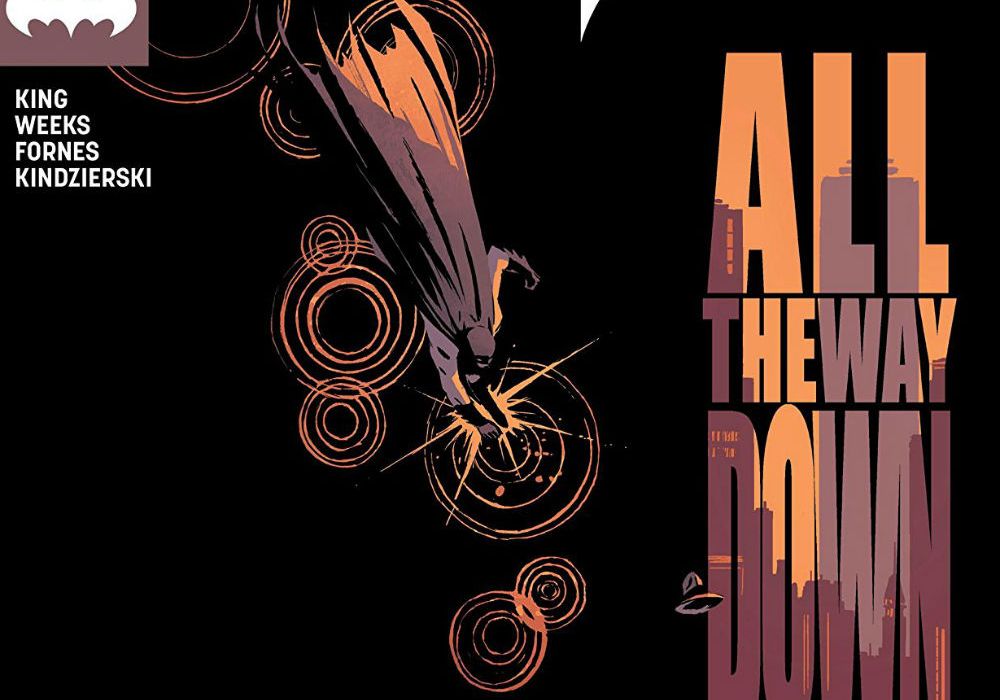 As experimental as they come, “Batman” #67 is another twisted issue of the ‘Knightmares’ arc, where the caped crusader deals with some fairly unique foes and situations. Warning of mild spoilers given they vert nature of this issue. 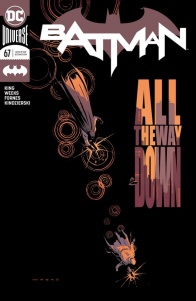 The “Knightmares” continue as Batman chases a new foe in an impossible race. Over rooftops, across alleyways, up and down the streets of Gotham City, this lightning-fast crook outsmarts the Dark Knight at every turn. Is that because the man under the mask is someone more familiar than he knows? Artist Lee Weeks returns to BATMAN for an all-out action issue unlike any you’ve seen before.

It has been well-explained by DC editorial that Tom King’s run on “Batman” is actually one single narrative, one single adventure with multiple segments and many moving parts. The current arc, ‘Knightmares,’ is a significant departure in terms of the more structured approach the writer has adopted until now. Told almost like a “done-in-one” storie, focused on one or more aspects of Batman’s psychic and trumps, these issues have been far less about how to move the plot forward, and more about exploring the deep nature of the trauma that Bruce Wayne is going through, under the machinations of Bane and his network of foes.

And while, even amid such distinct scenarios, past issues had some resemblance of plot evolution and some linkage to the overall themes that “Batman” as a series is exploring, issue #67 is a different animal altogether. It is light on script, heavy on amazing visual storytelling and a big head scratcher for even the most hardcore readers. Part nightmare, part “Watchmen” (yes, really), and part Looney Tunes (yes, really really), this entry must be examined from a different angle.

First of all, the drawings by Weeks and Fornes are nothing short of incredible. It should be obvious to readers, right from the opening pages, that “Batman” #67 was an issue with little guidance on the scripts as to what is actually going on. Other than a general direction of movement (forward and downward), there is little delineation in terms of story beats or sections. The instructions to the artists could have been as straight-forward as “Batman chases masked man across Gotham City, from rooftop to sewers,” and it would still be a valid (if simplified) version of what happens on the printed page. However, the manner upon which this succinct storyline is shown makes all the difference.

The most remarkable note is how Weeks and Fornes pace the action, on page and panel layout. Characters escape panel borders, forcing movement forward. The diagrams on each page mimic that of the direction the main players are heading towards. Parallel structures seem to play on how the hero and the villain archetypes are not so different from one another. All of those choices como together for a comic that is truly kinetic, deep, but without losing its sense of detail and background. It feels at times like reading the work of masters like Joe Kubert and, yes, Will Eisner. Really that good.

A sometimes unsung hero of comic art, letterer Clayton Cowles has a major contribution on this issue, which is somewhat unexpected, considering that “Batman” #67 is almost devoid of any dialogue. It is, nonetheless, on sound effects and text blurbs that Cowles excels. From the choice of font, to sizing them, to placing them strategically as a combination, a layer of the art… it most obviously serves a narrative purpose.

Back to King’s script. It can be said, with no concerns, that is takes bravery to suggest and produce a comic issue like this one. Positioned in the middle of the second half of a 100 issue run, with so many questions on the main plot still emerging; to pause this evolution dead on its track, to essentially narrate a complex chase sequence, in a dream-like state, is not something usual.

And, still, King makes “Batman” #67 a worthy issue if, for nothing else, on how it shows the plethora of stories that can be told using the caped crusader. This is an elegant, contained, deranged of an issue. When examined on the broader context of this arc and run, it will be probably be seen as the deepest precipice that Batman found himself at (“all the way down”), and where he had no where else to go… but up. If Batman is the archetype of overcoming challenges, of rising, no matter what, from now matter what hole one finds himself in… then “Batman” #67 is the visual interpretation of that, taken to its extreme.

Final Verdict: 8.0 – By trusting on their artist companions to deliver a breath-taking visual narrative, Tom King delivered a powerful self-contained issue, but one that positions the plot to emerge on future entries.