Tom King, Mikel Janin, and Jordie Bellaire bring the crazy in “Batman” 73. It’s the type of crazy only a comic can do. And I can’t say I have loved all of Tom King’s “Batman,” but I love the madness of this issue. Spoilers Ahead. 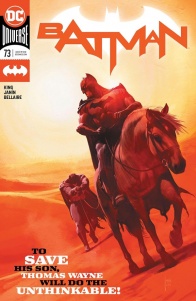 “The Fall and the Fallen” part four! Batman has been defeated by Bane’s minions and chased out of Gotham. As a last-ditch effort to save his son from the lonely fate of being Batman, his father from another universe, Thomas Wayne, a.k.a. the Flashpoint Batman, is taking Bruce to the far ends of the Earth to try to give him the one thing that will cause him to give up crime-fighting for good

In most of “Batman” 73, Batman’s dad from ‘Flashpoint,’ who is Batman in his world, is traveling horseback through a desert with a captured and drugged Bruce Wayne while nonchalantly carrying an ominous tune. On top of that, let’s not forget about the casket that is being dragged along. If that’s not enough, there are desert ninjas, aptly calling themselves “The Death in the Desert,” along this journey too. As I said, King, Janin, and Bellaire are bringing the crazy in “Batman” 73 and this is only the beginning.

Who’s in the box?

I don’t care about Bane and his continuous attempts to “break” the Bat. (Maybe because now I just think of Tom Hardy’s version of Bane?) That’s old news. But once it is revealed a crazy version of Batman’s dad is trying to resurrect his mom, I’m all in. It’s a situation we haven’t seen Batman in before. It’s weird enough that he has to interact with a version of his dad who is essentially Batman too and now he has to deal with the fact that his crazy “father” from another universe wants to resurrect his mom. What’s Batman going to do? Since we know Batman will eventually win the day, I guess a better question is, how will this change Batman? “I’m so proud of you son” is probably words Batman has always dreamed of hearing. Though you know Batman knows it’s wrong, I bet there’s a little piece inside of him that does want to bring his mother back. It’s apt that in interviews, Tom King says that he was influenced by Grant Morrison’s run on “Batman.” Because similar to Damian Wayne’s death in Morrison’s run, I think what’s going on in “Batman” 73 is opening up a new lens to view Batman’s psyche. As cheesy as it is to say, I guess you could say Tom King is the one “breaking” the Bat.

“Batman” 73 is not just a crazy comic. It’s a beautiful one. Mikel Janin’s art and Jordie Bellaire color together is really something special. The desert night and purple evening sky have never looked so beautiful. (Sidenote: DC, Can we get a Jonah Hex western book from Janin and Bellair?) The use of red in this book really sets the tone too. Those crimson eyes of Flashpoint Batman are not something you want gazing at you. Even Bruce’s eyes say a lot. Near the end of this issue, just from the look of his eyes, the reader is told that Batman is plotting to put an end to his father’s plan. And in contrast, Thomas Wayne’s eyes look sadistic glaring back at Bruce. When he’s in his suite, Flashpoint Batman’s red eyes tell a tale of darkness. He’s obsessed with his mission of his son not being Batman.

Besides the beautiful art and comic book craziness, “Batman” 73 stands out because this feels like the beginning of the end for Tom King’s Batman. We know this because of the recent announcement from DC and that Tom King’s “Batman” run will spinoff to “Batman and Catwoman” (Which I am very excited about). Even if that wasn’t announced, “Batman” 73 seems like the logical beginning of the end of Tom King’s run on “Batman.” Ever since Batman from Flashpoint was teased, it was obvious his involvement was going to big. That he was going to be a part of the final chapter or at least an important chapter. It’s taken a long ride to get to this moment. For a while now this series has felt like it was spinning in circles, but I’m glad the story is finally moving along. There have been moments that have been great, like Batman and Catwoman’s romance or the one-shot involving Swamp Thing, but there have also been moments like the ‘Nightmare’ arc where I was left feeling like Batman does in “Batman” 73, confused and dragged along. Though I’m sure looking back once Tom King’s run is over, the pay off will be worth and will be a great read in an omnibus, but hey, I digress. At this moment in time, I’m glad “Batman” 73 feels like it is leading to something new. And no matter, I’m glad Tom King is trying something different with Batman and is amping up the craziness. Because of Tom King’s talent and a slew of beautiful art by various people along the way, I think the story being presented since the beginning is all going to pay off, even the bumpy turns that were taken. “Batman” 73 feels like it is setting us back on course to an epic finale.