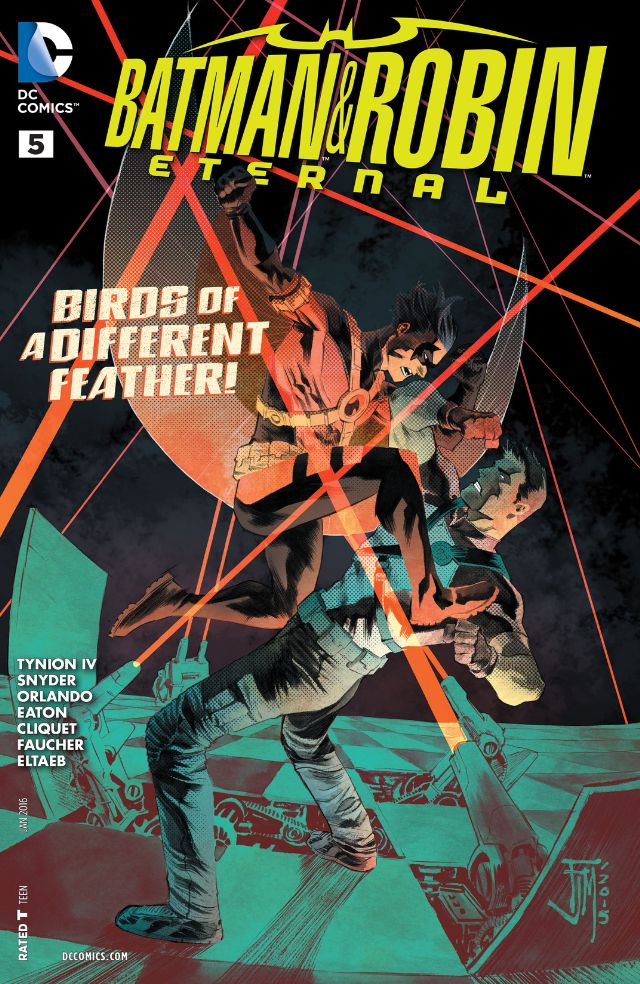 The Bat Family is in the weeds as they are closed in on all sides by the mysterious “Mother”. And could one of them be an unknowing traitor? Let’s see. Beware: Some Spoilers Ahead. 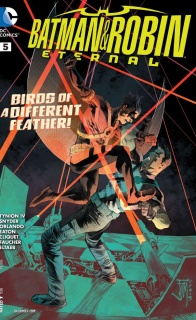 Grayson vs Red Robin! Grayson digs deeper into Red Robin’s true origins. Will he find the answers he seeks, or will it splinter the Bat-team forever!

I don’t care about Mother.

I know that may seem like a strange way to start this review, but after reading this issue several times my thoughts from my review of issue #1 have not changed on that front. The whole mystery and intrigue behind Mother and Orphan have been coming off very flat and been-there-done-that for me. It is only being compounded by this issue, which is taking a closer examination of the “origins” behind one of my favorite characters, Tim Drake.

Let me just get one thing out of the way: Steve Orlando and the rest of the writing team have my eternal gratitude for a couple things. I really did enjoy some of the cheeky nods to Tim’s history like the Drake residence’s address number being 436 (after Batman #436, the first appearance of Tim) and Dick using the alias “Lyle Dixon” (an amalgamation of the writer Chuck Dixon and artist Tom Lyle who helped define Tim in his early days) when talking to the Drakes. And yes, this officially confirms that Jack and Janet Drake are alive and well in the DC Universe. Which is a great thing, because one of the worst stories from Pre-Flashpoint, “Identity Crisis”, believed the best idea for Tim was to make him an orphan and push him to be more like Bruce. And while there are those who believed that may have been better for the character, I vehemently disagree. It is just nice to see them back on the table to draw more compelling stories. It just felt good to see Tim reunited with them.

Orlando also handles the scene between Cassandra and Harper really well too. After the last two issues where Stephanie and Tim say some really out of line things in regards to Cassandra’s lack of speech equating a lack of intelligence or humanity, it is nice to see Cassandra in a more vulnerable and soft position after an encounter with Orphan. And Harper’s own insecurities from Orphan’s words, that she’s only looking for another person to help, like her brother (speaking of, where did Cullen go? Like seriously, that was some serious “Shoo Out The Clowns” trope a couple issues back). It is some subtle character work, but enjoyable.

What really got to me with this issue though was the fight scenes. Look, I get it. Fight scenes are intrinsic to the superhero genre. But when the character work I had been enjoying seems to be cramped up to make way for three different fight/action scenes, it just makes the whole thing feel very muddled and a slog to get through. I want to compare this to another book that came out this week: “The Vision #1”. Now, in my opinion, “The Vision #1” is aces and you should read it. One of the reasons I liked it so much was its violence (really constrained to the last couple of pages) had a purpose specific to character interactions that lead up to it. Here though, three different fight scenes and it all feels like padding to me.

What doesn’t help it is the artwork. Now, this book has three separate pencil/inker teams; Scot Eaton & inker Wayne Faucher, with Cliquet and Pugh inking their pencils. Now, I did grow to like Eaton/Faucher’s work over in ”Imperium” and Steve Pugh did wonderous work with Jeff Lemire over in “Animal Man” and even Ronan Criquet has some smooth artwork a bit reminent of Mikel Janin. But, and now I could be wrong, a lot of this artwork feels rushed and many of these fight scenes feel incredibly unchoreographed and the art styles don’t mesh well. Witness Dick Grayson in angles that even the most insensitive depictions of ladies in comics go “‘Hey now!” and watch Cassandra go from one panel dodging a sword to being on the ground in the next. And this may just be me because my ideal depiction for the character comes from artists like Marcus To, Trevor McCarthy and Dustin Nguyen, but Tim seems really buff in this book. Colorist Gabe Eltaeb does his best to try and make these differing art styles mesh but it only works to a fault.

And then finally, the whole “Red Robin’s true origins” thing. Now, while based on what we see here – which is left intentionally vague – it doesn’t completely contradict Tim’s origin in “Teen Titans #0” (although I am glad it seems to be that the threw out the idea that his name is not really Tim Drake. Thank the Gods), but what it does imply, especially with the whole “mystery” around Mother, only seems to put more unnecessary complications on one of the simplest origin stories of the last two and a half decades.

I won’t lie, part of what colors my impressions of this issue and what has come so far is my lack of patience after waiting four years to finally start seeing these character relationships being reestablished after DC decided that throwing babies with the bathwater was such a great idea. I think I will be more happy when “Batman & Robin Eternal” is over and perhaps some books starring these characters in smaller bunches are launched. But the biggest sin this issue commits is that it was just boring to me.

Final Verdict: 5.4 – Some little bits of character dynamics that feel pushed aside by uninspired fight scenes.