Warning! This review will contain major spoilers for the video game Batman: Arkham Knight. There’s literally no way to talk about this comic otherwise. So if you haven’t played Arkham Knight, do not read on as I will be spoiling the good goddamn out of it in this review.

You have been warned! 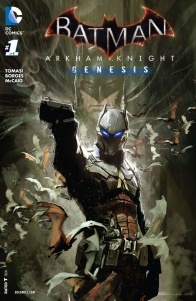 On their episode about Batman: Arkham Knight, Rich and Jack at Previously Record talked about how Arkham Knight is a bad story told well. That Rocksteady Studios are amazing storytellers, but that they were saddled with a story that wasn’t up to par. I would agree with this assessment, honestly, but I think there’s something else to it: I think the universe of the Arkham games was fundamentally flawed from the start. In Arkham Asylum it was presumed that the events of the story were taking place in a universe akin to the post-“Infinite Crisis” comics and/or the DCAU. With Arkham City and especially Arkham Origins we began to see things deviate as the games began telling their new versions of the stories that built the Batman mythos like the origin of the Joker and his first encounter with Batman.

Fast forward to Arkham Knight and you have the finale to a story that has a very unstable foundation, drawing itself into a corner by trying to be a new take on this mythos, while still having that foot in the idea of being based on the comics thanks to Arkham Asylum. That leads to the biggest problem with Arkham Knight: the identity of the Knight himself. While I could say that having the Arkham Knight be Jason Todd was a pretty uninspired choice and almost everyone guessed it immediately even despite Rocksteady’s attempts to obfuscate his identity, but that’s not really the problem. The problem was that because of the unstable foundation that the game is built on, Arkham Knight had to pull double duty and be both “Death Of The Family” and “Under The Hood,” as Jason Todd had never been mentioned in any of the prior games. Suddenly we were getting flashbacks to his capture and torture by the Joker and it literally couldn’t have been anywhere else.

Which brings us to “Arkham Knight: Genesis” #1, the first issue in a six issue miniseries that looks to follow Jason Todd’s journey into the game. It’s a prequel in the most classic sense as it essentially shows the point of view of Todd planning the events of the game. However, much like the game it’s a prequel to, this is a bad story told well and it comes complete with all the same problems. The issue opens in a rather confusing fashion as we’re dropped into a conflict between Hush and the Ratcatcher, with only the slightest hint of what’s going on, before the Arkham Knight drops in to beat up Ratcatcher and save Hush. This sequence immediately had me worried about how the rest of the issue would turn out as it’s a muddled introduction that doesn’t bother to establish where or when the action is taking place or really what is happening. It seems like it was just an excuse to hit the ground running with the Arkham Knight’s introduction.

From there, Tomasi and Borges transition into exploring Jason Todd’s origin story with the Arkham universe. This is where this issue spends the most time and suffers from the same problems the games faced when re-telling origin stories. Because the Arkham universe never really established Dick Grayson’s time as Robin or his transition to Nightwing, it’s something that’s skipped over entirely here and we’re presented with a somehow grimmer and gritter version of Jason’s post-“Crisis On Infinite Earths.” Gone is Batman discovering Jason jacking the tires of the Batmobile (because, admittedly, that was very 80s,) and instead he is the son of two meth addicts who are in debt to the Falcone family. He grows up to be a common street criminal who comes across Batman getting his ass kicked by the Joker in the auto-loader from Aliens.

While the structure of Jason’s origin is well told and the artwork is fantastic, it’s the meat and potatoes of this issue that fail. There’s no real motivation to anyone’s actions. For an issue that is meant to fill in the gaps of Jason’s origins in Arkham Knight‘s story, it never establishes why Jason would help Batman or why Batman would allow this kid to be the new Robin. Halfway through this issue, I found myself wondering if Jason Todd is a fundamentally flawed character who barely makes sense within the world that he exists in. But those are thoughts for another time. What I’m trying to say is that this is a story that fails largely because it was built upon rocky ground. The writing itself is solid and the action throughout the issue (with the exception of the opening scene) is exciting and well put together. The most unfortunate thing about this issue, perhaps, is how wasted Allison Borges feels.

Borges perfectly captures the moody, gritty atmosphere of Gotham and blends the outlandish reality of the Bat-characters with the sense of realism that was pushed in Arkham Knight. Borges uses a lot of heavy shadows and deep blacks to cast the comic in a rather oppressive atmosphere that nails the feeling that Gotham is inescapable, something that comes up in the story a couple of times. The blend of dramatic, character-focused scenes that feed of the noir feeling of Gotham and the action scenes featuring Batman is perfectly balanced in Borges’ art. Excepting the first scene that feels like there was a page missing, the action in this issue is pretty stunning. The middle of the comic is taken up by a setpiece wherein Jason takes down the Joker and Borges shows off Jason’s athleticism in a very dynamic way.

A standout page in this issue is a montage of shots of Jason going through school presented as the fragments of a broken mirror with Jason’s face in the centre framed by an emerging Robin. It’s a beautiful page and the fragments of glass painted red hold a lot of tragic symbolism for his eventual fate as the Red Hood. Unfortunately, we don’t get to see much of Jason as Robin in this issue, only the one page, and that’s a shame as I think Borges could have brought a Batman and Robin team-up fight to life in an amazing way.

Overall, “Arkham Knight: Genesis” #1 suffers from many of the same story problems as Batman: Arkham Knight did. It became clearer and clearer with each game that Arkham Asylem was never planned with a guaranteed sequel in mind, and the unexpected success of the game meant that Rocksteady had to marry this comics-inspired backstory with their own takes on the characters going forward. That meant the decision to have the Arkham Knight be Jason Todd required them to introduce, kill and re-introduce Jason all in the same story. This has lead to this comic which is a prequel to a story that isn’t the best to begin with and feels like it isn’t sure what to do with itself. The scenes between Arkham Knight and Hush don’t really go anywhere and this interpretation of Jason’s origin isn’t exactly terrible, but it could have benefited from not being crammed into one flashback.

At least it looks pretty.

Final Verdict: 4.8 – I don’t know if there was any way to wrangle a good backstory for Jason based on Arkham Knight, but this wasn’t it.