In the wake of “Convergence” DC launch a whole new roster of books, including a blast from the past (and presence from the future) in “Batman Beyond” #1. 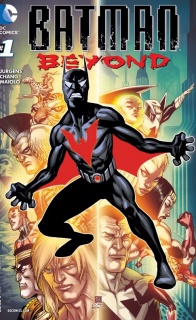 At last, Batman Beyond gets his own ongoing series in THE definitive future of the DCU! But this isn’t the Beyond you think you know! With the Justice League missing and without Bruce to guide him, this new Batman will need to explore this bizarre world on his own, while fighting to raise humanity from an opponent that’s already won. The heroes Batman knew have failed, the world he knew has been turned on its head, and every step he takes will lead him either toward finding home—or further down the road of disaster!

Like many children of the late nineties/early noughties, Bruce Timm and Paul Dini’s Batman Beyond TV show was a pretty big deal as far as my formative comic-book years were concerned. Despite its relatively short-lived run time the show received some pretty heavy critical and commercial acclaim, as well as managing to create an original protagonist who gained enough popularity to make the jump from TV to comic-books, ala Harley Quinn. All of this combines to leave Jurgens and Chang pretty big, nostalgia-fuelled Bat-Boots to fill

The premise of the original show was pretty straightforward. In the far flung future of 2019, an ageing Bruce Wayne finally decided to hang up the cape and cowl after a decline in his physical prowess forced him to wield a thug’s own gun against him (which, if my calculations are correct, means that we’ve got just under four more years of Batman left… DC had better get a move on with their Justice League film). Twenty years later, after Neo-Gotham has all-but succumbed to criminality, newcomer Terry McGinnis stumbles across the reclusive billionaire’s secret and vows to take up the mantle of The Bat to fight crime.

Jurgens and Chang have thrown out this tried-and-tested methodology in favour of something that shakes up both the Bat-Fam and the world at large for this futuristic Batman’s first proper integration into the DC Universe.

During the events of ‘Futures End’ we saw Terry McGinnis involved in the near future of the DC Universe, but he’s nowhere to be found in issue one of ‘Batman Beyond’. Instead, it’s Tim Drake that has been catapulted thirty years into the future and into the limelight for this book. But Jurgens doesn’t give us much time to get our bearings, as he launches straight into a tussle between the newly suited and booted Tim and a bunch of instantly recognisable ‘Jokerz’. Jurgens version of the suit stays pretty true to Kyle Higgins’ portrayal as McGinnis wore it, complete with a fully-functioning artificial Alfred computer. This allows for some comfortably familiar bantering between Tim and the A.I. while he explores the city for the first time.

Jurgens and Chang have done a pretty solid job between them of creating a Neo-Gotham that feels both familiar and fresh. Chang claims to have drawn heavy influences from Sci-Fi superstar Syd Mead, and there’s a distinct, neon-soaked, Blade Runner vibe to Tim’s new surroundings. That being said Neo-Gotham definitely feels cleaner and, in the words of Tim ‘almost beautiful’. But that beauty comes at a price. As the issue opens Alfred is filling Tim in on a piece of Wayne-tech called the ‘Veil’, which protects Neo-Gotham from a shadowy entity who seems hell-bent on destroying the world. As the issue continues and Tim is forced to leave the protection of Neo-Gotham we see that it has only kept itself safe by turning its back on the suffering of the rest of the US, and potentially the rest of the world.

Chang’s execution of an almost uninhabitable version of New York is an impressive counterpoint to the shining metropolis of Neo-Gotham, and the obligatory panel of a listing, statue of liberty is definitely a humbling one. Jurgens’ and Chang’s representation of a futuristic dystopia may not be all that inventive – either perma-night mega-cities or endless wastelands recognisable only by crumbling monuments – but it’s familiarity isn’t necessarily a bad thing, as it does away with almost all exposition, allowing for very smooth first issue.

And, as first issues go, this is an impressively fluid one. Working hard to capture the relentlessly kinetic nature of its source material, “Batman Beyond” issue 1 has barely a single page without Tim soaring through the sky, and his constant movement is mirrored in the pacing, which clips along a nice rate. This is great to see, as Chang clearly has a handle on what makes for an exciting physical sequence. Only one of the two main altercations in this issue falls a little flat, an undersold brawl between Tim and a familiar face from his past.

This is one of two instantly recognisable characters that crop up in this issue and both feel kind of shoe-horned in. That might be my only real issue with Jurgens’ and Chang’s otherwise pretty perfect introduction to DC’s new future. As this incarnation of “Batman Beyond” is already being touted as finally being canon, the big, earth-shattering changes actually matter here. Creating a future dystopia is all well and good, but having a cataclysmic event occur that may have killed off multiple Justice League members and suddenly I’m worried we’re wandering into retcon/alternate universe territory again. That being said, it’s only the nitpicky, uber-nerd in me who’s bothered by these kinds of story infractions, on the whole I’m much happier to see great stories being told that only tangibly relate to one another than stories that become so intricately linked they lose any semblance of interesting narrative.

Final Verdict: 7.2 – A smooth, stylish re-introduction of Neo-Gotham and the “Batman Beyond” legacy. My inner eight-year old can’t wait to see how this develops.