“Batman: Damned” answers a question about Bruce Wayne, but has nothing to say about Batista. 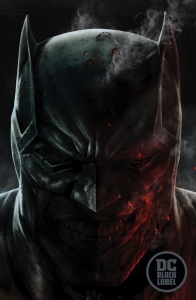 The Joker is dead.

There is no doubt about that. But whether Batman finally snapped his scrawny neck or some other sinister force in Gotham City did the deed is still a mystery.Problem is, Batman can’t remember…and the more he digs into this labyrinthian case, the more his mind starts to doubt everything he’s uncovering.

So who better to set him straight than…John Constantine? Problem with that is as much as John loves a good mystery, he loves messing with people’s heads even more. So with John’s “help,” the pair will delve into the sordid underbelly of Gotham as they race toward the mind-blowing truth of who murdered The Joker.

“Batman: Damned” marks the official launch of another DC imprint, the Black Label. The solicit proudly proclaims, it puts the “black” in Black Label. But does it really, and what does that even mean? With a creative team like writer Brian Azzarello and artistic polymath Lee Bermejo it isn’t hard to imagine something with a bit of edge to it. Maybe, even something approaching “S”erious – I mean that with all the pretentious irony in the world. The marketing and overall messaging around “Damned,” and this imprint, has traded in the juvenile male idea of maturity. Which always seems to be the case when dealing in highly aestheticized texts, as Azzarello and Bermejo do things normally unseen in the pages of a DC comic. Stuff like silhouetting Bruce Wayne’s penis in the pale light of the Batcave. At least in the print copies, this Batfamily member was digitally inked over in the digital release. All this fawning over transgressions does is fail to contend with “Damned” as a piece of sequential art and the choices they make. For all the posturing “Damned” feels more in spirit with Bermejo’s “Noel” than the duos previous work in “Joker.” The first issue of this three issue over sized miniseries reads like a fanciful nightmare, where the mythic characters of the DC universe play roles in a weird detective story. The Joker is dead and Batman isn’t quite sure if he did the deed, all the while a cadre of DC’s supernatural characters guide and mislead the world’s greatest detective’s search for truth on a supernatural journey of horror.

Books published with the Black Label are being printed in what is known as square bound, which makes them roughly magazine size. The technical differences aren’t much but seeing the pages take up the full width of an iPad, with minor vertical letter boxing, easily created the impression of size. Bermejo uses this extra size to emphasize the size and spatial relations of objects. Everything looks spooky when it’s so much bigger than the hero. Tim Burton and Anton Furst imagined a Gotham City as if hell had burst threw the pavement and kept growing through the juxtaposition of dissonant architecture. Bermejo takes a more literal approach to things as seen early on after a wounded Batman escapes an ambulance. He kneels looking around him at a Gotham that seemed to have kept growing on top of itself. Skyscrapers slowly fade away into a mixture of cloud and pollution, a megalopolis built out of 70’s architecture. The page is two panels, the image of Batman and the city is a splash with a single panel overlaid it at the top. Inserting the panel dose not lessen the impact of seeing Batman and Gotham City, it still takes up two thirds of a page with skyscrapers on the flanks threatening to overtake everything. Bermejo’s uses of perspective and the overall size of a single page has me curious to see what a double page spread would look like, “Damned” #1 only features single page splashes.

Bermejo’s decision to often lay panels atop one another helps gives pages and the sequence strong readability without sacrificing imagery. In one sequence as Bruce recalls a trip to the park, Bermejo uses a single large image to ground everything, with subsequent panels forming their own almost micro comics around it. These sort of scenes within scenes, mixed with Bermejo’s decision to transition on matching imagery give this issue a strong technical footing for the grim imagery and dreamlike quality of the issue.

If there is one noticeable technical flaw in Bermejo’s work this issue it is the lettering. Helping guide the reader is the impish narration of John Constantine, which Azzarello writes with an unsurprising level of awareness. This narrative chorus often frames the page thematically and literally. In a couple of instances the pale white used for the text fails to stand out against the common grey tones that litter pages leading to some muddy bits of text. As a digital reader it wasn’t too much of a problem, you just pinch to zoom in, but it was a slight annoyance.
“Damned” is a three issue miniseries at 50 pages an issue. Even with that extra page budget, the more rigorous structure side of me wishes a bit more was done in this opening act. It broadly does what needs to be done, introducing us to the conceit and players. On the other side, “Damned” exceeds at what it set out to do this issue: establish a mood. This is a murder mystery where Batman is delirious and uncertain if he actually killed the Joker, concrete answers aren’t a thing to look for in a first issue. By focusing on mood, “Damned” better places the reader in the scattershot perspective of Batman as his nightmarish existence appears to unravel even further.

Tonally “Damned” reads akin to “Batman: Noel,” there’s a dreamlike quality to it with how page transitions work and the overall subject matter. A tonality that is partly established through flashbacks to a young Bruce Wayne, where he is a kind of dumb kid who is neglected by his parents. These flashbacks also hint at some sort of sinister manipulation, or marking, of Bruce to become the Batman that is yet to add up. What it does is re-position Bruce Wayne and the figure of Batman, as a mixture of penance and attempt to attain recognition – which he lacked from his parents. At the same time there are also hints of the Batman persona as toxic and degrading Bruce Wayne the man, particularly in a sequence that mirrors interactions between man and suit like in Batman v Superman. The first issue gives readers the idea that being Batman is a constant nightmare, damnation was from the start not something he may have sinned his way into.

“Damned” is more than what it does compared to other DC books. It trades in a dark and grimy aesthetic, but one powered with supreme technical skill. For all the potential deviations it makes from Bat-canon, the most freighting thing it does is a recognition of the nightmare being Batman must be.

Final Verdict: 8.0 – “Damned” may protest a bit too much to it’s edgy sensibilities, but below the surface is a well put together darkly beautiful book about a haunted man in a haunted world.