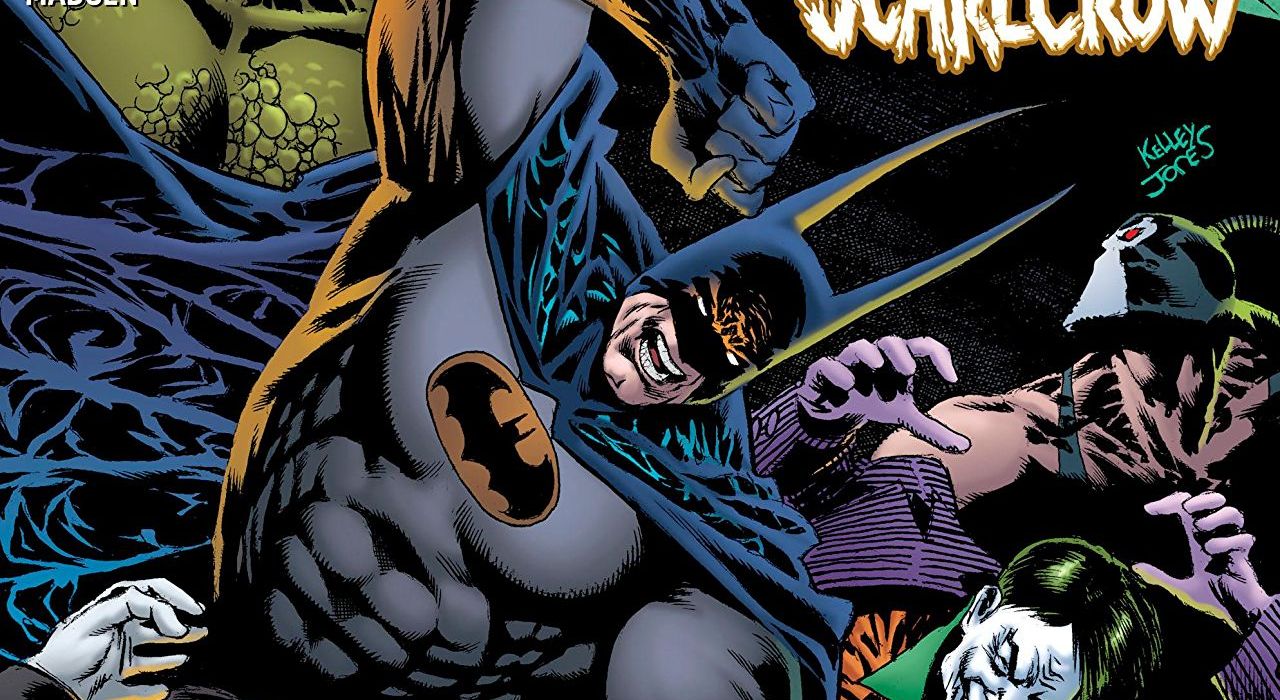 If you are on the lookout for a Batman tale that steps away from the current on-going series, ‘Kings of Fear’ might just be the mini-series you need in your life. Readers of 90s Batman will have plenty to love here. Mild Spoilers Ahead 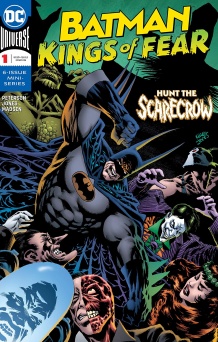 The Joker has once again broken out of Arkham Asylum and is plotting his next diabolical scheme when the Batman shows up to foil those plans and drag him, kicking and laughing, back to his cell. This is where Batman’s troubles start and bringing peace back to Arkham and Gotham City will not be an easy task.

Upon his capture, Joker is strapped into the, occasionally seen, backseat of the Batmobile and begins his attempt to slip through a crack in Batman’s psyche. As he makes these attempts and assumes he is getting to Batman he quickly learns that the dark knight is no more than annoyed and has no time for the Joker’s ploys. The sequence is very similar to the opening scene in the first Arkham Asylum video game and is the first of many references to past Bat-lore.

As he places the Joker back in custody, our hero gets an earful from an irritated doctor who claims Batman is the real problem here. He quickly throws it back in her face just as all hell breaks loose. An alarm signaling a breakout goes off. Batman rushes towards the danger and is greeted by some incapable hospital staff and then, of course, seven of his worst foes – including the Joker. It seems Joker’s plan was to be caught all along to ensure the success of the true mastermind behind the mayhem.

This issue uses broad strokes to cover the psychological aspects of Batman and his villains; just enough to get the point across. It’s the chicken or the egg scenario. Was Batman created because of Gotham’s villains or do they exist because he does? And if he ceased to be, would the Rogues Gallery as well? Is their obsession with each other the very thing that keeps them going? This is something we see time and again in these comics. While nothing new is brought to the table, it is a plot device that works to this day.

I have not felt this much unabashed joy reading a “Batman” comic in quite some time. As great as many of the grand over-arching plots of the last 20+ years have been, including most recently, Scott Snyder and Tom King’s stellar runs, it is a delight to be able to pick up a Bat-book that can be read by anyone that knows the character and does not need to read 5 long boxes of back issues to enjoy. Taking us back to the dark, uncomfortable and Gothic tones that made up the bulk of 90s “Batman,” ‘Kings of Fear’ is the homage we didn’t know we needed until it was here. There are so many references and nods that it took more than one reading to notice them all.

Written by Scott Peterson, who was the head editor of major Batman titles from 1991-1998 and author of many issues of “Batman: Gotham Adventures” from 1999-2003, there are few others who are as equipped to write such a book as this. He brings the character back to his broodiest, bulky-yet-spry, long-eared glory. Readers of that decade’s “Batman,” “Legends of the Dark Knight” and “Shadow of the Bat” will welcome this with open arms. This book resides in an era of a more questionable, cynical, and unstable Batman, one who was harder to relate to than most other versions of the character. The mission was all he had. A side-kick was rarely in tow and his brutality came to the forefront in many stories as a response to whichever sociopath he was dealing with. Peterson uses all of these qualities here to great effect.

Masters of their craft, Kelley Jones and Michelle Madsen are a dream team for this book’s artwork. They beautifully re-create past iterations of most of the characters. Mr. Freeze is directly pulled from Paul Dini & Mark Buckingham’s 1997 graphic novel, Bane is in his classic Knightfall glory, and so on. Jones covers the pages with big, thick lines and deep, heavy shading with absolute perfection for this throwback series. Characters are bulky; they completely fill the space they’re in. Proportions are distorted or are less than realistic at times. Artistic license is given to tell a compelling, fantastical story. They walk a fine line of reality and mythology as many a classic comic book does. Madsen’s colors are bold and dense. No light comes through. Her tones meet the classic standards for every character. Jones’s and Madsen’s work drives the nostalgia meter into the red. Batman is even driving the Batmobile from Batman: The Animated Series!

Like Len Wein and Kelley Jones’s six issue “Swamp Thing” mini-series in 2016, this is a book out of time meant to invoke a particular era. “Kings of Fear’ will transport you to the 90s, if you, like I, were reading them as a kid in your room, or at any age, you will be hard-pressed to not enjoy this. Jones’s use of panels is not only a great callback to days of comics past, but he knows exactly how to frame the stoic to the chaotic. The issue looks incredible from cover to cover. This issue is not reinventing the wheel, challenging the reader, nor is it anything new to “Batman.” However, it’s a great read that fans new and old will have fun with. It’s a solid intro to what will hopefully grow and build into something more than just sentimental adoration. It is a little weird to be praising this book this much knowing that it is chock full of been there, done that, but it is too much fun to pass up.

Final Verdict: 8.0 – ‘Kings of Fear’ #1 is a love letter to the “Batman” comics of the 1990s that is a welcome tangent from the current continuity.