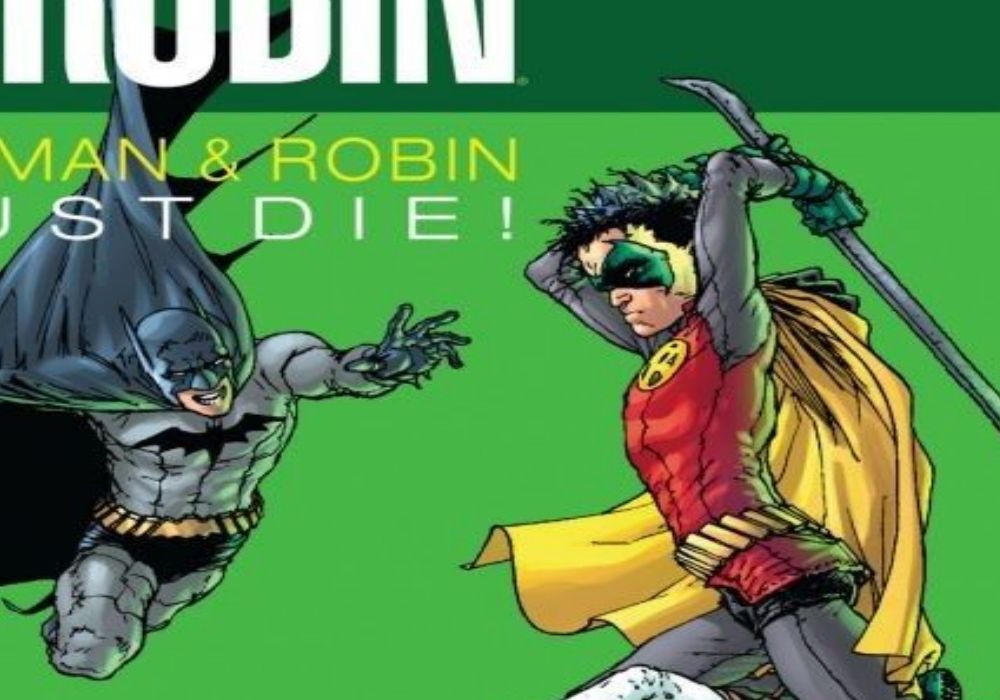 When Batman supposedly died about a decade ago, nobody was surprised to see him come back after a while. That didn’t mean fans weren’t excited to see how his return would happen, creating various theories and trying to connect the dots in Grant Morrison’s Batman mega-epic. While Batman’s travels through time were depicted in The Return of Bruce Wayne, the simultaneously published “Batman & Robin Must Die!” arc told the story of Dick Grayson and Damian Wayne’s Dynamic Duo trying to save Gotham City from a macabre chaos mere moments before Bruce Wayne’s return. Years later, Morrison’s final arc on “Batman & Robin” still makes for an enthralling read with its deliciously disturbing atmosphere and high stakes. 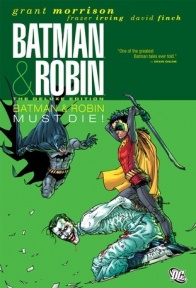 Cover by Frank Quitely
Written by Grant Morrison
Penciled by Frazer Irving, Cameron Stewart, Chris Burnham and David Finch
Inked by Frazer Irving, Cameron Stewart, Chris Burnham, Ryan Winn and Batt
Colored by Alex Sinclair, Peter Steigerwald
Lettered by Patrick Brosseau and David L. Sharpe
Grant Morrison’s best-selling run on BATMAN & ROBIN continues with this volume collecting issues #13-16 and BATMAN: THE RETURN #1. On the eve of Bruce Wayne’s return to Gotham City, the new Batman and Robin team that battled crime during his absence must deal with the deadly return of The Joker.Then, Grant Morrison connects BATMAN & ROBIN with the best-selling THE RETURN OF BRUCE WAYNE for the climactic showdown between Batman and The Black Glove.And in an epic tale illustrated by acclaimed artist David Finch, learn what happens to Dick Grayson after the “real” Batman returns.

The most enjoyable thing about this comic is the dark farcical mood crafted by both the plot and the artwork. Everything familiar about the Batman mythos gets twisted and turned upside down. The very title of the arc is an antithesis to the “Batman and Robin will never die!” exclamation from Batman R.I.P. The opening panel shows Thomas Wayne looking upon his murdered wife and son, satisfied with the situation. Robin beats the Joker with a crowbar. Batman’s most evil archnemesis defeats the villain of the story – by making him slip on a banana peel. Frazer Irving’s art style perfectly captures the feverish nightmare of Gotham descending into chaos, as he makes images that should look plain ridiculous look absolutely terrifying. Irving’s coloring is moody, and most pages have a monochromatic color scheme. One page having an orange hue, the next being pink and the third being blue definitely adds to the feverish feeling. The fill-in artwork in issue #16 by Cameron Stewart and Chris Burnham, with vivid colors by Alex Sinclair, is top-notch too. Having a few scenes with more grounded artwork balances out Irving’s creepy visions well.

Irving’s depiction of the Joker is especially disturbing, with eyes full of blood and a posture constantly crooked in one direction or another. The same can be said for Professor Pyg, but then again Pyg is character who has very little substance other than being as disturbing as possible. With the bad guys this style works very well, but occasionally the creepiness seeps also into the heroes’ facial expressions a bit too much. Morrison’s dialogue for the villains is just as twisted as the artwork, be it Dr Hurt’s discussions with what he believes to be the bat-demon Barbatos or Professor Pyg’s rambling metaphors. There’s nothing to complain about the dialogue between the heroes either, as Morrison meticulously orchestrates it like a true professional who knows these characters like the back of his hand.

Meticulous attention to detail is the name of the game not just in dialogue, but all the little references Morrison lovingly spread out over his Batman run. The three first issues are named after classic paintings, one of which appears in the artwork too. Many of the connections Morrison makes are very specific and obscure, like Pyg’s concealed references to real-life behavioral scientists. A prime example of this is the scene where Joker makes the devilish Dr Hurt slip on a banana peel using a cultivar of banana called Big Mike. Hurt falling thanks to “Big Mike” symbolizes St Michael casting the Devil down from Heaven. Your average comic reader probably doesn’t have expert knowledge on different types of bananas, yet alone understand them as metaphors for biblical stories, so this connection among many others has to be explained in the backmatter of the trade collection. The devil is in the detail, as they say. Still, the story continues with the more traditional style superheroing of the “Batman & Robin” title rather than the symbolistic sci-fi metanarratives of The Return of Bruce Wayne”, which was published at the same time as this arc.

With Commissioner Gordon turned into the villains’ lackey, the entire population of Gotham rioting in the streets under withdrawal symptoms from Professor Pyg’s narcotic, Dick Grayson captured and shot in the head by Hurt and the Joker setting a nuclear bomb to top it all off, the stakes are certainly high enough for Morrison’s finale on the series. The tension is crafted expertly, and the thought-out pacing prevents the story from turning into a cluster with too many moving parts. Only the ending is rather abrupt. Dick and Damian’s Dynamic Duo could have gotten a more triumphant victory together before Bruce Wayne rushes in to save the day. Sure, they continued their adventures under different writers after this, and it would have been absolutely lame for the just-returned Bruce Wayne to be useless to the conclusion of the story. Still, there is a feeling that the younger Batman is escorted to the hospital just to make way for the original, which isn’t the best possible note for Morrison’s last words on Dick Grayson.

The one-shot Batman: The Return #1 at the end serves as a sort of prologue to Batman Inc. but isn’t as well constructed as the main story. David Finch’s artwork utilizes a wide variety of angles and new designs but perhaps due to the inking it isn’t as good as it could be.

As a whole, “Batman & Robin Must Die!” entertains with a thrilling disaster plot and artwork perfectly fit for the macabre themes of dark comedy, creepier villains than ever, and devil motifs all over. The ending is the weakest part of the comic but by no means is it bad. It’s just more fun to watch the tension build and build than to have it finally resolved in the way you knew it would be, by Bruce Wayne returning to reign.