“Batman Secret Files” #2 features some of Batman’s more notorious (and more obscure) villains with a special tie-in to the “City of Bane” series, in five mini stories. Warning: spoilers ahead. 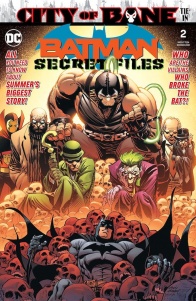 “City of Bane” is upon us! Bane’s conquering Gotham City, but he’s not doing it alone. In this Secret Files issue, read about Bane and his cabal: The Joker, the Riddler, Hugo Strange and the Psycho-Pirate. Brutal stories of madness, murder and hatred done by some of comics’ greatest talents!

“Batman Secret Files” #2 starts off with “If the Suit Fits,” featuring the Joker. The story is straightforward enough – Joker has finally captured Batman and is desperate to unmask him. However, his many attempts to do so are foiled by Batman’s protective gadgets and failsafes that he’s programmed into his suit. There are a few funny moments in this story, my favorite being when Joker gets a taste of his own medicine and gets zapped by a joy buzzer on page 3. However, the gag grows tiresome as he refuses to learn his lesson and continues to fall for Batman’s traps.

While the story is a bit repetitive and uninteresting, the artwork and coloring are excellent. Amancay Nahuelpan’s design of the Joker is creepy and at times slightly disturbing, especially as his face grows unhinged with anger as the story goes on. A great example is a wide panel of his face at peak madness on page 5. I also appreciate all the small details in the artwork such as the Joker’s black nails and the veins and wrinkles in his face. Overall, I would recommend reading this story more for the artwork as the plot is forgettable.

The second story in “Batman Secret Files” #2 stars Psycho-Pirate in “He Helps Us.” This character is a lesser known villain in the Batman universe, and you can see why in this story, as there is nothing fresh or interesting about him. Here he wears a Medusa mask that allows him to manipulate and control people’s minds, creating a cult following for himself. Batman goes undercover and saves the day the same way he did in the story right before this one – he punches the guy in the face. Batman easily overcomes Psycho-Pirate’s mind control attempt, which makes this climax fall flat. However, there is some notable action in this story like when Batman bursts into the ceremony room and he has to avoid a mob of followers on pages 13 and 14. Carlos D’Anda’s artwork is excellent, particularly the close-up panels, including the aforementioned knockout punch on page 17. However, the highlight of this story is the coloring by Luis Guerrero. His use of purple, pink, and blue hues provide a dreamlike atmosphere, which is perfect for a story about mind control.

Continuing with the trend of mind games, the next story in the anthology is “Alone,” and our main villain is the Riddler. This was a fun read and the editors even invite readers to solve Nigma’s riddle. The running clock and high stakes left me in suspense. The approach of the Riddler telling this story to an Arkham psychologists also provides an interesting inside look at his thought process. However, this part of the story ends abruptly and we’re left with unanswered questions, which is a bit frustrating. I would be interested in reading a longer version of this story. The artwork is solid and the beefy and menacing design of Riddler is interesting compared to other iterations.

My least favorite story in “Batman Secret Files” #2 is “Doctor of Psychiatric Medicine” which features Hugo Strange. In this story, Strange is obsessed with discovering Batman’s secret identity. This leads him to experiment and torture men with similar psychological profiles. The results of the experiments are brutal and the grotesque character designs by Eduardo Risso complement the blood and gore. His style is not for me, however intentionally ugly it is meant to be. Also, if you’re not a fan of lots of gore and torture, I would not recommend this story – exploding limbs are abound. The last page culminates the horror and violence in one large panel, which also reveals a dark and rewarding twist.

“Batman Secret Files” #2 concludes with Bane in “Alethephobia.” You’ll get more out of this story if you’ve been following the “City of Bane” series as this is a direct tie-in. However, the action and suspense do not disappoint, even if you’re a more casual reader. Bane looks like a beautiful monster thanks to the excellent artwork by Patrick Gleason. One of my favorite images is a large panel at the top of page 40, in which Bane towers over police and deflects an arsenal of bullets that they fire at his god-like body. For me this story served its purpose and got me interested in reading “Batman” #75 and prior issues in the series to get the full story.

The stories featured in “Batman Secret Files” are hit or miss overall. The standouts for me are “Alone” and “Alethephobia” because of the high-stakes storytelling and the connections with the readers. Whether you’re trying solve Edward Nigma’s riddle or wanting to get more backstory to enhance your “City of Bane” experience, there is plenty of entertainment in these two stories. While the other stories are pretty forgettable, the artwork still makes them at least worthy of a read.

Final Verdict: 7.0 – In “Batman Secret Files” the amazing artwork outshines the storytelling in the majority of the stories featured in the anthology. The Bane story, “Alethephobia” provides an added layer of backstory to “City of Bane,” which enhances the story for those following the series.