This is a review for an issue of “Batman/Teenage Mutant Ninja Turtles III”. I know I’m pointing out the obvious, but that simple fact just blows my mind. Think about how DC Comics and IDW Publishing both saw fit to bless us with a Batman/Teenage Mutant Ninja Turtles team-up mini-series. I can hardly believe that it happened once but here we are for a third time. Not to mention the animated film based on the comic. I mean, are you not entertained? What a time to be alive. 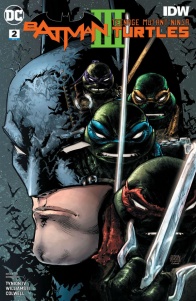 Written by James Tynion IV
Illustrated by Freddie E. Williams II & Kevin Eastman
Lettered by Tom Napolitano
Colored by Jeremy Colwell
Kevin Eastman, co-creator of the Teenage Mutant Ninja Turtles, joins series artist Freddie E. Williams II as guest artist for the second issue of BATMAN/TEENAGE MUTANT NINJA TURTLES III! Krang’s true power has been revealed, and now it’s up to Batman and the Turtles to stop him, but their only hope may lie with the strange, yet familiar, visitor from another world.

When reading this issue, I had a strong sense of déjà vu. The story felt very familiar and I finally realized I was thinking of the television movie TMNT: Turtles Forever. In case you’re unfamiliar, the enjoyable flick is basically TMNT: Into the Turtle-verse, revolving around multiversal turtles much like #2. At the end of the last issue, the original ‘Mirage Studios’ Raphael showed up and promised that “it only gets bigger and weirder from here”. Well folks, Raph didn’t lie. The Clan Hamato/Robin mash-ups are definitely wild, but they’re downright tame when compared to Anti-Monitor Krang. This insane villain has a fittingly insane plan too, combining two separate multiverses into one that he can control.

Krang is an intriguing foe in “Batman/Teenage Mutant Ninja Turtles III” #2 but the best character here is the original Raphael. I admit, it might be my personal bias making me feel this way. Everyone has their favorite ninja turtle and the cool but rude (or is it crude?) turtle is mine, beating Leo by a hair. In the original Mirage universe, the turtles are nothing like the child-friendly depictions we’ve seen since. The brothers are all more hard-boiled and gritty and Raph is the worst one. Basically, this version is Raph-squared. He could explain who he is at first, but he’d rather fight. When confronted with the massive Anti-Monitor Krang, his plan is simply to punch the guy. The turtle describes his original Mirage family as ‘freaking awesome’ and, again, he’s not lying.

At the same time, the issue isn’t completely without problems. For one thing, why does Krang need the Joker/Shredder mash-up? He’s basically the Anti-Monitor. THe Utrom’s got a robot army and cosmic power, it makes no sense. Another reason it feels so familiar is because it’s following the same beats as other team-ups. You know, the misunderstanding before the heroes come together. We’ve seen in it Batman v Superman and Avengers. It isn’t entirely this issue’s fault but if you see the same thing again and again, it starts to get a little old.

In the grand scheme of things, the problems with this comic just feel like nitpicks. I mean…it’s Batman and the Ninja Turtles. It’s fun, pure fan-service. The art really takes that fun to a new level. The main artist Freddie E. Williams II is joined by TMNT artist and creator, Kevin Eastman. The legendary Eastman presumably draws Mirage-Raph. It’s an inspired choice to leave the Turtle completely in black and white and its refreshing to have Eastman draw the turtle in the original style, down to the smallest detail. He’s the least colorful character in the comic but pops off the page and stands out the most.

The other characters look fantastic too. Anti-Monitor Krang is a delight. The Utrom has a menacing gleam in his beady black eyes, spittle dripping from his pointed teeth. He always seems wild and unhinged, a perfect fit for the character. The Progenitor Batman is reminiscent of Super Friends Batman and Adam West Batman. His physique is impressive but he’s not ‘ripped’ like Batman is often depicted today. The character constantly has a smile on his face as he works, noticeably more lighthearted than the Dark Knight is now.

The other Batman’s design is interesting. The bat-symbol is clearly spray-painted and the cape seems like some sort of trench-coat. It’s definitely the kind of ensemble he’d come up with living in a sewer. I really enjoy the design of Splinter and the turtles though. An Alfred/Splinter mash-up is great but the brothers are really something else. Each is matched to a Robin that fits their character. It really is scary how well they fit. Raphael is basically Red Hood and Donatello is definitely Tim Drake. Some fans may have pointed out the similarities before but it’s hitting me for the first time. I really could go on and on just about them.

“Batman/Teenage Mutant Ninja Turtles III” #2 is a wild ride, a thoroughly enjoyable read for the fans. The multiversal shenaningans are great and leaves the reader wanting even more. If we take Raph at his word, the next issue will be even bigger and weirder. I can’t wait.