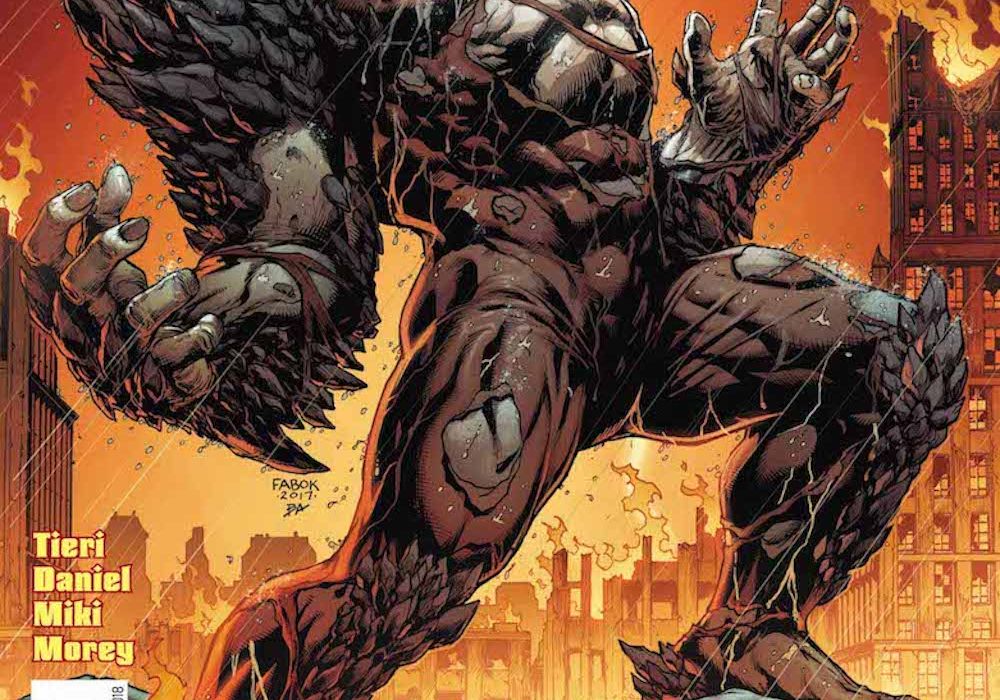 Abandon hope, all ye who enter here. Though not without its flaws, the tale of the hopeless Devastator remains an interesting, disturbing take on a superhero patient zero tale, just in time for Halloween week. 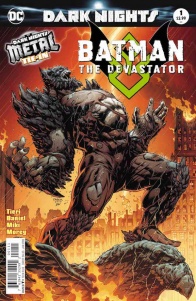 As the events of DARK NIGHTS: METAL rock the DC Universe, the creatures of the Dark Multiverse stand ready to invade our world! How can the World’s Greatest Heroes stop a horde of deadly beings that appear to be powerful nightmare versions of familiar figures? Find out in these special tie-in issues!

Like the rest of “Dark Nights: Metal,” “Batman: The Devastator” #1 is very well written, with its plot by Frank Tieri and its script by James Tynion IV. The present day story is presented as a viral infection narrative, like some vampire or other undead fiction, with particular emphasis on Superman’s wife and son, Lois and Jon. The use of a willing infectee and a patient zero both come into play, to terrifying effect. The mandatory “versus the counterpart” fight in Tieri’s plot focuses not on Superman himself, as previous one-shots have focused on the Dark Knights’ primary counterpart, but on a fight with other heavy hitters, including but not limited to the Kryptonian-powered members of the Superman family. While the fight against some of those targets is only spoken of, not shown, earlier demonstrations of his anti-Kryptonian powers, coupled with their nightmarish applications and differences from the normal Doomsday, make up for that deficiency, and even enhance his menace by way of leaving the fight to readers’ imaginations.

The only major downside to this issue is the premise upon which the Devastator himself is built by the combined efforts of Tieri and Tynion. Other Dark Knights each had a concrete difference for Bruce Wayne (or in one case, Bryce Wayne). The Red Death wanted the Speed Force to save all of Gotham. The Dawnbreaker received a Green Lantern ring shortly after his parent’s death. The Murder Machine wanted to use technology to revive his father figure. The Drowned lost all trust in anyone after her lover died. The Merciless completely abandoned his internalized “rules.”

On the other hand, the Devastator, though ostensibly a version of Batman who gave up on the idea of hope, seems to be more a normal Batman who had to deal with an evil Superman. In essence, the difference is far more external than internal, and seems to be more based upon nightmares of Superman than Batman. By placing most of the blame on an external force, rather than his own flaws and mistakes, Tieri appears to remove a major part of why the Dark Knights are so horrific: they represent a normal Bruce Wayne gone horribly wrong, not a normal Bruce Wayne who lost his way because of someone else‘s evil. Perhaps it is a symptom of the focus being on Bruce Wayne’s fear that his friendships have made him weak, but that could have probably been shown better by having more friendships than just the one with Superman be tainted. This isn’t to say that the story is bad, just that it doesn’t fit quite as well with the others.

Where the plotting might fail, the artwork more than picks up the slack. Much like ‘The Death of Superman,’ there is a decidedly high focus on the sheer amount of destruction in a Superman vs. Doomsday fight, but the destruction seems to have begun even before the fight started. Tony S. Daniel’s wide-sweeping shots showcase broken buildings, cracked streets, corpses, and more, a battle of titans that shakes the literal foundations of Earth -1 as much as Earth 0 later down the line. The battle on Earth -1 is disturbing in its sheer brutality, from impalements to dismemberments to entire streets seemingly turned into landscapes not unlike the monster Doomsday itself. More than almost any other of the thus far seen “minus worlds” of the Dark Multiverse, this one seems hopelessly, irrevocably broken by the way Daniel draws it out. Even more than that, Daniel’s artistry creates the impression of a monster movie story, rather than a superhero one. Through the sweeping visuals of devastation, and the aftermath of the Devastator’s initial emergence, the fight takes on a distinctly inhuman bent in its scope.

Daniel’s depiction of Prime Earth fairs little better. Intense focus is given to faces, especially when they cannot be shown, such as a slowly infected Lois Lane-Kent as she returns home to her son. The uses of a hood to cover her face is eerily reminiscent of not only a multitude of villains, but also the cover of the first volume of “Superman: Earth One,” which takes place in none other than Earth 1, the opposing number to the Earth of the Devastator. The revelation of a corrupted Lois’ face is both scary and on some level a bit amusing, as it is similar to the classic “turn head to reveal undead face” common to the Resident Evil series and those who reference it, even further placing this story within a “day zero” viral apocalyptic tale.

Tomeu Morey’s use of color further enhances the story. The gory violence is made all the more potent by the sheer quantities of blood, particularly in the no-holds-barred battle on Earth -1. Furthermore, lighter, smooth human skin is integrated seamlessly with grey, rocky Doomsday flesh in the infected, giving a distinct impression of it being a disease, rather than some kind of possession or mask. The red glow of the completed Doomsdays’ eyes and the the semi-unnatural light green of Kryptonite both make for more concrete expressions of the invasive nature allowed by DC Comics’ aliens.

Though perhaps having a premise that doesn’t quite fit with the other Dark Knights’, “Batman: The Devastator” #1 remains a very interesting take on Batman vs. Superman stories, with some rather clever nods to other tales, such as a Kryptonite spear.

Final Verdict: 7.5 – Even with the slightly weaker premise in terms of an alternate Batman, the rise of the Devastator shines nonetheless thanks to fantastic artwork and a terrifying present day story.