Sam Kieth’s “The Maxx” was one of the more layered and interesting series to come out of 90s Image Comics. It was a great look at mental illness, psychological and existential issues, whilst maintaining a playful tone with Kieth’s art. Now, Kieth comes back for a crossover story with the reasonably straightly-played Batman. Question is, did this story that needed to be told, and does Kieth’s creation still work as well in this modern era? 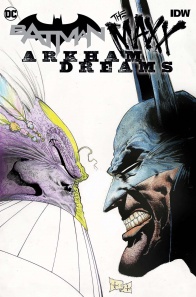 A devious new doctor at Arkham Asylum is conducting unconventional experiments into the human psyche, and he kicks off a chain reaction of disaster when he experiments on Arkham’s newest patient, The Maxx! The city of Gotham is starting to merge with The Maxx’s psychedelic mental landscape, known as the Outback, blurring the line between real and unreal. It’s up to Batman to save not just Gotham, but all of reality, and he and The Maxx are going to have to travel through some of the darkest places imaginable—the twisted minds of Batman’s greatest enemies!

Join Batman and The Maxx on an off-kilter and unforgettable romp through the diabolical consciousnesses of Batman’s greatest foes. Legendary artist Sam Kieth (Sandman, Wolverine) returns to his greatest creation, The Maxx, and returns to Gotham as well, assisted by multi-Eisner Award-winning writer John Layman (Detective, Chew)

One trope of crossover comics such as these that tend to grate me is the need to rationalize themselves, or rather, explain how they work within each other’s canon. Sam Kieth recognizes that this can be a bit of a slog, and tactfully brushes by this, making a solid political statement along the way. Batman is introduced to The Maxx here as the GCPD find themselves hassling the homeless, of which The Maxx happens to be a part of. It’s as simple a meeting as that: no need for any cross-dimensional encounters or pages of exposition, Kieth simply chooses to act as if they were across the road from each other all along. Along the same lines, Kieth does a good job at integrating the lore of “The Maxx”, especially the Outback into DC history. Kieth explains it simply in this context as the manifestations of the unconscious mind. This plays well with the backdrop of Arkham Asylum, where inmates are allegedly using it to wreak havoc in the real world. It’s a way to explore the landscape of “The Maxx”, yet while influenced by the rogues’ gallery of Batman, creating a seamless fusion of two worlds to create something wholly unique.

Kieth’s character work on both of these characters is highly unique, yet in tandem, they work well at playing the straight vs. silly man scenario. Kieth’s Batman seems to have a voice that’s less focused on being badass and coolly efficient, and more reminiscent of the Neil Adams, or even 90s Animated Series Batman. He’s Batman that’s operating more like a detective rather than an action hero, questioning everything, trying to build a logical explanation and always noticing the little details. Kieth, however, writes The Maxx as the perfect foil to all this. When discussing The Outback and the heavier lore of his original series, The Maxx is played as a flawed and almost tragic character. However, Kieth really has fun with some of his interactions with Batman. When Batman questions the fauna of The Outback, hilarity ensues. When this exchange occurs, “THERE’S CRABBITS.” “A CRABBIT?” “CROSS BETWEEN A CRAB AND A RABBIT.” “NATURALLY.”, we can’t help but chuckle as it seems perfectly in character for both of them. Similarly, when Batman calls out Maxx for repeatedly saying “FOR I AM THE MAXX”, it flows perfectly with the tone established. Kieth has a good handle on what makes these characters tick, and I’m excited to see how the relationship develops in subsequent issues.

Kieth is a master of the sparse, surreal and psychedelic in his artwork, and this issue showcases that terrifically. Kieth’s work isn’t trapped by constraints of realism, rather, his character work and general proportions seem to be constantly fluid and changing. It’s worth noting, however, that the work is the most grounded when the setting of the story is in the real world, in which Kieth enlists a style that looks absurdly realistic, especially with Batman’s often pouty lower lip, disparate stubble, and well-defined jawline. We start to tread from the beaten path once we’re deep in the Outback settings when Kieth himself looks to be having more fun rendering the two protagonists interacting with each other and the world around them. Batman will go from being ripplingly jacked up and three-dimensional looking in one panel, to looking flat and more graffiti-like in the next. The Maxx, too, looks more like a constantly shifting beast, with his features more bestial than his human form and his body seeming to flow further to the background the more pages we go through. It’s truly a psychedelic art style that becomes even weirder when looked at in progressive sequence.

A lot of the setting work is based on negative space, especially in the Outback. From the start, we get a good sense visually of what the Outback represents as Kieth contrasts what it should look like, and has looked like in the original series, as opposed to what it looks like now due to the inciting incidents of this series. Both visions of the area are quite empty, both representing different interpretations of emptiness: the former being peace, and the latter being desolation. It’s, unfortunately, the only grounding setting we get of the Outback in this issue, as Kieth chooses to focus more on the warping and sequential work of the characters within the Outback rather than the Outback itself. It feels like something of a missed opportunity and feels even more missed out when looking at the settings of Gotham and Arkham in the real world. There’s not a lot distinguishing these settings from any generic city space. Really, the main thing that makes it feel like Gotham is that Batman is present and that we later see a panel displaying “ARKHAM ASYLUM” before we get to the section aptly displaying Arkham Asylum. It would have been fun to see Kieth’s warped take on the gothic destination, but what is sacrificed is at least made up for in other aspects.

Color is handled by Ronda Pattison, and like in much of Kieth’s work, comes off as a washed out, often seething and arid palette. It works well to convey to readers a psychedelia not like the rainbow mushroom-induced colors that we usually associate with the word, but a more blinding and shoe-gaze style palette. There’s a lot of bright, hot colors, especially in the Outback, that is nicely offset by pale purples and navy blues. Pattison’s coloring has a very textured feel to it as well, giving it a raw feeling that works well with Kieth’s art. This is conveyed best in the sequence when Batman and The Maxx are discussing the denizens of the Outback, working great next to Kieth’s warped depictions of the character. Regardless, color still plays more of a backseat in this series, playing up the idea that mood is created by negative space, and Pattison’s restraint in certain areas like the black in Arkham Asylum or whites of the Outback convey this well.

Sam Kieth makes a triumphant return to his beloved creation whilst at the same time pairing him with one of the all-time comic greats in “Batman/The Maxx: Arkham Dreams” #1. The story works well at establishing a crossover and playing with elements of both characters, while the art remains as timeless and stylized as ever.