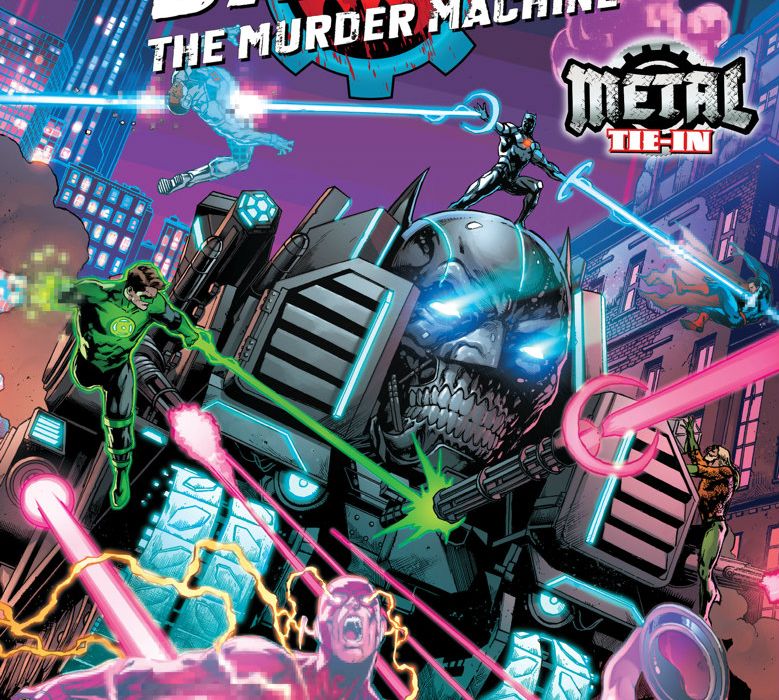 “Metal” has given us some serious spin off material with these Dark Knights one-shots. Now we’re looking at a Batman/Cyborg hybrid who appears as a tank on the cover of this issue. Need I really say more? 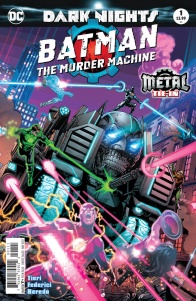 As the events of DARK NIGHTS: METAL rock the DC Universe, the creatures of the Dark Multiverse stand ready to invade our world! How can even the World’s Greatest Heroes stop a horde of deadly beings that appear to be powerful, nightmare versions of familiar figures? Find out in these special tie-in issues!

The idea of a Batman gone wrong is by no means a new one, but this exploration of the descent (for lack of a better term) is certainly interesting. Tieri and Tynion chart Batman’s turning to the dark via introduction of Cyborg’s tech – a great metaphor for rogue machine paranoia. This flashback/origin tale section is where the issue shines most, due to it being a well-paced tale. Every aspect of the flashback hits the right beats; with Batman obsessively rewatching footage of Alfred being attacked, Batman showing that he had a backup plan even for his butler, and the Alfred A.I. corrupting Batman’s good nature into that of a militant, super-active villain. It’s comic booking at its best, and Tieri and Tynion milk it for its worth.

It’s a shame then, how much the present tense sections lack in comparison to this origin tale. Each time we come back to the confrontation between this Batman and Cyborg, it’s essentially the same scene – Batman beating down on Cyborg, and slamming him with exposition about his Alfred relationship being a father/son allegory. This is the main problem with this section: Tieri and Tynion give Batman some serious dialogue real estate. Single panels have walls of text of Batman essentially recapping what happened already in the flashback sections, bringing the flow of the issue to a grinding halt in the one panel. It makes what should be a fun free-for-all between the two characters a real slog to get through, especially in one panel where Cyborg is knocked down, and Batman has about five, large speech bubbles all to himself in the one sequence.

Tieri and Tynion do a pretty good job on character work, mostly. The meat and bone of this issue is built around the idea that this Batman and Cyborg both have strong connections to their father figures that have shaped their lives in big ways. Cyborg’s drive is well conveyed through this idea. We see Cyborg conversing a lot with his worried father at the start of the issue about fighting the Dark Knights, and it gives a lot of weight to their relationship. Cyborg is fighting not only for the greater good, but also to protect his Dad and prove he’s a good hero. It’s clearly portrayed, and gives us some emotional tension to latch onto during the fight, especially during the vicious ending scene. The Batman/Alfred relationship is similarly made, but doesn’t make as much sense. We’re not shown what really drives this Batman to join the Dark Knights, most of that is off screen. Even the shift where the A.I. enters Batman’s mind feels really forced – one moment we’re feeling sorry for Bruce, then he instantly becomes a mindless killer thanks to a computer. Science!

Regardless of all this, the art team words hard to make this a real visual treat. Riccardo Federici has a great art style that feels reminiscent of other European comics like “Metabarons” and “The Incal”. It lends an interesting aesthetic to the already well-designed Dark Knights and Cyborg. Some of the splash pages and lesser-panelled pages look beautiful thanks to this. After the first flashback, Federici throws out a full pager of the Murder Machine Batman from the back – we get a lithe, powerful looking android figure, with incredible attention to detail in the joints and spinal section of the armour. The whole scene flows beautifully, with Batman’s mechanised limbs sizzling with energy and accentuating the focal points of the scene.

In terms of setting, I’m split down the middle between the flashbacks and present scenes ones again. Federici’s style seems to work well not only in a sci-fi context, but in the exaggerated gothic stylistics of Gotham City. From our first look into the past, Federici gives us a flowing, Victorian styled pencilling scene. Fists fly from the corners and the whole scene flows with a spiralling movement that feels like the cover to a gothic novel, and sets the scene really well tonally even if it doesn’t render the entire environment. Instead, we get all that we need – the cobblestone ground is slick with puddles, the panel borders sport jagged cavern spires, and limitless building sprawl in the background as the scenes unfold. Unfortunately, the Watchtower present scenes don’t feel as charming. For the most part, they’re generic lines and screens – again, Federici gives you enough to place you, but it doesn’t feel imaginative or creatively rendered.

Rain Beredo’s style suits the detailed pencilling of Federici’s art style well, which is something that doesn’t always work well. Although there’s a lot of contrast difference between the present and flashback scenes, most of the book features a washed, more muted palette. It all works well in the sci-fi context of Federici’s work – when the Murder Machine Batman stands above Cyborg’s fallen figure, Beredo has ominously glowing lines of energy run through his dark metal armour. But Beredo works best in the Victorian-esque flashbacks. The palette is incredible desaturated here to great affect – everything conveys the suitably melancholic feeling of the scene really well, from the dull colours of Batman’s rogues gallery popping off the greyed backgrounds of Gotham’s sewers. One particular scene of this setting that was especially interesting was when the A.I.s approach Bane – the majority of the scene is greyed, except for the brightened A.I.s that eerily stand out and enshroud Bane. Beredo shows she’s talented and versatile, excelling in each part of the book

The latest of the Dark Knight’s one-shots falls a little shakily in “The Murder Machine”. Tieri and Tynion create an interesting origin for the character, but one that doesn’t really justify his current position. Federici absolutely slays the book with his Eurpoean aesthetic and Beredo compliments this perfectly, giving this book a one-two punch of an art team. Check this out if you’re invested in the spin-off line already.

Final Score: 6.8 – Computers go rogue in this interesting yet strangely executed spin-off, with some seriously beautiful art to elevate the book just above average.