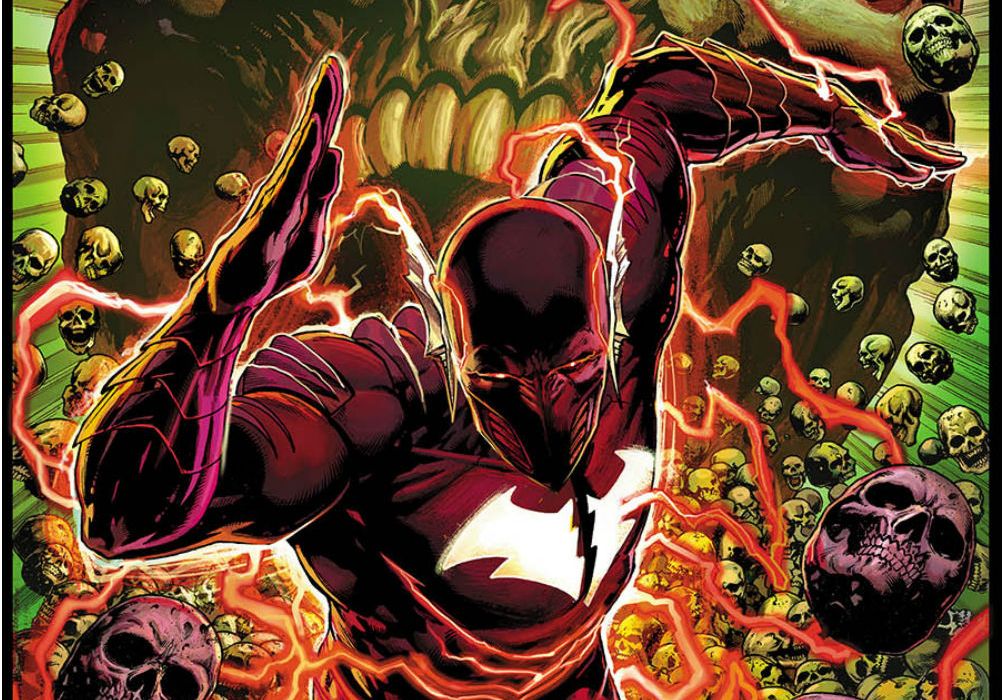 The Dark Knights have risen! After the huge centerpiece issue that unleashed The Dark Knights, it’s finally time for the first of the one-shots focusing on the evil heroes with “Batman: The Red Death” #1. Will the novelty of an evil Batman really propel an entire issue’s worth of content? Is the Dark Multiverse idea going to be too thin to really inspire a solid one-shot? Will Joshua Williamson be able to draw a straight line between the ongoing Flash title and this Batman one-shot melding the two properties? 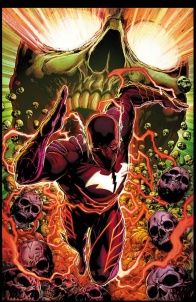 As the events of DARK NIGHTS: METAL rock the DC Universe, the creatures of the Dark Multiverse stand ready to invade our world! How can even the World’s Greatest Heroes stop a horde of deadly beings that appear to be powerful, nightmare versions of familiar figures? Find out in these special tie-in issues! Ready?

This comic book accomplished a lot in some 30 pages. Readers get an idea of just who this new Batman is and what exactly he stands for in the space of one issue. Writer Joshua Williamson was also able to give Bruce Wayne a strong reason to want the Speed Force to begin with. This comic is an origin story–giving readers a peek at life in an alternate Universe which ended up spawning the Red Death in the first place.

The title is centered around Bruce’s relationship with Barry Allen. This is a much different version of the two characters and with this title, I would have like to have gotten the chance to psychologically examine the struggle Bruce was going during the traumatic events leading him towards The Dark Knights. Allen’s journey in this book is particularly emotional as Williamson goes the extra mile to try and ground this comic in some sense of reality. Williamson starts the book at a wild place and then goes through the motions to try and sell readers on the status quo before driving the comic straight into utter chaos. With the personal nature of the story and the bond between Flash and Batman feeling so important to Rebirth, this title was able to achieve some ambitious goals that set it as a fascinating Elseworlds style narrative.

In a few more installments, these one-shots could feel repetitious, but this comic has a style all its own with the insane pencils of Carmine Di Giandomenico. Giandomenico had such a defined style that it took me a hard time to wrap my head around his pencils with the overall Flash comic book at the start of DC Rebirth. Seeing Giandomenico still tied to the character has created an awesome consistency which led me to entirely change my tune. The kinetic linework and fluid pencils and inks he contributes to this book are unrivaled in the comics industry today. In addition to awesome fight scenes which move very quickly, the splash pages and reveals bring some additional scope and grandiosity to the scripting here. Giandomenico goes wild when the Speed Force opens up and the Red Death emerges. The colors form Ivan Plascencia are bright, yet very ominous and alluring. There’s a marked difference between the alternate reality and main DCU in the coloring alone. This extra sense of clarity made it a lot easier to digest this comic book.

When Williamson peels back some of the layers in the literature and the Red Death starts making his way towards the DCU the story does get slightly confusing. The protagonist wanders into the main world with little explanation, making the last couple moments of the narrative seem underwhelming until we start to get a confrontation with DCU heroes and the character. This issue contains a fun surprise as well. I have no doubt will tie-in with some of the events from “Dark Nights: Metal” in future installments of the book.

Perhaps the most disappointing aspect of the issue is how much time is wasted in the script. Williamson spends three pages on exposition and ends the narrative in a lingering plot thread instead of paying off his heavy script with a more dramatic moment. While DC’s editorial may have wanted to save whatever the next big story moment for the Red Death is for “Dark Nights: Metal,” this book would have carried more weight if the title could have paid off some of the huge story beats and transition into the next book more smoothly. The book ends with a couple of caption boxes and a tease at the next issue of the crossover instead revealing something that would have driven readers directly into the next issue with no hesitation.

“Batman: The Red Death” #1 accomplishes a dark alternate future in broad strokes but it would have been great to see Williamson paint around the edges and flesh out this character further. This is an engrossing comic with great art, but there’s a tease at something great here with The Red Death that falls short. That being said, this is still a strong start to DC’s Dark Knights one-shots with solid writing and fantastic art.