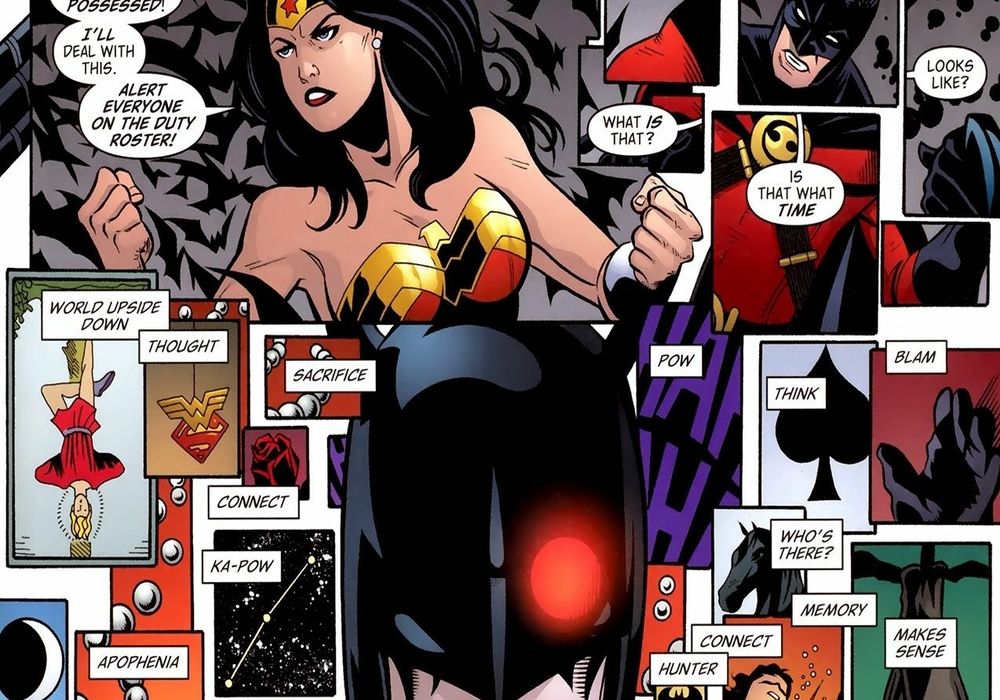 Batman’s ongoing crusade against crime took some very strange twists and turns during Grant Morrison’s epic seven year stint on the character. And though Morrison’s run revealed several startling and bizarre moments (from Batman removing his own teeth at Bat-Mite’s suggestion, to the possibility that Thomas Wayne had actually paid a hitman to murder Martha Wayne) perhaps nothing was more “out-there” than “Batman: The Return of Bruce Wayne” issue 6. This is the issue where Morrison pushes the idea of “Sci-fi Batman” to its breaking point and introduces some familiarly Morrison-esque elements of meta-narrative. This weekly Evergreen explores “Batman: The Return of Bruce Wayne” #6, Morrison’s sci-fi meditation on death, time travel and the end of the universe. 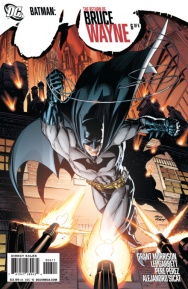 Written by Grant Morrison
Pencilled by Lee Garbett and Pere Pérez
Inked by Pere Pérez, Alejandro Sicat and Walden Wong
Colored by Guy Major
Lettered by Jared Fletcher
Writer Grant Morrison and artists Lee Garbett and Pere Perez deliver the final chapter of this time-spanning epic! With Bruce Wayne just steps away from returning to present day Gotham City, the timestream might have a few more surprises in store for The Dark Knight! This issue paves the way for Batman’s shocking future!

In a 2014 interview with Grant Morrison, fellow comics scribe Neil Gaiman explained what he loved about Morrison’s comics. As Gaiman noted, “your narratives were always meta-narratives, and they were always smarter than they needed to be.” That description definitely applies to “Batman: The Return of Bruce Wayne” #6, the final issue of Morrison’s “lost-in-time” Batman caper. Because this comic is “much smarter than it needs to be,” somehow tying a Batman time travel caper into the philosophical writings of French Jesuit Teilhard de Chardin, Frank Tipler’s theories on how to raise the dead and Hans Moravec’s writings on robotics and artificial intelligence. Of course it also features the Batman roster of characters, the Time Masters and the Justice League of America, but don’t let all that deceive you…this comic is an existentialist horror drama for the intellectual 1%.

The first four issues of “The Return of Bruce Wayne” are more or less standard superhero fare. The mini series had focused primarily on Batman being lost in time following the events of Morrison’s “Final Crisis” series (wherein Batman is seemingly killed by Darkseid’s Omega Beams). “The Return of Bruce Wayne” reveals that the Omega Beams did not actually kill Batman but instead hurtled him backwards through time, stranding him in the Late-Paleolithic Era. In each issue of the series, Batman continues to mysteriously jump through the timestream, moving ever closer to the present time with each “quantum leap”. Certainly not an original premise in itself, but as is usually case in Morrison’s writings, things start to get very complex. Specifically, Morrison begins to conflate the Jack Kirby New Gods mythology (including Darkseid’s Omega Beams and “the Omega Effect”) with the real world scientific and philosophical theory of the “Omega Point.”

Although vaguely defined in the comics, the Omega Effect seems to represent a destructive, entropic dark side to Source (a Jack Kirby creation which, according to many experts, was the basis for George Lucas’s concept of “The Force”). The Omega Effect is what gives Darkseid much of his power, including the Omega Beams that sent Batman spiraling through time.

Conversely, the Omega Point, as it applies to real world theoretical physics, is a possible mechanism for raising the dead. this mechanism is “activated” when our universe implodes in a violent white hot singularity at the end of time. The violent nature of this singlarity could facilitate an infinitely complex information simulation program in finite time (meaning that every person who has ever lived could be resurrected in virtual reality, along with all of their shared memories and experiences).

The robot “Archivists” that we see in “Return of Bruce Wayne” are described in various writings on the Omega Point (most notably The Physics of Immortality by Frank Tipler). Tipler, a math and physics professor at Tulane University notes that the human race will need to have made the transition to machine hybrid at this point, since bio-organisms will not be able to survive the extreme conditions at the end of history. Specifically Batman refers to these robots as “bush robots” (another nod to real world scientific theory since bush robots are hypothetical machines detailed in a NASA report by AI expert/ transhumanist Hans Moravec.

Obviously, these ideas of robot hybrids and intelligent machines are common currency in the world of superhero comics. But Morrison takes the ideas seriously, tying the fictional physics of the DC Universe into real world scientific observations (i.e. his writings involving the DC multiverse often include references to the theories of Andrei Linde and David Deutsch, two real life advocates for multiverse theory). Fans will also note that Morrison has expressed interest in extropic theories and Frank Tipler’s Omega Point in previous stories. In Morrison’s “JLA: Rock of Ages” storyline, Darkseid is seeking the “Philosophers Stone” which is described in the book as “an exact working model of the entire spacetime continuum…from Big Bang to Omega Point,” implying that the DC Universe will end in an Omega Point.

And this is where “The Return of Bruce Wayne” picks up- the final fleeting moments before the universe is destroyed. We see Batman and the robotic Archivists at the Vanishing Point (a kind of nebulous outpost at the end of history). The Archivists are preparing for the end, archiving every person who has ever lived and every event that has ever occurred. One of the Archivists announces that “everything approaches it’s ultimate condition here” before dropping a bullet (presumably the bullet that killed Bruce Wayne’s parents) into the Archive. At this point, in an attempt to deceive the Hyper-adapter (an entity which Darkseid sent to possess Batman and guide him through time), Batman merges with the Archivists, making him temporarily all-knowing and omniscience.

Batman merging with the bush robots seems to echo another one of Morrison’s favorite themes. The idea of man and machine merging to reach a transcendent state. You see this same concept in Morrison’s other “Final Crisis” tie-in “Superman Beyond.” In that series Superman transforms into a “thought robot” who has so transcended his surroundings, he begins to recognize that he is in a comic book. Similarly, “The Return of Bruce Wayne” shows Batman briefly slipping his hand out of the panel and towards the reader, inquiring “What is this? it’s like glass, but it’s warm…”

So once again we see a meta-narrative beginning to emerge. The chaotic avalanche of ideas in this sequence is Morrison at his best. I should also mention that the art in this sequence is very striking. Lee Garbett deftly reinterprets Jack Kirby’s style to portray Batman interacting with Metron and other members of the New Gods pantheon. The tag team of Lee Garbett and Pere Perez are perfectly suited for this type of sci-fi weirdness, effortlessly depicting everything from “hyperfauna” to bush robots with fractal tendrils. And Guy Major’s use of cold, drab colors helps to reinforce the disorienting and ethereal nature of the narrative.

The previously mentioned psychedelic sequence may also provide a glimpse into Morrison’s original plans for the DCU. According to rumors, Morrison originally planned to elevate the three main DCU stars (Superman, Batman and Wonder Woman) from hero status to God status, transforming them into the “New” New Gods. Obviously these plans were scrapped, but aspects of that potential storyline can be seen in the “transcendent” Batman-Robot hybrid that we see here, as well as the transcendent Superman-Robot hybrid depicted in “Superman Beyond.” It’s also noteworthy that in both books, the transcendent heroes have been fused with super villains. The transcendent Batman is composed of Batman, the Bush Robots and the evil Hyper-Adapter. The transcendent Superman is composed of Superman, a “Thought Robot” created by the Monitors and the evil Ultraman (note that both transcendent heroes have one red glowing eye…perhaps representing this element of evil). This continues a common trend in Morrison comics where the hero teams up with the super villain to defeat an even greater threat.

Ultimately, of course, Batman and the Justice League overcome the Hyper-Adapter, which is sealed in a time machine and sent back to “The Return of Bruce Wayne” # 1 (where he is killed by Vandal Savage, setting a whole sequence of events into motion). But all of this happens after our cast of characters have been transferred back to the 21st century, leaving the Vanishing Point and Archive plotline more or less unresolved. Early in the issue, Batman observes that the archive is “the entire history of the universe down to every microscopic detail. The most precious thing ever.” Which is why it’s strange that, before the universe ends, the bush robots apparently transfer the the Archive into a black hole. While this could just be a creative and poetic way for Morrison to revisit the concept of the black hole, it also seems to have parallels with the real world Omega Point Theory. Writing on the topic of the OPT, Andrew Hickey has noted that the Omega Point is a black hole stripped of it’s event horizon. And the entire point of Tipler’s Omega Point Theory is that the physical world world will pass away but the important part, the information and the algorithms that comprise reality, can be recreated in virtual space.

Surely this aspect of the Omega Point Theory appeals to Morrison, who has had a career spanning interest in simulated universes and virtual reality. From the simulated timelines in “Sebastian O” to the infant universe of Qwewq in “All-Star Superman,” Morrison has had a longstanding and perhaps even obsessive interest in the topic. Even Morrison’s interest in fictional characters becoming real (and vice versa) seems to be related to this concept (i.e. a simulated human being is a basically a “real person” who is being transformed into a fictional character).

At the end of the day, “Batman: the Return of Bruce Wayne” #6 is, to paraphrase Gaiman, “much smarter than it needs to be.” But not in a pretentious or self serving way. This comic is clearly about big picture topics that Morrison genuinely cares about. Fans of superhero silliness featuring testosterone laden leading men and scantily clad heroines may be turned off. But for those willing to invest some thought and patience into their reading experience, “Batman: The Return of Bruce Wayne” #6 comes highly, highly recommended.

Note: While writing this Evergreen Review I consulted several sources to get information on the Omega Point…including (but not limited to): The Head of State Blog https://andrewhickey.info/
Omega Point Theory/ Wikipedia https://en.wikipedia.org/wiki/Omega_Point Interview with Frank Tipler https://www.youtube.com/watch?v=kMkp1kZN5n4