Gotham City is under siege by terrorists, and Batman is determined to find their leader and end this nightmare. But when Boston Brand aka Deadman comes to town, he discovers a horrifying secret: the terrorists are led by an evil and brutal creature. Some Spoilers Ahead! 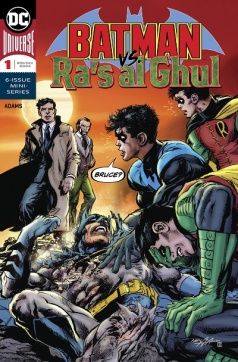 A monstrous villain known only as Khaos has taken Gotham City hostage. An inhuman monster armed with super strength, outlandish artillery, and an impressive force of devoted followers is causing incredible destruction and high casualties across the city. Batman rushes into battle to take down the terrorists and soon realizes the situation may be more than he can handle, even with some assistance from Deadman. When Ra’s al Ghul shows up amid the war torn streets, Batman knows his motives are anything but the helpful hand he is seeming to offer.

Neal Adams is somehow spinning this series out of DC Comics’s ‘Year of the Villain’ event while also seemingly throwing out modern continuity and jumps back in time to tell a story that picks up after the classic “Batman” arcs ‘Cataclysm’ and ‘No Man’s Land.’ While there have been some recent stabs at 80s and 90s Batman nostalgia with miniseries like ‘King of Fears,’ this new story actually seems to be taking us back within the canon rather than just stylistically time traveling. It’s an interesting exercise in storytelling and clearly Adams is returning to an era that he is most comfortable with. Unfortunately just because a creator is happy with the content he is putting out into the world, those taking in said content may not love the end result.

The issue starts with a wild moment of horror. It’s a small plot point that is used to open up the story by showing what a different place Gotham City is at this point and how different comic book stories were just a few short decades ago. I can’t imagine a “Batman” comic opening up with a frightened old man being strapped to his dog, who is in turn completely covered in explosives. It’s shocking and bizarre and it does feel like a story lifted from a bygone style of comic book.

The issue then moves forward to the meat of the story. Batman rushes into a fight with the terrorists, taking them down with the non-lethal methods he’s known for. When a specialized SWAT team comes in fighting and killing the terrorists, Batman takes on both sides of the fight subduing both villains and SWAT members alike. Batman and Deadman fight off Khaos, temporarily stopping him. At this point they begin to learn more about who or what Khaos is. After the fight, Ra’s al Ghul and Jim Gordon show up together with Ra’s promising his elite security forces to the GCPD as reinforcements against the villains. During the fight scenes we get old school heavy dialogue and extreme exposition from a news anchor giving a play by play of each moment. It is redundant, but Adams is leaning into the more text heavy storytelling that comics have more or less moved away from. The rest of the issue moves at breakneck speed giving us a lot more information about Khaos and the mysterious figure behind the attacks. The bulk of this issue is borderline nonsensical.

Adams throws a lot of insanity at the reader. It is a mixed narrative that while quite out there is still easy enough to follow. However, just because it is easy to follow, that does not mean we should. Like the hodge podge of plot, I had more than a few mixed feelings while reading this issue. Adams is banking on us falling line with the heavy dose of nostalgia he is feeding us and I’ll admit it worked, at first. I was pulled into his non-linear plot, and his distinctive art style. There are few long time “Batman” fans who wouldn’t immediately be romanced into picking this up just by glancing at it.

Between the writing and the artwork, Adams has put a lot on his own plate. If he had handed the artwork off, or at least the coloring duties to someone else, there is a good chance many of the pages would have been clearer. While there is a lot of charm and nostalgia in giving him full control over this book, there are also a lot of sloppy and weak moments that could have been worked out or fixed otherwise. Adams’s style has never been my favorite, I’ve always preferred my Dark Knight, a bit darker. I am definitely a fan of more modern styles when it comes to superheroes, but that said, I still love this work on some level. It takes me back to first reading various Batman titles as a kid.

There is no denying it: Neal Adams is a legend. He is a major force in the industry and things would not be the same without him. That being said, this is clearly an instance where someone should have told him “No” at some point between the line of “Yes’s” during the production of this book. Clunky and ill-timed dialogue fills this issue from cover to cover and while some pages resonate as a callback to a beloved era, a lot of it falls short of dynamic. Beyond falling flat, much of the artwork is just unclear with various planes overlapping without proper guidance. In short, his illustrations and color work look good on the surface, but it all falls apart under scrutiny. With a full creative team working with him, this book would have only been stronger allowing for ideas to blend. This just feels like a book full of ego at play with no real plan. This is far from the worst thing I have read recently and not the worst “Batman” book out there, but it just serves no real purpose.

This issue feels like a 10 pound story in a 5 pound bag. Just in these 23 pages there is a partially destroyed Gotham, terrorists, Khaos, Ra’s al Ghul, Deadman, two Robins, Nightwing, Jim Gordon, and Bruce Wayne(?) – who is a copy, a clone, a robot? Who cares?! He’s here, deal with it!

Final Verdict: 5.0, You will be intrigued by the plot it sets up, you will enjoy seeing a very 1980s Batman come up against bonkers situations and Ra’s al Ghul, but in the vast market of comics, you may want to ask yourself if this one is worth much once you take off those rose tinted glasses.