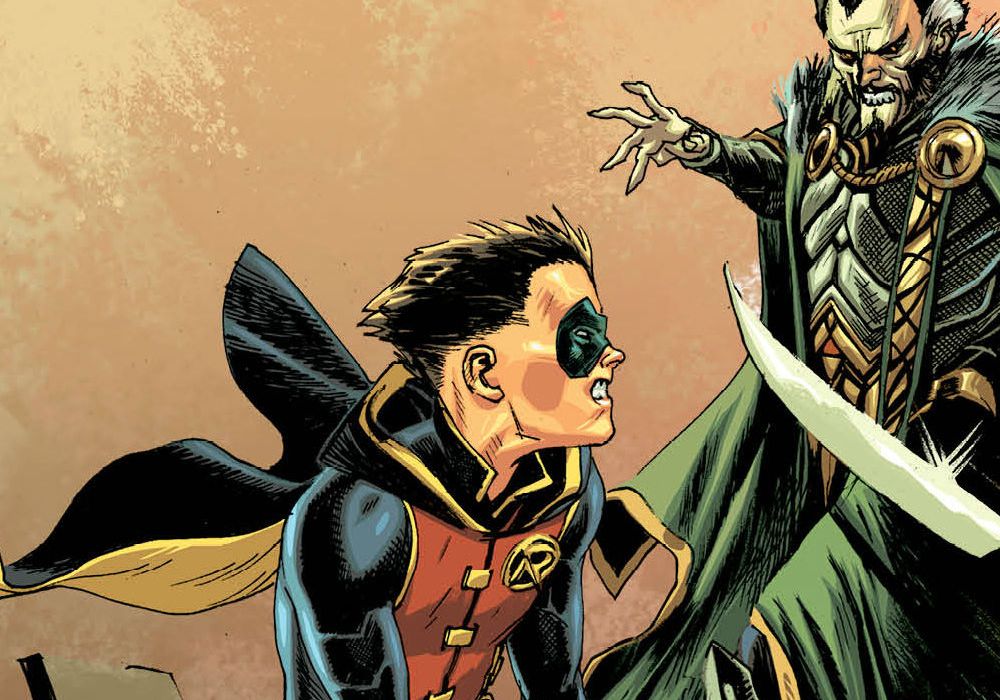 DC Comics latest status quo shift involving Batman includes a wedding with Catwoman. With the gears already in place for the said wedding, DC is currently capitalizing on the trend with a series of loosely related one-shots all written by Tim Seeley. While one-shots such as these have a track record varying in quality, the very sudden wedding of Bruce Wayne should definitely have an impact on his biological son Damian who is also serving as Robin. “Batman Prelude To The Wedding — Robin Vs Ra’s Al Ghul” #1 is here to analyze the relationship and see where Damian falls in a greater context outside of the core “Batman” title. 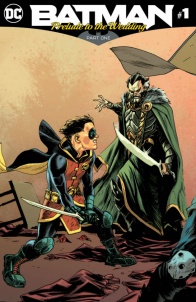 Ra’s al Ghul returns to have a heart-to-heart with his grandson, Damian. Once upon a time, Ra’s thought Bruce Wayne would be the heir apparent to his criminal empire, but now that Batman has turned his back on Talia for good, Ra’s wants to know if Damian Wayne will honor his mother by stepping into the family business at last.

For an ancillary tie-in comic, DC has assembled a strong creative team with artist Brad Walker and author Tim Seeley. Each member of the team does a solid job to contribute as much possible to the entry to make the title feel more meaningful. The opening sequence of the installment shows off so many aspects that make Damian’s character and role in the DC and Batman world unique. Damian is still young and cocky with his immaculate confidence. Seeley characterizes Damian’s cocky side while working very hard to not undermine his character development or make Damian feel bitter or angry. Seeley also takes the first steps in strongly defining Selina Kyle’s dynamic with Damian which marks a fascinating juxtaposition when compared to the Kent family.

After the turmoil Damian experienced in his youth, the character is in a much better emotional place. Seeley directly references the past and shows the aggression and sadness making up the first part of Damian’s life. The script is a great case study on the emotional state of Damian while revisiting old wounds and analyzing his reason for creation. Despite DC’s integration of different continuity in DC Rebirth, much of Grant Morrison’s work on the character including the creation of Damian is still intact. This installment is also not the first time the writer has explored Morrison’s Batman run with the previous ‘Nightwind Must Die’ story-arc set during his “Nightwing” run.

Mining older story avenues from Damian’s past in a way that strictly is not recapping what came before allows this script to achieve a high quality. With the extremely sudden proposal between Bruce and Selina, it is difficult to make the status quo feel earned. This issue is the first step in the right direction cementing the change and showing what a married Bruce Wayne would really mean for Damian. In the second-to-last scene in the comic, the book ventures towards dreary emotional material readers would not expect an ancillary tie-in story like this to evoke.

Walker’s art is wonderfully expressive in the one-shot. Readers can see some of the personality coming from Damian in some sequences just by looking at his face. When the action sequence starts to break up the structure of the story, Walker also does a sound job making the comic feel vicious and gritty. A scene with a couple punches feels particularly cringe-inducing and hard to look at in the way violence should. This sequence transitions back into the normal story with an interesting visual queue making sure the title flows well despite the high ambition in the script.

The final more casual and domestic moments also capture the physicality of Selina well while showing off Damian’s hostile expressions in his body language. Walker does a phenomenal job mixing these elements and deserves a spot among the top pencilers working at DC thanks to his talent. The issue also features solid work from fan-favorite DC artist Otto Schmidt. Schmidt’s dark last couple pages nicely bridge to the next one-shot and provide a creepy outlook despite his beautiful, water-color style artwork, I have never seen Schmidt’s art in a context like this and am delighted with his versatility.

For a tale that should be a minor drop in the bucket, Seeley, Walker, and Schmidt do a wonderful job making sure everything within “Batman Prelude To The Wedding: Robin Vs Ra’s Al Ghul” #1 is interesting. The story does expediently covers Damian’s past while letting new readers get to know him. Housing the content of the story with an epilogue briding towards the next one-shot is another fantastic idea that will make readers want to come back for more.

When it comes to larger themes and huge status quo shifts, comics so rarely have a chance to explore the ideas with any sort of complexity–thankfully, the Damian and Selina relationship is given the slightest bit of development before we see Bruce and Selina walk down the aisle. The issue feels so integral to the Batman run that it would have worked well in the main title which is also shipping at a fast pace. If you are even the slightest bit invested in Damian Wayne this one-shot should not be missed.

Final Verdict: 8.0 – “Batman Prelude To The Wedding: Robin Vs Ra’s Al Ghul” #1 adds the context for the Selina and Damian relationship missing from the “Batman” ongoing series.