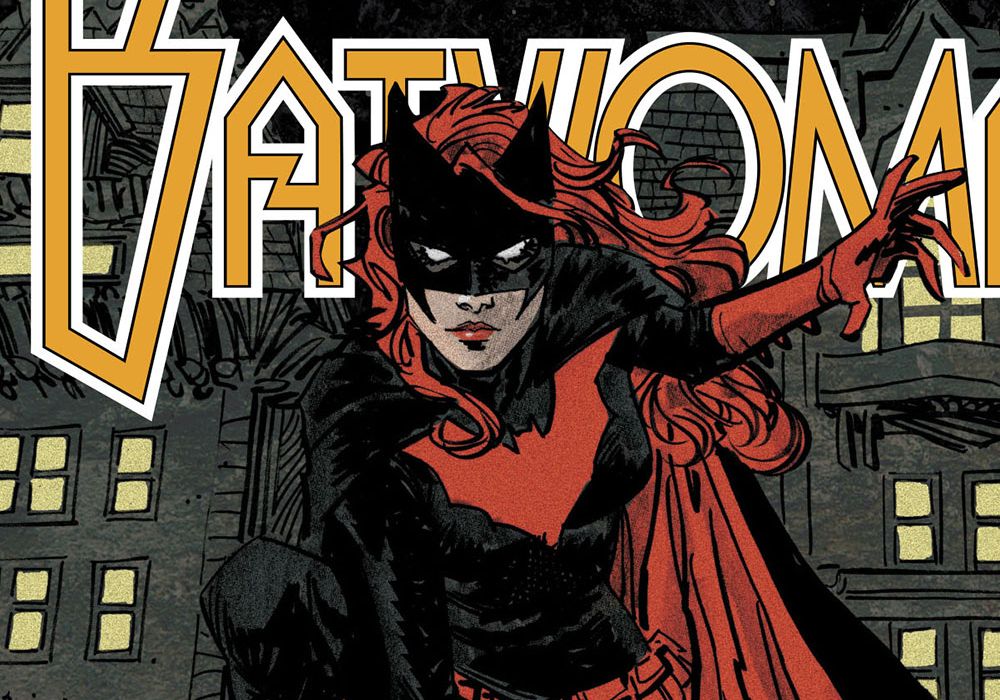 Alice is back and this time she’s brought bats. . . just not the good kind like you like. 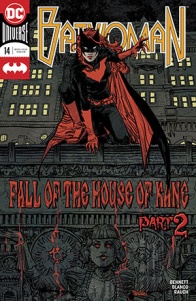 ‘The Fall of the House of Kane’ part two! Vengeance and madness come home to Gotham City! The Many Arms of Death have descended upon the city, bringing a plague that will devour everything Batwoman holds dear-and Alice, Kate’s long-lost sister, leads the way!

Like Bruce Wayne, Kate Kane’s life has been shaped by tragedy, but instead of a singular event in Crime Alley, Batwoman’s past demons simply will not leave her alone. Whether it’s her father, a past lover, or her twin sister, someone close to her always seems to make the simple life of crime fighting even more difficult. ‘The Fall of the House of Kane’ storyline seems to be no different, and issue 14 picks up where the previous issue left off with Kane trying to locate her sister who has mysteriously and conveniently gone missing from a sanitarium in Geneva. What follows is a sequence of events that leads to a cataclysmic unleashing of biological-toxin infected bats in Gotham. The metaphor is not subtle.

Illustrator Fernando Blanco does not have JH Williams III’s flair for mind-blowing page design but he does carry on the tradition established by Williams and subsequent Batwoman artists in presenting Marguerite Bennet’s story in a style somewhat removed from the cape and cowl depictions in the other Bat-family books. Some of this springs from the costume which has the distinction of remaining largely unaltered in Batwoman’s modern era. The large red bat symbol, the flowing red locks, the sheen on the black body suit and cowl, and the knee-length red cape, gauntlets, boots and belt are character design perfection, and creators have done well not to try to fix what isn’t broken. Artists seem to be inspired by the Gothic costume design and Blanco’s art here is no different. The sensibility bleeds into the every panel of the issue, creating a storytelling landscape that mashes up the cinematic sensibilities of William Friedkin, Ridley Scott, and Dario Argento.

While the previous issue in this story arc was more successful in translating the eerie supernatural dread that seems to follow Kate Kane, Batwoman returns to Gotham in this issue to find her adopted city being slowly enveloped in red skies. Despite the old sailor’s adage, no delight can come from this. The only pages where Franco’s art seems to falter are the depiction of the rooftop fight with Tahani (another character with whom Kane shares a past . . . also, does everybody have an airship in this series?). There are some head scratching sequentials here, and the pages largely lack dynamism and urgency. But this is a minor quibble, as the sequence is bookended by the baddie confrontation we all really paid to see: Kate confronts her sister Beth, better known to her super villain buddies as Alice. The giant red hologram is a great touch, and the instrument of Gotham’s destruction, while telegraphed, is a fun reveal that lets Blanco stretch his page design legs a bit more. John Rauch’s coloring gives Blanco’s linework a Francesco Francavilla feel that is certainly not unwelcome, cementing the horror-tinged tone of this Batwoman story.

Bennet’s script carries on the other tradition of Batwoman’s solo adventures by forcing her to come face to face with her past in the present. While it’s familiar ground, Bennet avoids rehashing childhood memories via flashbacks where a single family photo will do. The Many Arms of Death’s plot is pure overwrought (albeit very fun) comic book villainy, but the only point that really defangs the story is the contrivance that puts Alice completely under the influence of a drug that reverts her to her criminal instincts. Without Tahani to administer the drug regularly, the reader is left to wonder if Beth’s criminal tendencies are just short-lived. And what happened to Tahani anyway? Did she actually get soldered to the exit ramp hydraulics? Either way, it looks like she won’t be wielding a syringe anytime soon. So the central contrivance makes Beth a pawn, a figurehead used to dole out karmic justice in the form of Alice to her sister. Bennet may have some tricks up her sleeve for the remainder of the arc, but for now this neuters the central conflict somewhat.

The arc’s title does intimate that this is big doings for Kate and her sister while evoking a master Gothic storyteller. While things did not end well for Edgar Allan Poe’s Usher siblings, one can assume that Kate will make it out of this alive, and The Many Arms of Death’s threat will be neutralized. We can also guess that the influence of the drug that Alice finds herself under may unleash a more permanent condition that undoes her rehabilitation. Future plot points aside, one hopes that this arc can find a way to move the Batwoman character beyond the typical beats of her standalone stories and allow her put some of these demons to bed. That would make for a refreshingly new direction for the character.

Final verdict: 7.0 – “Batwoman” #14 is a good-looking book with a super villain plot that is pure comic book ridiculousness, which is not to say that it’s not enjoyable, especially if it helps jettison some of the ghosts that haunt our hero.