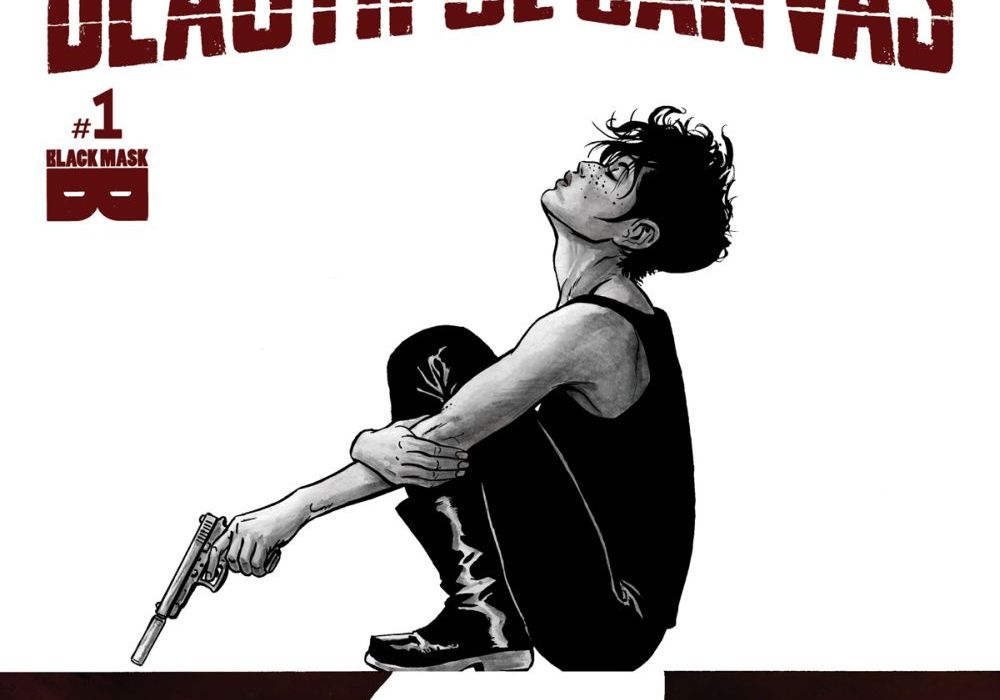 Black Mask have been killing it with their indie releases lately, delivering hard hitters like “Space Riders” and “4 Kids Walk Into A Bank”. Their latest release, “Beautiful Canvas”, brings a conflicted female protagonist amidst a strange and wonderful world. Will it be the next big indie hit? 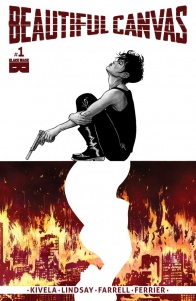 Lon Eisley is a hitwoman. While dealing with the shock of discovering her girlfriend is pregnant, Lon gets hired for a new assignment: to kill a small child.

In a bold declaration of uncertainty, she saves the boy and hits the road, despite the fact her boss clearly wanted him dead for a reason.

This warped crime dystopia delves into the emotional dichotomy of creator/destroyer as Lon tries to connect the two very different worlds she now inhabits.

Ryan K Lindsay opens with a deliberately surreal beginning, throwing the reader off guard from the get go. The first page shows our protagonist Lon standing next to a dead body, who leans over to her and says ‘You’re overthinking it’. You’ll have to get used to this type of erratic, almost rhizomatic storytelling as it continues for pretty much the whole issue. Fortunately, it makes for a thoroughly original read. Each incident, each bullet shot seems to incite a memory or a scene change. When Lon talks to the son of a woman she killed, she flashes back to a bullet-riddled young girl asking why she does bad things. It’s uncompromising storytelling that refuses to hold your hand, and it’s so very rewarding.

Each scene is executed with Tarantino-level precision. Characters are despicable and psychotic, yet loveable in their antics. Early on, the woman that Lon kills (Julie) is chopping carrots, and decided to snort a line of cocaine midway atop one of said carrots. My personal favorite, however, has the antagonist of the issue severing her victim’s limbs, putting them in garden pots and ‘watering’ them with blood. All this is written without any cynicism or tongue-in-cheek. Lindsay wants you to know that the people in his story aren’t perfect, and takes that to the logical extreme – and then some. Funnily enough, the most normal character of the story is Lon, the protagonist and hitwoman. She’s seen boxing during the first few pages, talking to her lover Asia, and being generally baffled by the events occurring around her. It’s a great contrast to the bizarre characters all around her, and she served as a great grounding point for readers to easily follow.

What I find interesting is how layered the world of “Beautiful Canvas” becomes as the story goes on. There are no words used for exposition or to introduce new elements, yet new elements are constantly popping up. Lindsay takes readers by surprise by writing this like a typical crime story, yet throws in elements like Lon being haunted by a child she seemingly killed. Further down the line, we’re introduced to the concept of super-powered beings, not like the Justice League but closer to the Suicide Squad or the Doom Patrol. Lindsay doesn’t mention any inciting incidents that caused superpowers, or mention any tragic backstories. It’s a highly original take that can be a little confusing at times, but is ultimately rewarding to dedicated readers.

My only problem with the script is essentially what I think is its greatest quality too. Having new elements appear so often without context can be jarring, and was to me on my first read. Normally this wouldn’t be a huge problem, however since this a first issue it can throw readers off a series that they may not be completely sold on enough to reread. I know I struggled to understand if the supergroup were super-powered or another shocking gag like the limb-growing woman. However, like any good piece of literature, the more time you invest in it, the more it gives back to you.

Sami Kivela delivers tasteful, sleek modern art that fits the issue’s tone perfectly. The first page, which may very well be the single best page in the issue, is a great example of the blend of normal and strange that is yet to occur in the book, and Kivela blends the two elements like they were simply meant to be. Kivela includes telling details in the background of the room – things that indicate a normal, modern household like small plants by the window, a bottle of vodka, star-patterned cushions and a desktop computer. Yet, at the focal point of the page, a body lies dead, with blood splattering from a bullet wound to the eye. Lon herself sits on the couch next to him, looking just as astounded as you, the reader, are at this visceral scene. It’s a perfect opener, giving readers the low down on what to expect from this book.

Kivela draws refreshingly normal looking humans, like David Aja’s style if you read his seminal “Hawkeye” run a few years back. Lon displays a wide variety of emotions as she reacts to all the strange events during the issue. A scene occurs in which she talks to her lover Asia on the phone, and a panel depicting each person sit opposite each other. Each panel can only show one emotion, but are drawn with subtle detailing that make them feel more real than they are. The way Kivela draws Lon looking down her shoulder, the way her eyes look away in doubt, and her just-ajar mouth are more telling about her emotional state talking to Asia than the words themselves are. Contrasting to this, it’s almost funny how Kivela draws the bad guys with the fashion and looks of models and super-stars. Milla, the limb-gardening psychopath, is a slender blonde clad in makeup and a bold red dress. It’s a reversal of roles that makes the portrayal of these characters so engaging.

Kivela’s sequential action is great when established. A sense of movement is always established when necessary, so that the flow of the comic is easy to follow. Right from the start, Kivela guides the reader’s eye around a boxing ring with multiple camera angles as Lon moves around it. It’s a small touch here, not noticeable only because it makes the reading too smooth to make it obvious. The first scene in which Kivela’s talent is immediately obvious is during the shootout with Julie, in which reading time is slowed down to having three seconds play out over three panels. Each big panel is intersected by smaller close-ups of each sudden movement – the carrot flinging, the gun firing, the collision of objects – it’s so wonderfully constructed that you can’t help but stop to take it all in.

Triona Farrell lends a distinctive, neon/dayglo style to the comic with her coloring. I know I’ve already gushed about the first page a lot, but her vibrant palette makes the scene so set in its tone. Farrell uses a dynamic gradient of orange and purples to highlight that yes, this is not an ordinary scene, and furthermore contrasts that with a psychedelic, pink blood splatter on the wall. It gives the comic a palpable sense of cool which is so important right from the get-go. Farrell works well with the other settings throughout the issue. When Lon and the child are driving through the suburbs, Farrell uses softer, pastel colors almost to imply innocence. On the opposite spectrum, the diner Lon calls Asia in is a dark palette of black and blues. Farrell is a big part of maing this book work, and is great at letting her presence be felt.

“Beautiful Canvas” is a wonderfully complex debut issue. You may not be sold on it on your first read, but you won’t be able to help but think about it afterwards. Questions will nag at you, making you want to read it over and over to fully grasp what it has to offer. It’s not the most welcoming comic book, but it is one of the most rewarding debuts you’ll read this week.

Final Verdict: 8.8 – A complex, layered first issue, “Beautiful Canvas” will have you scouring it’s beautifully drawn pages over and over.