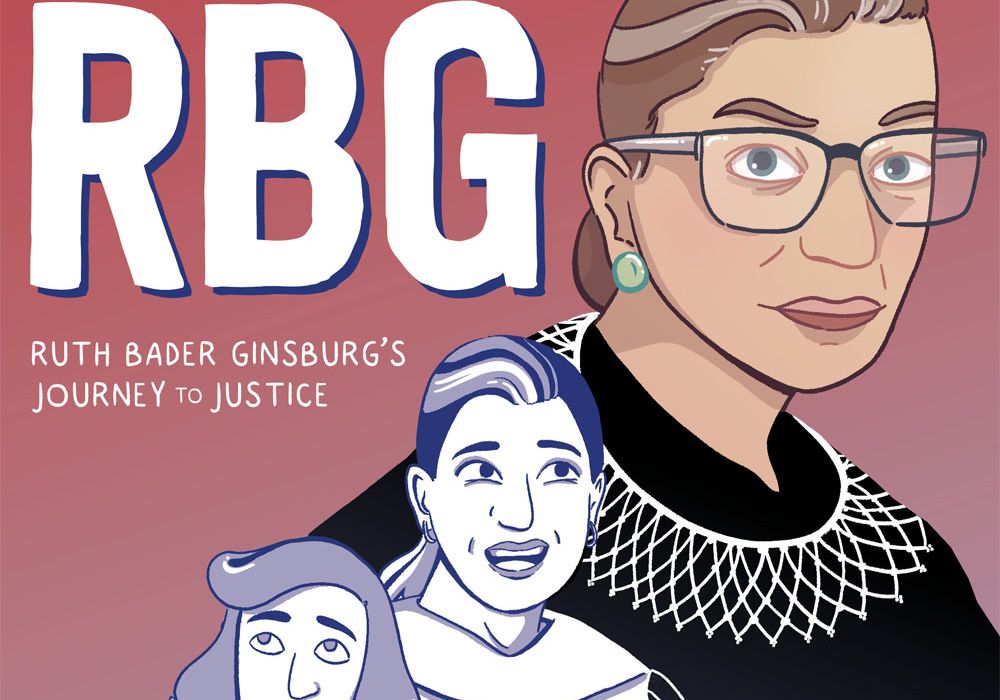 After the death of Ruth Bader Ginsburg, the associate justice of the US Supreme Court on Friday, it seemed like a good idea to read Simon & Schuster Books for Young Readers’ graphic novel to learn more about her life and accomplishments. Written by Debbie Levy with art by Whitney Gardner, the book was only published last year, and seems to have become an unintended obituary, although the focus is on her life before her appointment to the Supreme Court in 1993. 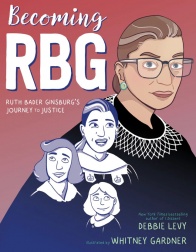 Supreme Court justice Ruth Bader Ginsburg is a modern feminist icon—a leader in the fight for equal treatment of girls and women in society and the workplace. She blazed trails to the peaks of the male-centric worlds of education and law, where women had rarely risen before.

Ruth Bader Ginsburg has often said that true and lasting change in society and law is accomplished slowly, one step at a time. This is how she has evolved, too. Step by step, the shy little girl became a child who questioned unfairness, who became a student who persisted despite obstacles, who became an advocate who resisted injustice, who became a judge who revered the rule of law, who became… RBG.

“Becoming RBG: Ruth Bader Ginsburg’s Journey to Justice” is first and foremost an educational graphic novel: it’s effectively a large storybook, where Levy is giving the reader an extended summary of Ginsburg’s life, while comical asides and Gardner’s friendly artwork prevent it from becoming too dry or downbeat. The most memorable example comes after the death of Ginsburg’s mother, when she imagines her ghost reminding her to be calm in the face of injustice: it sounds odd in text, but it helps make the gloomy chapter go down more easily.

I learned much about Ginsburg from reading this, from her childhood nickname being “Kiki” (as in “kicky,” not “Ki-ki”), to her love of opera, and the startling fact her mother and her husband were diagnosed with cancer almost back-to-back. It was also striking reading about how bigoted the States could be, even when she was growing up: there’s the ridiculous sight of a teacher forcing Kiki to write with her right hand, even though she was left handed, and the sheer, unbridled anti-Semitism she would witness.

We’re so used to thinking of anti-Semitism as the problem in Europe at the time, and anti-Black segregation as the issue in the US, it’s thought-provoking. The book also gives a profound insight into how unusual it was for a woman to enter the world of law in the ’50s, and how hostile an environment it was as a result: did you know bathrooms for different genders were separated across campuses, or that some libraries did not allow women? It makes you wonder how we ever romanticized this time period, and sad about what hasn’t changed.

Levy and Gardner deserve a lot of credit for not papering over or sugar coating these issues, even if there’s an incredulousness that helps carry an optimistic tone — characters are often shown expressing what we’re thinking about when it comes to the ridiculous roadblocks Ginsburg encountered during her life. What they don’t do is ask the reader to consider whether some of these problems (namely balancing work and raising children, being overlooked by male employers, and the gender pay gap) persist today: the creative team may have felt it would’ve seemed like talking down to their target audience, but it’s easy for a lot of children (and adults) to assume that because society has improved, all of these injustices have gone away.

Gardner’s artwork is rendered almost entirely in shades of pale violet, with the occasional use of red violet to emphasize certain events and documents. The monochromatic color scheme and simple outlines evoke the black-and-white photography of most of Ginsburg’s life, as well as school book doodles, bridging the gap between reader and subject. The lettering similarly feels aimed at the young audience, as its use of lowercase letters makes it seem like a fellow student’s book report.

The book does become a bit wearying to read towards the end, due to the sheer amount of legal information being conveyed, as Ginsburg’s life stabilizes and her work becomes less personal — nothing better reflects that this is a book for a younger reader than the sheer amount of text, which they’ll easily find more time to sit down and absorb. While I criticized “Tiananmen 1989: Our Shattered Hopes” for being a stuffed overview of historical events, this book isn’t trying to be something more than a fun, point-by-point account of Ginsburg’s journey to the Supreme Court.

All in all, “Becoming RBG” is a lovely and eye-opening tribute to a groundbreaking woman: it’ll make you wonder what a truly great graphic novel (or series of novels) about her life would be like, but for now, this is a suitable paean to Ginsburg, and her strive to get to a place where she could protect vulnerable people. Hopefully, through this book, she will continue to inspire kids to take up the cause of legal justice, and wistful adults, who may be feeling despondent over how far we still have to go to achieve true equality, to carry on her good work.