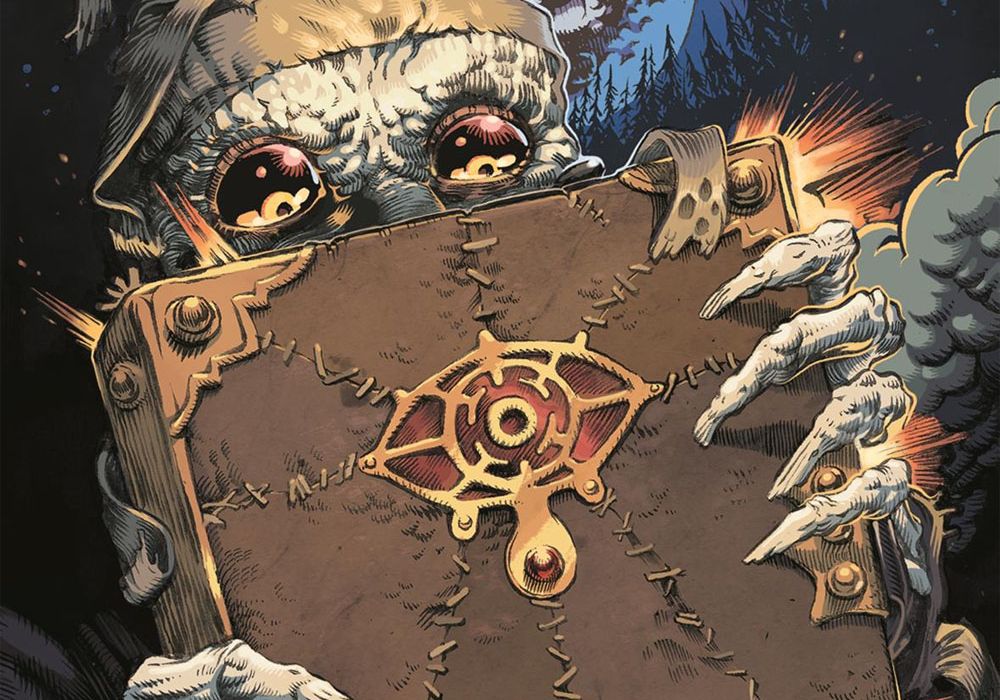 Horror tales that are rooted in small town legends are equally scary and charming. Dark Horse regularly embraces these qualities in many of their publications. “Bedtime Games” is their most recent folktale horror book. 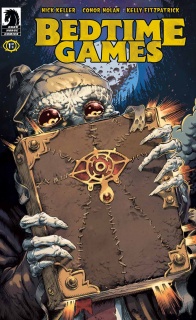 “Bedtime Games” opens up on the last day of summer for three best friends about to start their senior year of high school. They are good kids, but get into mischief just as any of us did in our youth. Although they all live in the same small town, they have distinct backgrounds. However, darkness in their lives may be what kindled their friendship in the first place. They attend the same private school with a hefty tuition, they have varied aspirations for college and adulthood and they each carry their own personal, tragic burden from the recent past.

There is an old foot bridge in town that has been closed off for over twenty years – ever since a kid fell to their death. This, of course, intrigues the teens to explore it and to learn of a secret door that leads to a tunnel, that in turn leads to the academy they attend. Their plan is to acquire a key to the door and make their way through the tunnel to find out exactly why the adults in town are so adamant about keeping it locked off. Unbeknownst to them, a malevolent force awaits their entry.

Our three protagonists are everyday teens. Keller writes them in a way that is relatable and realistic. Arguably one of the most important and necessary elements to any horror or fantasy story. Once the supernatural comes a-knockin’, you need that anchor. Avery is a strong willed girl. Intelligent and genuine. She is also one of the few people of color in this small town. A fact that does not seem to bother her, but is something that her aunt and guardian does not let her forget. Nor the fact that Avery’s father was Caucasian and did not stick around. There are darker aspects to her life and while she does not let that define who she is, it does have a profound effect on her. Jamie is the tough guy of the group. He is more of a daredevil and the first one to get into trouble if he feels the reward of fun and excitement out-weights the cost of reprimand. He’s the first one to show up with beer or jump off a cliff. He means well, but can be a little over bearing on his friends, especially the nervous and somewhat cowardly Owen. Owen is mostly willing to go along with his friends’s antics, but is more concerned about getting into a good college and staying out of trouble. He also has his own heartbreaking story line going on at home.

This comic immediately brought back memories of a few other great horror series. There are pieces of Tales from the Darkside, “Locke and Key,” even some “Hellboy” shorts stories. The story is well done and stands on its own, but feels safely at home with these properties, which in turn are partial homages to other horror monuments. The horror aspect is just creepy enough to keep interest. The tragic human element is what will keep you turning the page. While the balance in the upcoming issues will most likely shift more heavily to the supernatural, Keller will hopefully stick to all the strengths he has here and not rely too heavily on what lurks in the dark.

Conor Nolan’s (“Hellraiser”) art has a unique softness to it. It looks like he molded everything out of clay and if you were able to reach through the panels you could fall right into it. His illustrations allow your eye to move to exactly what he wants you focused on. He moves from heavy black lines, blocking out and defining specific characters and environments, to blending elements together to keep your eye moving. Kelly Fitzpatrick’s (“Archie, DC’s “Bombshells United”) colors make this a reality. Nolan’s technique could never be fully realized without it. It ebbs and flows with his drawings to become whole. Her use of bright, full colors and dark shadows give the book a timeless look. She brings a “Tales from the Crypt”/”Vault of Horror” look with a modern awareness. Working as its own thing while again calling back to the past of horror comics.

The first issue of Nick Keller’s four part mini-series is a great example of how to introduce us to a new world, with believable characters and its own rules, in a well paced manner. It pulls us right in and, truthfully, lays a lot of info on us, but it is never over-bearing or tedious. The narrative flows in just the right way. It’s not going to change the world of horror comics, but it will keep you looking forward to what’s next for the series.

Final Verdict: 7.0 – A good start to this horror-fantasy with heart, if not a little too reminiscent of other stories.