Finally making its American debut, Rubin and Garcia’s iteration of “Beowulf” makes its way to a new audience, with less Angelina Jolie than you may remember but a lot more Grendel dick. And that’s the only humor you’ll get out of me for the next 1000 or so words. 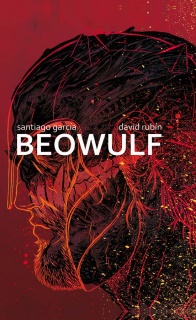 SANTIAGO GARCÍA and DAVID RUBÍN unite to bring forward the myth of Beowulf, which has endured for a thousand years and inspired an epic poem of the same name, became a foundational piece of English literature, and inspired generations of authors, from Tolkien to a good number of Hollywood screenwriters. BEOWULF tells of the tale of a Scandinavian hero in lands that would become what is now Denmark and Sweden: A monster, Grendel, has arrived in the kingdom of the Danes, devouring its men and women for 12 years until Beowulf arrives to save them. GARCÍA and RUBÍN faithfully follow the original story for a new version that is neither revisionist nor postmodern, but captures the tone and important details of the poem, translating its potent, epic resonance and melancholy into a contemporary comic that isn’t standard swords and sorcery or heroic fantasy fare, but rather an ancient story with a modern perspective that remains respectful of the source material.

Many readers by now are familiar with the Olde English poem “Beowulf” by an unknown author. Set in Scandinavia, the poem tells the tale of the warrior Beowulf, who travels to Heorot to slay a monster known to the locals as Grendel. This in turn causes the wrath of Grendel’s mother to be unleashed, and Beowulf’s double victory soon finds him elevated to the role of King. With his trials not complete but time passing, Beowulf finds himself at the mercy of both one last monstrous foe and time itself. The poem stands as one of the most long-lasting forms of early entertainment, a popularized myth that is continuously elevated not just from how it’s told but how it’s interpreted — an element intrinsic to re-telling the tale from its original West Saxon dialect.

So as we look at this book, the latest in a string of interpretations of the tale, the question then becomes: what is most important here? Is it the story and the continued legacy, or is it how the story is told?

Let’s look at the first part. All things considered, there is nothing new in Rubin and Garcia’s “Beowulf.” It is the story of “Beowulf” as you remember it without too much variance; at least, none that I particularly noticed (though its been a while since I read the poem last, I’ll admit). All the main points are there, from Beowulf’s arrival and battle with the monsters through to his ultimate demise. Minor inflections are made to enhance the story, but nothing that deviates too far from the original plot. Garcia remains faithful to the narrative and his interpretation of the dialect does a smooth job of matching inflection of the poem; while not as intriguing in the language and certainly leaning more heavily into the violent nature of the tale, there is a somewhat lyrical quality to the book that allows us to remember from whence this interpretation came.

Garcia also allows Rubin to do most of the heavy lifting in the book, which is fairly apropos to the medium. Rubin remains as playful as ever, his penmanship on the page bringing to life in clever and inventive ways the century-old tale. Rubin’s interpretation of Grendel and his mother are rather creative, odd, horrifying and weird; the scales and teeth are everywhere, everything at edge, and all of it truly unreal. Beowulf himself fits with Rubin’s general tendencies for male heroes, both in terms of muscularity and prowess, and in that way a connective tissue seems apparent between this book and others Rubin has done (particularly “The Hero”, which I’ll get to in a bit). But Rubin also fills the world with eerie settings and desolate landscapes, drenched in blood and hounded by crows, and in that he’s truly able to set an icy, Nordic tone to the book to bring forth some of the tale’s true natures.

Rubin’s work in “Beowulf” is reminiscent of other colossal works in sequential storytelling where a story has been adapted cross-medium and succeeds in different ways. I’m reminded, oddly enough, of Aronofsky’s “Noah”: something that was fairly dull in its cinematic form, and yet was tremendously beautiful in its graphic novel form by Niko Henrichon. Both “Beowulf” and “Noah” lean on opportunities that are intrinsic to the comic medium, as the panel-to-panel decompression alongside acutely illustrated and sometimes surprising amounts of detail are what truly sell this book, if nothing else. It’s something that visual storytelling mediums have come across before; this is certainly not the first, nor the last, that a familiar story will be presented by a lush and rich vision. It just so happens that in comic books, that’s exactly the way to sell your story.

One thing that particularly impacts “Beowulf,” however, is “The Hero”, also by Rubin. Originally released in Span back in 2011/2012, a year before “Beowulf’s” original release in 2013, “The Hero” similarly features Rubin’s trademark inventiveness for storytelling by bringing new life to an old story — but what “Beowulf” lacks that “The Hero” had in its reimagining of classic storytelling was an essence of creativity. “The Hero” is a true reimagining of the story of Hercules, mixing and match the classic with the modern for a new techno-vision that isn’t afraid to use an established outline to play around in a different world; “Beowulf” is more tame, essentially just telling the epic poem in a new medium. “Beowulf” has been translated quite a few times: as novels and short stories, comics, graphic novels, films; this is really no different from a simple story perspective than any other iteration you’ve seen before. If you’ve somehow never read “Beowulf” or if you’re really into the poem then having another iteration of it is probably worthwhile; if this is old hat, though, then Garcia and Rubin’s interpretation ostensibly remains so.

Rather, the point of this comic simply seems to be an exploration of storytelling’s evolution. The final pages inherently confirm so (let alone the enclosed essays), but the value that Rubin and Garcia’s “Beowulf” seeks to bring to the table is its inventive and playful storytelling techniques. From its multi-panel cross-fading to sleek and intensely illustrated double-page spreads of chaos incarnate, Rubin uses the space of the book to explore opportunities in both micro and macro storytelling. This also allows for in-depth explorations of time, both isolating solitary moments for further reflection by the reader while also intensifying big moments a la what Quitely intended to do with “We3.” While not trying to do anything new with the story, the book adds to “Beowulf” by expanding the narrative visually.

In that respect, “Beowulf’s” place in your collection serves more as an art book than anything else. An addition to the classic poem if not a novel new presentation of the work, Rubin and Garcia’s bloody and violent interpretation of the story is a beautifully illustrated, if not overly inventive, presentation.

Final Verdict: 7.0 – Nothing new, but still something to behold