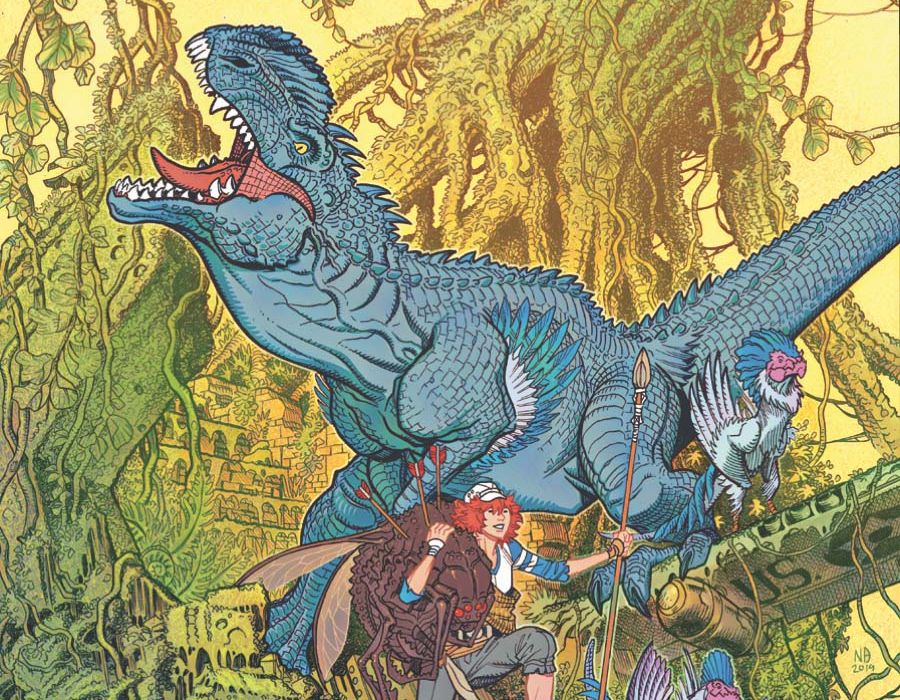 I am a sucker for a solid wilderness survival story. Stories like Daniel Defoe’s “Robinson Crusoe” or Gary Paulsen’s “Hatchet” have a special place on my bookshelf and in my reading rotation. I guess it’s something about the characters struggling against the elements and isolation with nothing more than their wits and ingenuity is a fantasy that I really like to read about, although I have no intention of willingly going out into the wilderness and trying to survive unless I really have to.

From the looks of the cover, “Bermuda” #1 seems to have taken the survival genre and added some fantasy and action twists to it. Let’s see if it’s any good. 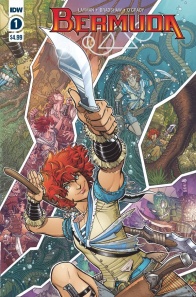 There’s a region in the Atlantic Ocean where planes disappear, ships are lost, and traveling souls go missing… never to be heard from again. And there’s an island within this place, mysterious and uncharted, untouched by time and civilization, where all who are lost end up-human or other! Bermuda lives here. She’s 16, scrappy, and living on this insane and wondrous jungle island-fighting at every turn to survive-is the only life she has ever known. She can handle the dinosaurs, the pirates, the crazed soldiers, dark magicians, and strange monsters. But the weird new kid who washes ashore just may be the biggest challenge Bermuda has ever faced-as he drags her along on a perilous rescue mission she wants no part of… and he’s likely to be the death of both of them!

Right off the bat, “Bermuda” #1 opens with a private jet carrying Bobbi and Andi–the children of a very rich man named Elliott–being struck by lightning and crash landing on a desert island in the middle of the Atlantic Ocean. When Bobby wakes up he is greeted by a 16 year old girl named Bermuda who manages to take Bobby under her wing and introduce her to her companion Dr. Hito Nakamura.

If Bobby is going to survive, he’s going to have to listen and learn from Bermuda and Dr. Nakamura very quickly, because this is no ordinary island. It’s a place out of time, filled with the flotsam of hundreds of wrecks, giant dinosaurs and lizards, pirates, aliens, and a strange race of merpeople that have kidnaped Andi and killed the children’s last connection to the outside world.

“Bermuda” #1 is written and lettered by John Layman, a long time comic book creator who is most famous for his fantastic cannibal police comedy “Chew”. Fortunately for parents everywhere, “Bermuda” #1 is much more kid friendly and outside of a few moments of blood and death, it’s a book that is a great read for younger audiences. Since Layman is a seasoned comic book veteran, his talents as a storyteller and comic book writer are on full display and the script is practically a clinic on pacing and how to immediately grab the reader’s attention. The story has a natural and comfortable flow that doesn’t waste a lot of time with unnecessary exposition. The characters and their relationships with each other are quickly established, there’s plenty of appropriate short term and long term stakes, and nobody acts out of character or does anything too stupid.

Special praise goes to Layman’s interplay between characters of Bobby and Bermuda. Bobby is a pampered rich kid who isn’t too much of a spoiled brat, but understandably has no survival skills and is justifiably overwhelmed by it all. Meanwhile, Bermuda is a highly capable survivalist who knows exactly what to do on the island, but although she has a burning desire to learn more about the outside world, she has a severely limited understanding of how it works. It will be very interesting to see how these two characters grow and what direction Layman decides to take their relationship.

“Bermuda” #1 is such a well written story that talking about its flaws is almost unnecessary, but there are a few small hiccups that will be mentioned for posterity’s sake and personal desire. There’s a bit of text at the beginning of the story that explains the setting and who the title character is that feels very unnecessary. The book does a great job of explaining who everyone is naturally, although the text is probably there for younger readers or parents who don’t know a lot about comic books but might want to buy it for their kids. Also, there’s an epilogue at the end that shows the father of the stranded children and reveals a much larger conspiracy surrounding the island and its properties that involves the United States military. It’s understandable why the epilogue exists and how it plays into the larger story; I just wanted to see more of the island and spend more time with the children.

Although the writing is very good in “Bermuda” #1, the real star of the show is Nick Bradshaw’s artwork and Len O’Grady’s colors. Bradshaw has a lot of experience working with the Big Two on all sorts of books, which puts him in the perfect headspace for delivering a work of fantasy for pre teen and early teenage comic book readers. Bradshaw has a very modern comic art style that looks realistic for the most part, with just the barest hints of manga influence and exaggerated cartoon features on the characters to avoid the uncanny valley. But it seems most of his efforts have been placed on the background and setting of the book, which shows the readers an island with a thick, incredibly detailed jungle and humans who have managed to cobble a home together from all sorts of flotsam and jetsam. The beauty of the jungle is greatly enhanced by Len O’Grady’s colors, which elevate the highly detailed art to stratospherically beautiful vistas of bright and luscious swaths of rich greens, blues, and yellows. This is a face meltingly gorgeous book, every panel is a treat to look at, and outside a few panels where the character’s eyes and poses might look a bit off it is incredibly difficult to find anything wrong with the artwork.

“Bermuda” #1 is a showcase of just how good and beautiful comics can be, and what happens when people who are really good at what they do are allowed to let their imagination run wild and create something that promises to be fantastic.