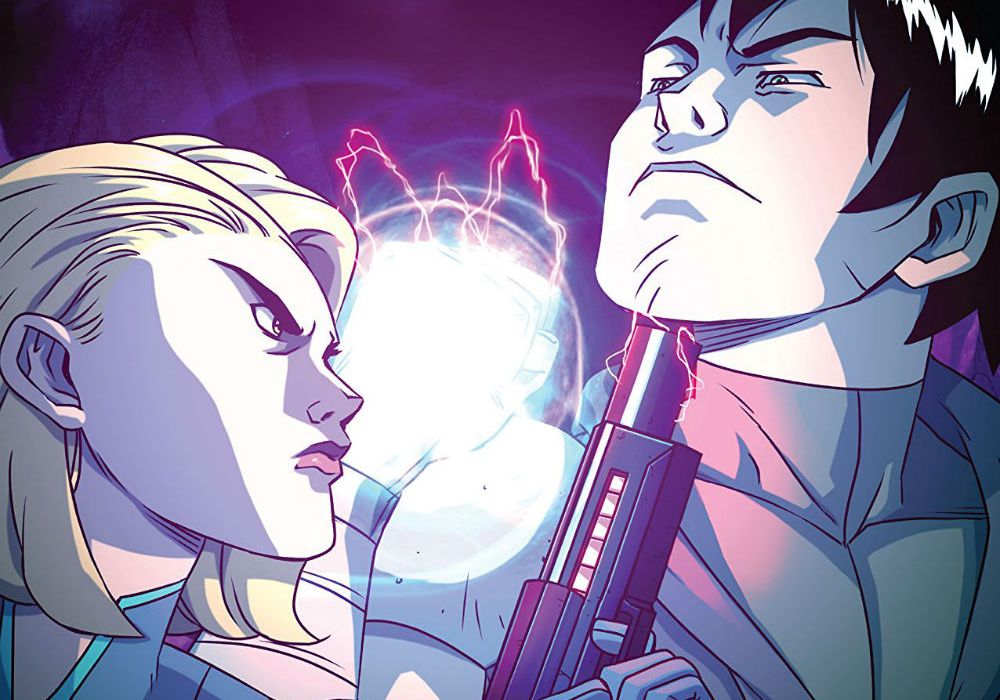 A pair of orphans, Kieron and Tamara, are about to turn 18. Unbeknownst to them, they are heirs to a pair of warring factions from other dimensions and they must either be married or kill each other. In “Betrothed” #1 Sean Lewis and Steve Uy try to create a story that is equal parts “Saga” and “Archie,” with a heavy dash of Romeo and Juliet in there as well. Do they succeed in marrying these disparate influences, or does the story end up being a bit of a jumble? The answer, and some spoilers follow. 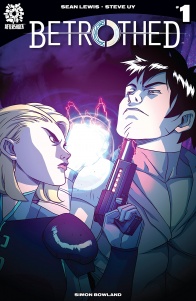 Welcome to the World of Betrothed! Kieron and Tamara are both seniors at the same high school. They’ve never paid much attention to each other, even though they are the only kids at school who are orphans. On the eve of their eighteenth birthdays, they discover a lifelong secret: in a dimension far away, they are each the leader of an army that is at war with one another…and what’s more, when they turn eighteen, they’re to be Betrothed or Fight to the Death!

From writer Sean Lewis (The Few) and artist Steve Uy (Uncanny X-Men, Avengers Initiative, Grumpy Cat) comes a sci-fi series, with a fun mix of Archie and Saga, that HAD to be told at AfterShock!

The solicit for “Betrothed” #1 says that the story will be “Archie” meets “Saga,” but I don’t think anyone imagined it would be as direct a mash up as this first issue makes it out to be. The two factions presented in this first issue are almost directly ripped from the pages of “Saga.” One, a side that uses magic and swords, the other guns and science. The only thing missing are the wings and the horns. There has to be some kind of line between inspiration and outright theft and I think “Betrothed” #1 crosses it.

What’s too bad is that at this point, “Betrothed” #1 doesn’t have any of the subtlety of “Saga.” If you’re going to steal from the best, you should steal all the stuff that makes it really good, not just the shiniest bits. Whereas “Saga” was a comic that took some inspiration from Romeo and Juliet, “Betrothed” #1 will not stop banging you over the head with how similar it is to Shakespeare’s play. There is a boy, there is a girl, they come from warring factions, but they are madly in love. The two main characters keep referring to themselves as either Romeo and Juliet, at first as a way of denying any similarities, but eventually embracing that fact.

Part of the reason it’s hard to distinguish between these characters from their influences is Kieron and Tamara are pretty thinly sketched characters in this first issue. The first few pages are spent on their meet cute, which involves a punch to the face, but the rest of it is just a generic call to destiny.

It’s too bad that the story isn’t more compelling, because the art by Steven Uy is well done. It’s a kind of cartoony, very clean, and lightly influenced by manga; it works well for the story. The art is at home in both the parts of the issue where it needs to look like a high school slice of life drama, and the parts where magical peoples are fighting advanced technological hit squads.

Uy is handling all the visual aspects of the book, besides the lettering, but it is the coloring where his work really shines. There are a few moments, a full page spread about half way through the book and a sequence toward the end, where the colors just really pop in the book. The full page involves people coming through a waterfall, there is this use of light blues and whites that create this brilliant effect of a shining, magic water fall that these people are jumping through. The colors work to differentiate between the different modes of the book.

When the main characters are in their normal, every day lives at the beginning of the book, the coloring is very simple, bright and warm as one would expect in a school. But when it moves into the more supernatural aspects of the book, Uy changes his palette toward darker colors, with the occasional brilliant blue. He does a good job of tying the scenes where the character’s families are fighting each other, and where Keiron and Tamara start to move toward their destiny’s by using similar palettes, so that they look similar even though they take place in very different locations.

“Betrothed” #1 is a frustrating issue. Uy’s art is well done, but the story in the book gets too bogged down in allusions and similarities to its influences that it doesn’t have enough time to make a story that is interesting in its own right. By the end of the story, it seems like the story has finally gotten to a place where it will do something a bit more original, but it takes the entire first issue to get there. While it is able to name check things like “Saga” or Romeo and Juliet, the series is missing the depth that those works have, and interesting coloring choices aren’t able to fix that. “Betrothed” as a series might just be very slow to get off the ground, and the issue leaves the reader in a place where the next issue can pick up on the action a bit more quickly. But in this first issue, “Betrothed” is still missing much of what makes its influences so interesting.

Final Verdict: 5.0 – “Betrothed” #1 ends up a jumble of influences, never managing to rise to the example set by the stories it is influenced by.