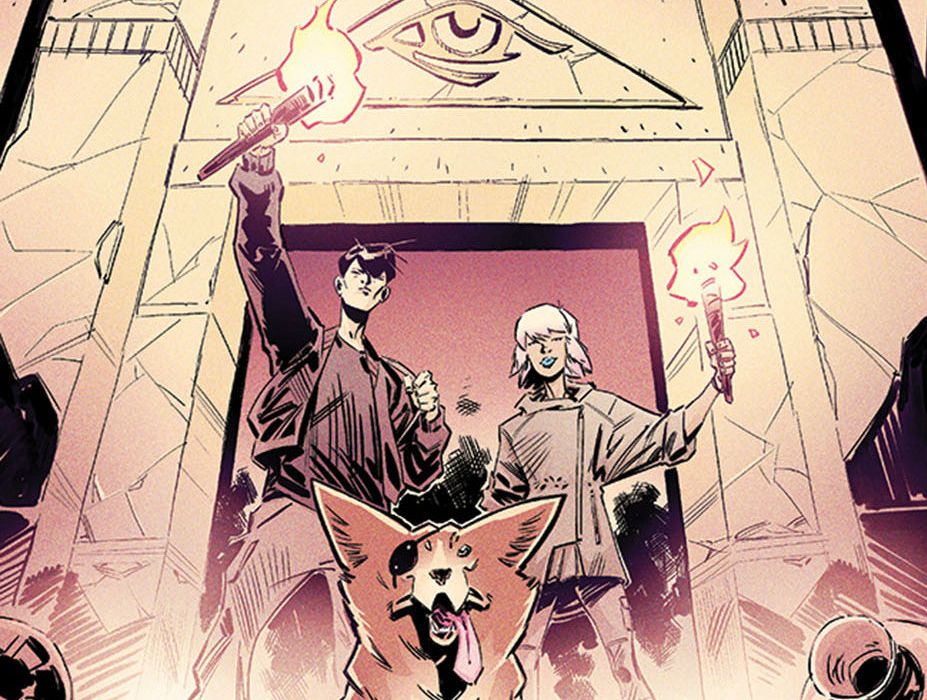 The latest Aftershock title revolves heavily around the idea of the connected conspiracy theories of an ego-centric teen coming to life. But does Paul Jenkins and Wesley St. Claire’s pitch work, or is the one-eyed Welsh Corgi the only true draw of this comic? 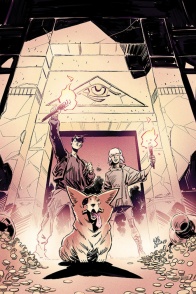 A young boy obsessed with crop circles and cryptography finds his boring life turned upside-down when he discovers that all of his conspiracy theories are true, sending him on the ultimate treasure hunt for an ancient secret spanning thousands of years. What is the connection between a lost mountaineer, an indecipherable manuscript, and the ancient library of Alexandria? How is this connected to a one-eyed, flatulent Welsh Corgi and endless plates of corned beef sandwiches? Find out in…BEYONDERS!

Jenkins has structured and set up a pretty solid concept throughout this debut issue of conspiracy theories. The part that struck me straight away was the obvious research done into making a book of this caliber. The first page talks about all the different historical concepts and ideas that the protagonist Jake has connected together. This could have very easily been facts that were falsified or fabricated by Jenkins. Upon further Google researching the topics, it was interesting and super satisfying that these were all actual historical people and events that I could explore beyond the comic, something which added a layer of realism and believability to the story. It also gave a lot of credibility to Jake as a narrator and protagonist, as it showed us that these were valid theories and that he has more to give us than just being a snotty teen brat.

Which brings me to my main problem with the issue. For such a central character, Jake doesn’t come off as the most likable person. You get a sense of it through his rather self-impressed tone throughout the narration in the first two pages, especially when he describes himself as “ONE OF THE WORLD’S FOREMOST AUTHORITIES ON THIS STUFF”. It doesn’t help that in the next two pages, he’s a bit of a tool and unnecessarily mean to his Uncle, regardless of the nature of their relationship and identities. Having Jake request “KELP IN PEANUT SAUCE” for dinner doesn’t make him interesting or thoughtful, but more like a privileged, upper-class kid who’s been spoiled his entire life. However, Jenkins does give him a lot of reasons to be bitter throughout the plot. Having the principal berate him for his imagination and attitude seems unnecessarily rough, especially considering that Jake still managed to ace all the school tests given to him. It works even better considering the ending of the comic and does give a little justification for Jake’s bratty demeanor.

No one could look at this comic and not say that Wesley St. Claire isn’t a hard-working artist. The aesthetic of his work is perfectly in tune with what Jenkins is going for with the script. St. Claire’s use of rougher, almost scribbled linework gives the feel of an explorer’s journal or an encyclopedia sketch of a landmark. This is especially true of the first few pages, where St. Claire goes through rendering an entirely new scenario panel to panel. Like I said, St. Claire shows his dedication to the work by rendering different characters and settings in immediate sequence with each other, and the sketchy style makes it feel like we’re looking at snapshots of old photos or sketches of these scenes. It works even better when this actually seems to be the case when we get a similar sequence halfway through the script. St. Claire’s style gives a worn and older feel to the photographs of the explorers when the panels go through them, really feeling like a historical montage/flashback from a movie or TV show. It’s a clever paneling and penciling technique that evokes feelings that are already pre-set within an audience for this type of story from TV and other mediums.

I love St. Claire’s environmental and setting work throughout this issue. There’s a simplicity to the rendering of them that makes them feel distinctly different from photographs, yet they don’t look wholly cartoonish or unrealistic, either. The first picture showing George Mallory exploring Mount Everest has the camera positioned like a wide ranged movie shot, and there’s a great sense of the depth of field within the small panel, yet shading and inking is heavy and very traditional comic style, almost like a stylized photograph. But even outside this first set of various different environments, the modern day sequences prove to be just as stunning. The fact that Jake lives in a cliffside apartment in an area constantly storming is ripe with potential, and St. Claire draws the heck out of it. From the first time we see the outside of it, St. Claire is playing with the lighting, showing us the single source of illumination coming from Jake’s room (a possible subtle storytelling device showing how Jake knew the truth all along). But then we get a beautiful bird’s eye coastal shot of the house, showing the lush setting of the area but also showing Jake’s isolation from the rest of the community. It’s great environmental work not only for aesthetics, but to serve a story purpose.

St. Claire also handles coloring in this issue, providing an almost faded, yet warm just-before-dusk palette to the story. The first page is a big catalyst for these ideas. I particularly enjoy the page depicting Piri Reis as it has a soft inner glow to it that emanates a sense of discovery and pride. But then I love that this is almost reversed when we get to Jake’s room, with St. Claire giving the room more of a colder, obsessionist light to the more pastel wallpapers of the room. I do like the appropriate use of sepia style coloring in the flashbacks and photographs because it feels authentic and transitions pretty seamlessly from the more pastel palette of the rest of the issue. I do, however, feel that the palette feels a little too faded and aged in scenes like the reveal of the true nature of Jake’s Aunt and Uncle. It looks a lot like old, acidic paper where the once-vibrant colors have started to fade, and comes across like that a little in the scene.

Paul Jenkins and Wesley St. Claire have created a debut issue that’s just as fun researching the in-story facts well after you’ve put down the comic. The setting is well executed, and the artwork is sketchy and tonally perfect. There are a few problems with the likability of the protagonist and some coloring issues, however, this still feels like a solid and well-constructed debut that I’ll be following, if not just to see more interconnected conspiracy theories.