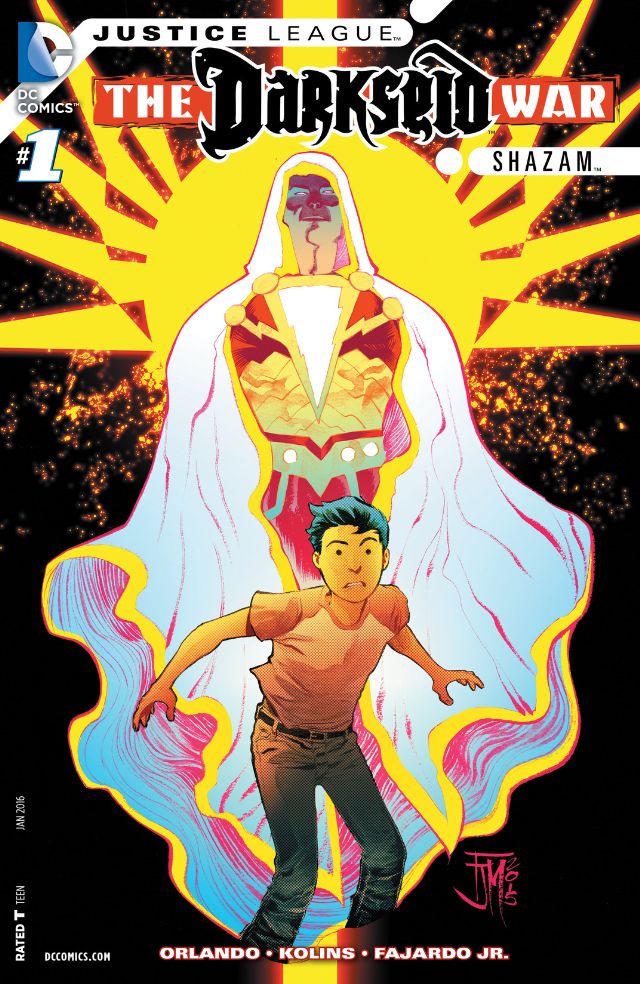 The God of All Evil has fallen and with his death does creation itself tremor. As many of the members of Justice League are affected by Darkseid’s death, so too is the World’s Mightiest Mortal. But how? And how will this impact Billy Batson’s future? 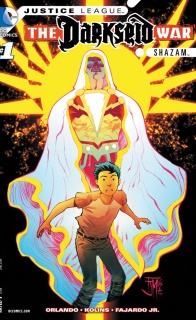 A boy becomes an army of Gods! No longer does Billy Batson have access to the powers of the Old Gods. Now, he commands the combined might of Highfather, Mantis and other New Gods. But these Gods are not passive. And they will sooner destroy Billy than give up control of their power.

As I mentioned in Comics Should Be Cheap this week: Why doesn’t Shazam have an ongoing? His New 52 origin, one of the most critically acclaimed stories of the reboot, was told in the back-up to one of DC’s best selling books. You would have figured that, with all the potential that story created, there would have been a “Shazam #1” ready to go when it ended. But no. Such a lack of foresight would be like if Kill Comics. Eat Comics. Absorb Their Power.

I say this because, like the Shazam origin story, Steve Orlando, Scott Kolins and colorist Romulo Fajardo Jr. have created something with Billy that is so ripe with potential. The story centers on how exactly Billy gains his powers from the variety of deities and what happens when a cosmic event like Deicide does to that. In this regards: Darkseid’s death causes the powers that Billy receives from those of Hercules and Zeus and Solomon and so on to “glitch” so to speak and a whole bunch of new gods take up the space. And it’s not just about the new gifts these gods give Billy, but how they work in connection to him.

Like Johns, I have to praise Orlando’s work on Billy. There was some controversy when Billy wasn’t the “Golly Gee Whiz” kid, despite the fact that he is, you know, still a good person and that the point is that one chooses to do good and such. This Billy is brash without being reckless (well, not completely) and doesn’t suffer fools. And yes, he does have a snarky side to him but it’s never to the point of abrasiveness. He is also not afraid to show a bit of fear at the beginning considering the massive change he’s going through. It’s natural considering the insane situation he’s in.

Something else I have to give praise to Orlando for: Dude went insanely eclectic with the gods he chose to be Billy’s new patrons. The solicit for this issue was kind of misleading to think that the gods would solely be Kirby creations (Although, considering the “Mantis” I was thinking of, I thought Billy was going to gain the power of showing up in better “Guardians of the Galaxy” books than the current one) but the gods we do get all have interesting appearances. We have Anapel, a goddess of kindness from Siberian folklore, Ate the Greek goddess of impulse and goes into the realms of beyond the Earth with the Ma’aleca’andra (Martian) God of Fire, Art and Death, H’ronmeer and S’ivaa, a New God, the Dancer of Destruction. But the two big surprises are the return of Mamaragan, the Aboriginal God of Lightning who is also known as The Wizard who gave Billy his connection to the gods as well as the god Zonuz who goes by a very different name, but to say would be a massive spoiler.

And Orlando makes a massive point here. A problem that Shazam has had going through his long history is sometimes the boy gets lost within all the fantastic of the Mighty Mortal. And that the Wizard chose Billy, not because Billy believed in the Wizard, but because the Wizard believed in him and that it is his choices that matter, not the whims of Gods.

Kolins and Fajardo were amazing in this issue. Each of the designs for these new patron gods is unique and fitting (examples of such as the russian folklore inspirations in Anapel, the fire and brimstone of H’ronmeer and the terrifying armor of the spoiler character. But it is Shazam’s “God of Gods” costume (originally designed by Francis Manapul) where the two sing the most. Bright and vibrant with its subtle homages to Jack Kirby but still very much in line with the 75+ year old hero.

And then let’s talk about their action sequences. Most people know Kolins from his tenure with Geoff Johns on “The Flash” and the big thing Kolins succeeds at is motion and there’s a load of it here, but you know on a god-scale as Shazam fights his opponent. Kolins and Fajardo also make great use of the gutter spaces -the spaces between panels- filling them with Kirby Dots and other allusions to the New Gods, as if creation itself is shaking from the fight. And the final page of this issue is one of such triumph and a load of wonder, both for Billy and the reader.

And that really is it: Unlike the other one-shots, this feels more like a pilot. A really really good pilot with a load of potential. So, I have to look at DC and say this: Okay, you have one job. I hate that phrase, but it is true here. All you have to do, is announce a “Shazam #1” by Steve Orlando, Scott Kolins and Romulo Fajardo Jr. “From the Pages of “Justice League: The Darkseid War” and let them build on this. One. Job.

If not, and Shazam goes back to normal at the end of this storyline, well I look forward to DC once against squandering good ideas.

Final Verdict: 8.8- Good luck even touching the hem of his cape!