“Black Badge” #1 reunites Matt Kindt and Tyler Jenkins, who last worked together on “Grass Kings,” for a story about a group of boy scouts doubling as secret government agents. Read on for our review, but be careful, as there will be some spoilers. 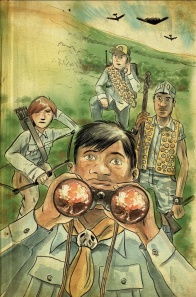 Written by Matt Kindt
Illustrated by Tyler Jenkins
Colored by Hilary Jenkins
Lettered by Jim Campbell
Matt Kindt and Tyler Jenkins, the Eisner Award-nominated team behind Grass Kings, reunite for a new ongoing series about a top-secret, elite branch of boy scouts tasked by the government to take on covert missions. Among their organization, the Black Badges are the elite; the best of the best. They are feared even by the other badges. The missions they take are dangerous, and they will only get worse as their leader’s attention is split between their mission and tracking down a lost team member. A member who disappeared years ago, presumed dead. A haunting look at foreign policy, culture wars and isolationism through the lens of kids who know they must fix the world that adults have broken.

Reviewing books, I usually try not to get too caught up on logical hang ups for my review. Mostly, that’s because I don’t think criticizing the logic of usually produces an especially good critique. All it usually does is point out plot points that didn’t make sense to the reviewer, trying to find tangible details for reasons why a book didn’t work, when there are usually deeper thematic or technical reasons why. With that in mind, I’m going to spend a lot of this review digging into the number of logical hang ups I had while reading “Black Badge” #1.

First, though, I want to get into the art, because that is one point on which I think “Black Badge” #1 almost completely succeeds. Tyler Jenkins’ style is beautiful, and though this issue is colored by Hilary Jenkins instead doing the colors himself, it retains the beautiful, water-color style that he brought to his art in “Grass Kings.”

There isn’t a ton of action in this first issue, but Jenkins is able to bring a lot to the moments where the characters are sitting around. Even though it is mostly one of the boys, Willy, freaking out while the rest of the scouts stay silent, the expressions on Willy’s face compared to those of his fellow scouts tell about as much about the characters in this issue as anything could. On top of that, there is a flashback about halfway through the issue where the only color used is green, that almost made me wish that the rest of the book was in black in white, as the line art is so beautiful. However, then it would be missing the great water colors that are in the rest of the issue. It’s a good problem for the book to have, to include two styles, both of which are great in their own way.

However, plot wise, “Black Badge” #1 starts on a bit of an odd note. There is a character, around the same age as the four main scouts “Black Badge” follows, who takes the first three pages giving this kind of strange exposition dump on how these scouts are perceived. It’s an inelegant solution to making sure that the reader understands how these four characters fit into the world, though it useful in that it creates a baseline by which to measure the actions of the characters.

Like I said, logic usually isn’t something that I put at the forefront of my reviews, but throughout this issue, it bugged me how little sense “Black Badge” #1 made. A group of kids first wander away from the school they’ve taken a trip overseas with, camp out over night near the border, cross over the border into North Korea, once they’re there, help carry out a tactical drone strike on a nuclear scientist, are allowed to wander back over the border by North Korean soldiers, and then return to the school group after being gone overnight without any repercussions.

Obviously, the idea of children being recruited by the government from the boy scouts to do overseas special ops work overseas is, on its own, not especially logical, but it’s a premise that at least seems interesting to explore. And the characters themselves seem like they will be interesting to follow as the story progresses. Willy, the new comer to the Black Badges, seems like an interesting point of view on events of the story, unwilling to just accept the terrible things that the Black Badges are being asked to help their government do. But, at the same time, Willy spends so much time in this issue asking questions that, at least to me, it doesn’t make sense for him to not know the answer to before being sent out on a mission like the one carried out in this issue. I think that part of the reason all of these things stand out as problems to me is that while the foundations of the characters seem solid, they aren’t actually all that fleshed out in this issue, except for Willy. And even then, the way that Willy is fleshed out is by showing that he doesn’t understand what is going on in the issue.

As a whole, “Black Badge” #1 just feels kind of slight. It sets up some interesting thematic points that might be explored in the future of the series, the way that Willy is unable to accept the drone strike help carry out for example, but this first issue doesn’t do enough to make these characters and their situation interesting. And when those things aren’t interesting, the only thing there is to focus on is the plot, which in this case, doesn’t quite hold up. I hope that as this series progresses, and these characters become more fully realized, this won’t be as much of an issue. But as of right now, with only “Black Badge” #1 to go off of, this issue just doesn’t really come together.

Final Verdict: 6.0 – While the water color style artwork is beautiful, the plot of “Black Badge” #1 has too many holes and not enough character work to fill them.