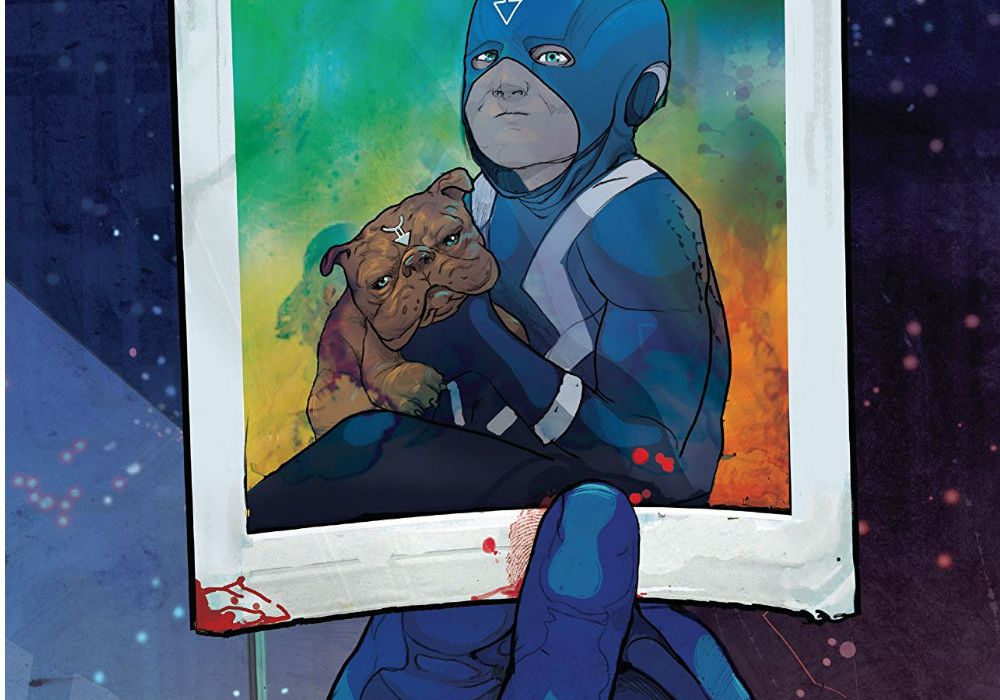 The Silent King is tested once again. Who do you fight for, Black Bolt? Who do you side with? Have you learned your lessons from your time with the Illuminati? Or will you once again abandon the humanity that made you wise in the first place? Spoilers ahead. 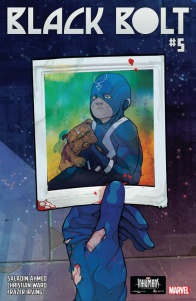 REDEMPTION COMES CLOSE…
• As Black Bolt turns the tables on the evil Jailer!
• But what about his fellow prisoners? Given a choice, will the Midnight King choose the company of thieves?
• And what hope do they have against a creature who knows their deepest secrets?

There’s been a meditative quality to “Black Bolt” over the last few issues. For all the trials that Blackagar, Crusher, Raava, Metal Master, and Blinky have gone through, the comic never plays up the melodrama, letting the situations speak for themselves. In that way, the structure of the comic is a reflection of Black Bolt himself and Christian Ward’s district artistry, at this point, has become the style of Black Bolt and his current narrative- which is why bringing in a different artist to draw the Lockjaw segments makes me take pause. (I am aware this analogy doesn’t fully hold up due to the Crusher-centric nature of last issue but stick with me.)

DC and Marvel have this issue that, especially with long running series, they see the writer as the core and as artists as interchangeable. This isn’t always the case and, I believe, it is slowly changing, but it’s always worrying when you’ve got an artistic shake up. It can break the flow of a series (I’m looking at you, Jonathan Hickman’s “Avengers” and “New Avengers”) and completely change the feel of the narrative while it is also true that sometimes the artist needs a fill-in due to outside circumstances though (such as what’s happening after next issue). Sometimes, however, a guest artist is brought in to enhance the flow of a series (Jeff Lemire’s “Moon Knight” is a superb example of this) and that is what happened here.

Frazer Irving lends his soft, almost pop-art inspired style to the Lockjaw backstory segment, giving it this eerie, grainy quality. Irving makes this section feel like it is from Lockjaw’s perspective’s as well by rendering him with shading and a higher level of detail than all the rest of the people, who are created out of borderless segments of color, making them all look flat on the page.

It acts as a stark contrast to Ward’s vibrant colors and sharp, shaded figures. Each panel feels discreet, like a snapshot of time, giving us just enough information for us to understand Lockjaw’s undying loyalty to Black Bolt as well as some more insight into Black Bolt’s upbringing. It’s not a happy one, which is illustrated through the central panel of page 2.

Black Bolt has just let out his first cry and the people who are in the room to hear it are, presumably, being killed by the noise. The panel, which takes us about half the page, is framed in a dutch angle, already setting us on edge. The central figure is bathed in shadow, with a hyper detailed face and hands, screaming and twisting with the panel. It’s darker than the rest of the surrounding panels and is a haunting image, really hammering home just how powerful Black Bolt can be if he doesn’t restrain himself.

Ahmed weaves this into last week’s surprise ending, showing us how that loyalty allowed Lockjaw to know Black Bolt had been replaced and had followed the ship to the prison. There is also this theme of loyalty running throughout the issue this month. Black Bolt must choose between going home to stop Maximus right away or saving his friends from the torturous Jailer. The sequence itself is visually wonderful, giving us the inner thoughts of Black Bolt through space around him and through the narrator. It strikes the right balance, each doing its part to enhance the other and to give us a full picture of his mind. It’s especially telling that the ghostly face that comes to his mind when he’s taking that first step is Crusher’s.

Something else I really appreciate about Ahmed’s writing and Ward’s art are their attention to detail and respect for their character’s history. Crusher using the things that were trapping him to fight back is one thing but it being a ball and chain, a call-back to his time as part of the Wrecking Crew, felt triumphant. True, he was a villain, but as this series continually likes to ask, can a villain be a good person and if they weren’t, can they learn to be better? (I’ll get more into the Jailer and his theming when we wrap up the arc).

In addition to these call-backs, we get insight into our characters through the smallest interactions- be it through their facial expressions, their conversations, or just a few key details placed around them. Raava, even in chains, is defiant, while Metal Master, beaten down, confesses his regrets to Blinky, who expresses her own fears of dying. It’s so rewarding, then, to see them freed from their torture chambers by Black Bolt. To get the gang back together to take out the Jailer, to right the wrongs that were done to them.

Each month, I praise Ward’s paneling and unique visuals (like the melting Crusher) so I’m going to skip that part and say that it’s just as good as it always is. However, this time I will gripe a little about the action scene. While visually interesting, it doesn’t have a clear line of action to follow. The pages are chaotic and the action hard hitting, evoking the right emotions of a violent struggle for freedom but the clarity isn’t there right away. It takes a few passes to figure out where to focus in each panel, which is filled with multiple figures and debris. This isn’t necessarily bad, as it makes the fight feel dire and really conveys the struggles of the characters against Spyder and the eye-bots, but it’s that lack of clarity that makes me hesitant.

Something else I’ve brought up before, but is really sharpened here, is the character-driven nature of this series. The overarching plot (escape/take out the Jailer and stop Maximus) continually takes a back seat to the struggles and interactions between the members of the prison. It invests me in this series more than most others and makes it so that panels like the one on the final page, with Crusher just softly saying “m-ma?” with this sad, broken look on his, are heartbreaking. Ahmed and Ward have carved out a section of the Marvel Universe that I never thought I could get into and made it one of the best.

Final Verdict: 8.4. “Black Bolt” speaks volumes and I am all too willing to listen.