Rock and roll heroics canary cries its way into Dinah’s new life in “Black Canary” #1. Writer Brenden Fletcher, who currently co-writes “Batgirl” and “Gotham Academy”, is writing this series solo, while artist Annie Wu and colorist Lee Loughridge aid Fletcher in bringing a stripped down approach to a title that is deserving of superstar status. 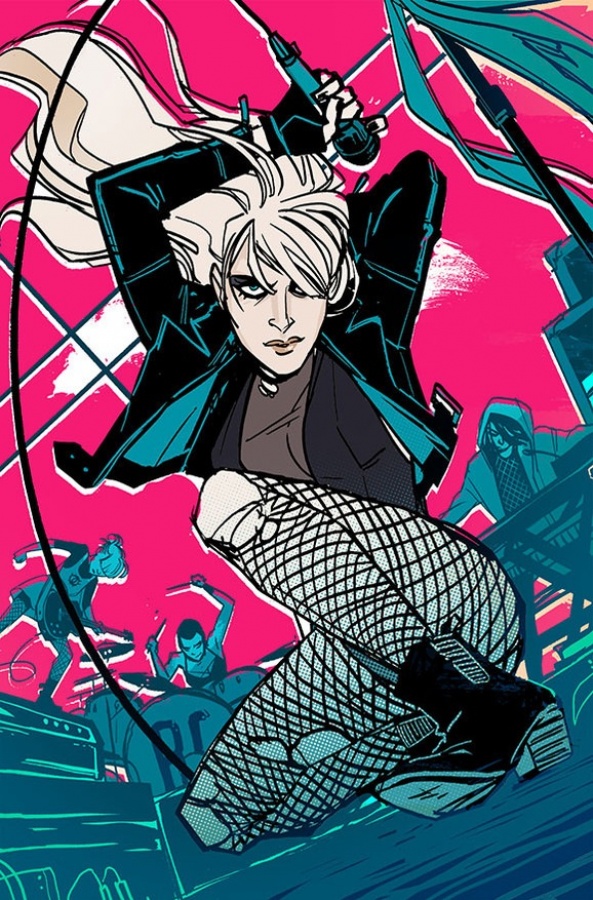 Dinah Lance hits the road! After years as a soldier and vigilante, the LAST place Dinah saw herself is on stage…but she’s quickly learning she’d die to protect the gang of misfits she’s fallen into. And she just might have to – for some reason, the newly rechristened band Black Canary seems to be a magnet for trouble…and Dinah’s not gonna believe it when she finds out the reason why! Martial arts, super-spies, and rock ‘n’ roll combine, from Brenden Fletcher (BATGIRL) and Annie Wu (Hawkeye)!

There is an understated glamour to “Black Canary” #1, where the style of the issue’s art and colors complements a story that unfolds slowly to introduce us to characters and a world full of mystery and the unpredictability and spectacle that defines rock and roll. The insertion of an article from a music magazine and an observers’ YouTube video contributes to the tone of danger and wonder that draws us in to a band called “Black Canary” whose members’ personalities and histories are only hinted at. Brenden Fletcher steeps this first issue in mystique that draws us close to characters with secrets and veiled motivations. This approach by Fletcher is bold, effective, and compelling. Dinah doesn’t know why a particular band member is in danger, yet we get to see a fiercely loyal and protective side of this bird of prey with a past. The trappings and the flash of a pure rock and roll sensibility is juxtaposed with a story about friendship, loyalty, and hints of a world just waiting to unfold. We want to follow this band and its namesake.

“Black Canary” #1 is a seamless collaboration between writer, artist, and colorist. Annie Wu deserves just as much credit for story as Fletcher does and it is evident in every page. The sparseness of words in this issue allows Wu to flex her brilliant storytelling skills and highlights her ability to convey kinetic body movement, detailed facial communication, and panel layouts that contain both chaos and fluidity. A thinly shaped panel focusing on Dinah’s eye before she goes on stage is fraught with fear and excitement. We know there is a surge of adrenaline bubbling within her without having it unsubtly explained to us. First person narration is not required and, judging by the success of Wu’s artistry, adds an aura of originality and unconventionality to how she and the rest of the creators are telling their story.

You’re not only reading this issue but listening to it as well. This is because of Wu’s evocative and highly dramatic art that keeps its focus on the characters and the profession and passion they find themselves so immersed within. That passion is music. Whether the action is a performance or a battle, a sense of motion informs every page. There is a rhythm to every aspect of Wu’s art through her use of perspective, panel layout, and choreography. A flair for the theatrical is gloriously on display when Dinah comes out on stage every night wearing a cape. She dramatically rips off the cape and begins, in grand David Bowie-like grandeur, to give her audience a revelatory and religious experience.

Fights between Dinah and strange enemies also have a musical and choreographed feel to them. During a concert, Dinah leaps off the stage swinging her mic cord and proceeds to use it against her enemies with theatrical flair. Both Fletcher and Wu depict a woman who is not only a strong soldier when it comes time to protect others but who is also having a good time doling out pain to those that deserve it. Dinah is inventive and, again, like Wu expresses throughout every aspect of her art, she is a hero who is able to carry out precise maneuvers among the chaos.

Lee Loughridge’s color palette injects the same originality and flashy pizzazz that Wu brings to her artistic style. The sense of spectacle and motion in Wu’s art is highlighted by Loughridge’s equally spectacular colors. If Fletcher allows Wu room to contribute to the storytelling, Wu invites Loughridge to add his singular voice to the proceedings. Background art is minimal to almost nonexistent and instead we get bright, stark colors that add to the unique ambience of the issue. A bright yellow sky weirdly and hauntingly serves as a backdrop to mysterious villains on a rooftop. The aforementioned mic battle is lit up with a bright orange that clashes with the black skeletal wraiths that are creepily colored purple in their mouths, eyes, and other extremities. Loughridge’s colors are attractive without being gaudy and are bold and daring in ways that are comparable to the story and art.

We feel the same sense of abandon and invigoration reading “Black Canary” #1 as Dinah does when she’s dancing ecstatically on stage. This is a book that inspires every sense (except maybe smell if you’re reading it digitally) and demands you add a soundtrack for every scene. It’s a pretty spectacular occurrence when a book about a band actually personifies music through its execution. Fletcher has written one of the best first issues of the year and brings along Wu and Loughridge to transform his story into something rich and alive.

Final Verdict: 9.5 – Crank up Bowie on your record player, throw on a cape, and prepare to be immersed in a sonic boom of a book.