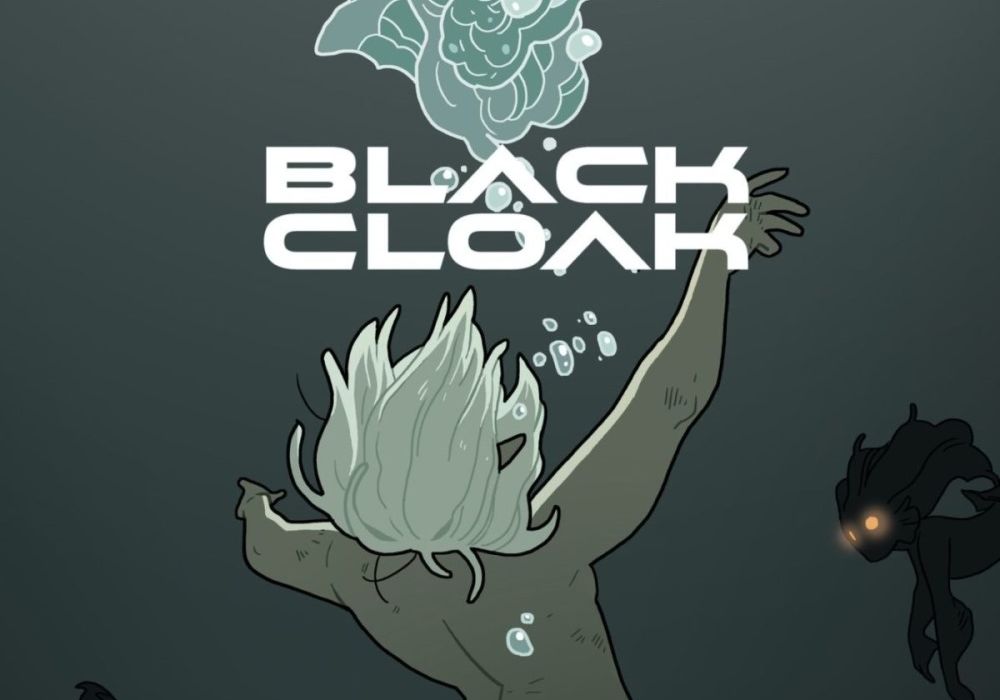 With a passing glance at “Black Cloak,” you might think you are looking at an all ages’s comic. Maybe something published by Scholastic. Then you start flipping the pages and you see blood, you read swear words, and maybe you think this is an indie book like “Scott Pilgrim.” “Black Cloak” isn’t really either of those things. It’s a unique formula, one that comes together in unexpected ways. This new series from Kelly Thompson, Meredith McClaren, and Becca Carey arrives knowing exactly what it’s about. 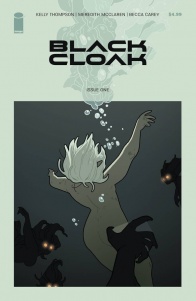 SERIES PREMIERE Eisner Award-winning writer KELLY THOMPSON heads to Image for the first time with BLACK CLOAK, an all-new series with artist MEREDITH McCLAREN! Blade Runner style mixes with SAGA-esque drama in a delectable fantasy/sci-fi blend as two Black Cloaks try to solve the murder of a beloved prince in Kiros, the last city in the known world, before his murder tips the city into war. The mystery begins in a spectacular TRIPLE-LENGTH FIRST ISSUE

So what is a “Black Cloak?” Based on the first issue, it’s sort of like a wizard detective. The story is broadly a murder mystery, taking place in a fantastical city of blinking skyscrapers. You don’t need to be teased before the comic gives up the goods; the very first image sets the tone with an epic look at the city of Kiros. It’s not the last time McClaren gets to draw a breathtaking fantasy background, and every single drawing teaches you something different about the world you’ve just walked into.

Our protagonist, Phaedra Essex (they all have names like that) is a titular Black Cloak, following the thread leading back from the murder of a royal. Which seems sort of like a big deal, the royal palace is lush, with the biggest dang chairs you’ve ever seen. Suspects will be questioned in lavish halls, grimy back alleys, beaches, mountains, and mystical elevators.

What surprises then is how much of a noir “Black Cloak” turns out to be. It’s not so much in the aesthetic style as the narrative sensibility. Every noir has that moment at the beginning where the detective needs to ascend to the offices of someone wealthy and dangerous. And you better believe that Phaedra has complicated history with every single person she talks to. Although she walks around Kiros freely, everyone keeps calling her an exile, but the story isn’t ready to tip its hand when it comes to the details. The story is confidently paced, you can trust that you will get some answers, but maybe not today.

The thing that really makes “Black Cloak” unique though, is the artwork of Meredith McClaren. As I implied at the top, McClaren has an art style really suited for all ages comics. Fortunately, she’s had a history with drawing those. I am most familiar with her “Adventure Time” and “Bravest Warriors” books. Her art is simple, looking more than a little bit like old-school cel shaded animation. And I cannot deny that her style conveys a warm vibe. You would have little trouble believing this was a comic about emotionally intelligent people who hug.

Not only is this not the case, McClaren shows us just how much range she has. This isn’t just because of the juxtaposition of the story and art. McClaren does stuff with her gentle linework and soft colors that is genuinely affecting. The first scene, showing us a victim’s final moments has some of the creepiest merefolk I’ve ever seen. And when Phaedra reminisces about lost love, you will not believe how much yearning comes across. The lighting is also top notch, casting different pages into different color palettes. Image comics publishes a lot more fantasy comics than it used to, and that rules.

Comic fans know that their favorite medium can be wonderfully immersive. You can lose time marveling over a page, and your imagination does the work of showing you what is just off the side of the panel. “Black Cloak” is a fantasy comic to get lost in. A mélange of familiar tones come together in a charming, ominous fantasy city, “Black Cloak” will definitely be an ongoing series you will want to follow.