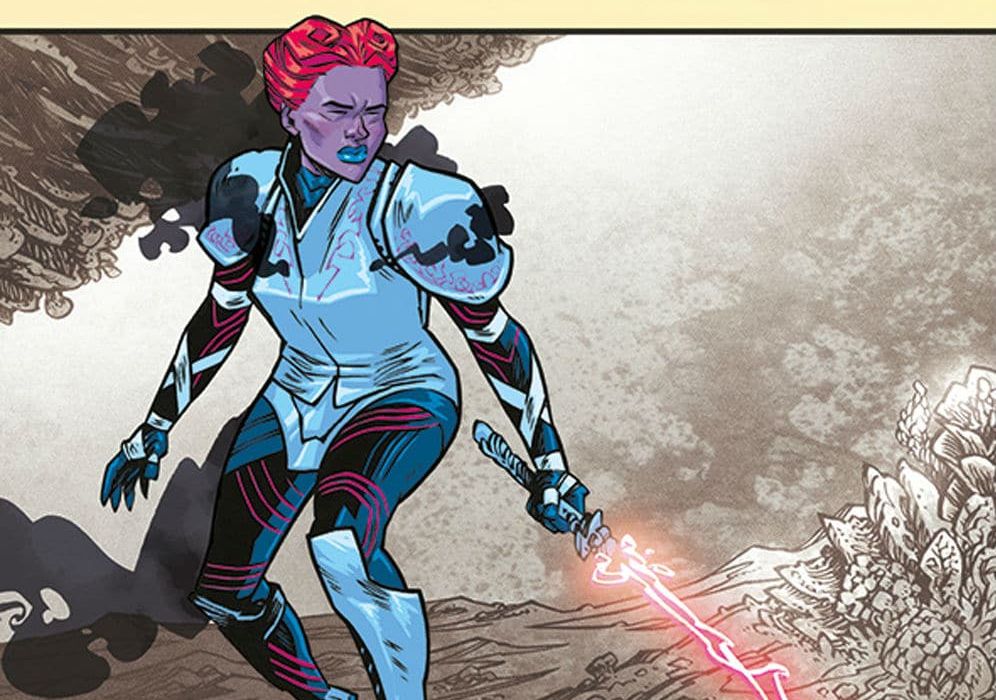 If you weren’t already sold on the creative team and concept of “Black Cloud” (yes, the both of you), there is still time to remedy your mistakes. Issue three brings the mysticism and wonder of the other world, let’s see how it affects the series. 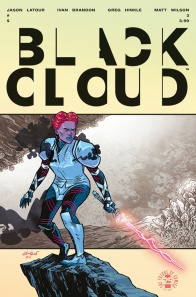 What’s worse, a memory or a bad dream? Zelda is stuck in one and running from the other.

It is certainly clear that Brandon and Latour have some big world-building plans just from flicking through this issue. For a third chapter, there are a lot of introductions here – we’re finally shown the word Zelda is from, and delve right into her backstory. I’m particularly interested in the nature of the other world the team have created, and specifically how it co-exists with our own. It seems to be a sort of heaven, as Zelda was exiled to earth or rather escaped to here, making for an interesting corruption in paradise style story.

We watch as Zelda witnesses her memories of her exile from the other world, creating an interesting character contrast. On one hand, we watch as a headstrong Zelda is mentored by the old man, talks shit to her friends, and goes armour ready into battle. While this is happening, the present Zelda is watching as <i<A Christmas Carol type ghost, lamenting and cringing at the person she used to be. It’s interesting to see her reactions, giving us a full sense of who she was then and who she is now. The best insight into this is when present-Zelda cringes at herself saying ‘Because we’re puppets.’ There’s a clear distinction shown there between the two instances of her, and it makes for great character building.

I may be biased here, but I love when creators choose to worldbuild on a scale like this. It reminds me somewhat of the opening to Kentaro Miura’s “Berserk”, with “Black Cloud” also introducing us to significant, almost religious figures cloaked in shadow and bearing great power – the council deciding Zelda’s fate. Yet Latour and Brandon hold back all the important details about them, only alluding to their greatness, and it’s this drip-fed information that I love to go full-detective on. The opening of this issue is a great example of this, having Zelda’s mentor talk to her about a great beast which he once summoned just to be slain. We’re only shown the old man, and him talking about the beast, but the whole scene just drips with intrigue. What was the beast? Will we ever know? Will we find out next issue???

Greg Hinkle gets a great chance to go to town on the fantasy aspects of “Black Cloud” in this issue. Immediately we’re thrust from the gritty real world setting of the past two issues and dragged into the depths of the ocean into Zelda’s memory – a sequence that is drawn with drunken bravado that throws the readers right into Zelda’s POV. In this new world, Hinkle renders a setting that feels familiar but at the same time refreshingly alien. There are people bearing armour, fantastic beasts prowling around and instances of magic occurances. But at the same time, Hinkle includes into the environment outcrops of abstract crystals, school-like apartment blocks, real world wonders (one panel has something resembling the Arc de Triomphe in the background) and glowing Aztec sculptures. This mishmash of cultures is beautifully rendered, and very telling that this environment could be a reflection of the real world.

What I was pleasantly surprised to see were the Kaiju-esque monster fights. I’m almost surprised I’ve never seen Hinkle’s name on a Godzilla comic because some of these beasties are right up that alley. He uses a sense of scale brilliantly as soon as they’re introduced – a giant crustacean, vulture and dog-rhino thing all glare down at a tiny looking Zelda amidst a barren landscape. From there, we get a tightly scripted action sequence that is eseentially Zelda throwing a lightning bolt. However, in Hinkle’s hands, the action becomes an elegant sequence of twists and turns, as Zelda deftly summons the energy into existence, dashes towards and around the creatures, and hurls her quarry like a veritable Olympian goddess. Hinkle understands the gravity with which this story is told, and brings it to mythological heights.

Once the setting goes back to the present day and the real world, Hinkle gets to combine his dizzying fantasy world with our own world, flaunting his artistic skill even more. The one-page splash is especially impressive, with Hinkle sweeping the camera over a literal giant male eating a subway train in the manner Caesar would consumer grapes laying out on a lounge. The cityscape before him slowly turns to the fungi-infested flora of Zelda’s world, all-corrupting as it drips over bland architecture to create an aesthetically pleasant scene. It’s a great set up, almost creating a ‘You’re probably wondering how I got here’ moment as the setting of the real world become drastically apocalyptic. With this story telling, Hinkle shows that he’s got the chops for a story of this scale and more.

Matt Wilson’s colouring is absolutely vital to the tone of this issue. His combination of colourful neon tones highlighting a more muted palette lends originality and style to the setting. The opening sequence of Zelda tumbling through the ocean depths is made even more dizzying with Wilson using blurry smudge effects on the palette, creating a very ambiguous tone. It’s great storytelling, and could not have been done with Hinkle’s work alone. Another thing Matt Wilson makes great is Zelda’s homeworld. His use of beautiful glowing green crystals, hazy pinks and purples and shining blue sentient heads amidst the duller, desert backdrop creates an original and interesting setting for the story of “Black Cloud” to play off. I can’t overstate Wilson’s contributions here – this book could be lost amidst other generic fantasy stories if it wasn’t for his talent.

It’s very easy to see how this is a book of high tier creators. Every aspect works well in sync with each other, and every aspect tells a great story, and alludes to an even bigger one in the future. Latour, Brandon, Hinkle, Wilson all continue to deliver a highly original and incredible cool fantasy genre blender with “Black Cloud” #3, so get it while it’s still hot.

Final Verdict: 9.0 – “Black Cloud” #3 escalates to a new level with this issue, as every contributor gets to show off their talents in a brilliantly told origin issue.