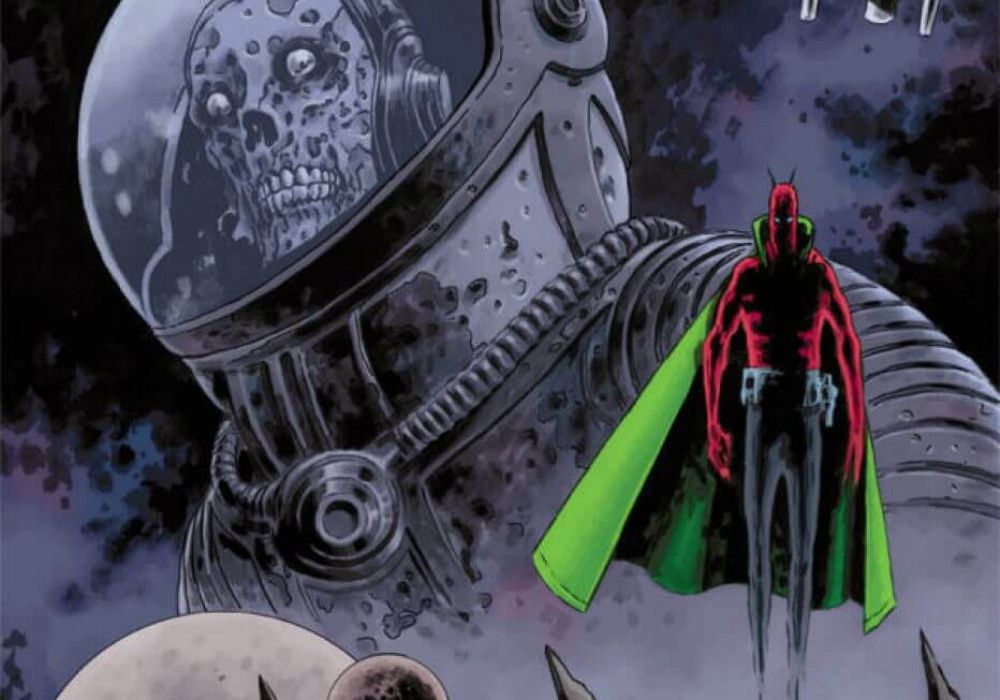 One of the best new superhero series this year puts the spotlight on one of it’s quieter characters in “Black Hammer” #3. Read on for our spoiler free review. 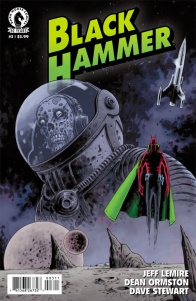 Written by Jeff Lemire
Illustrated by Dean Ormstom and Dave Stewart
Long before Spiral City’s greatest heroes were written out of their universe, the Martian champion Barbalien was already stranded far from home. Disguised as churchgoing Mark Markz in the timeless farming community where the heroes find themselves trapped, Barbalien faces a terrifying personal decision, even as he relives his painful past!

Every year there are a lot of superhero centric titles launched. Not all of these come from Marvel and DC and not all of them have the staying power they need. Those titles also don’t have Lemire, Ormstom and Stewart doing some of their best work in their careers. “Black Hammer” focuses on superheroes from a bygone era but it’s not a superhero story. It’s a deeply human story with commentary on the status of superheroes. “Black Hammer” #3 has very specific focus but it doesn’t lose sight of the bigger goal. It’s a beautifully drawn and colored issue that packs a heavy emotional punch.

“Black Hammer” #3 puts the spotlight on Mark Markz, the J’onn J’onzz-esque character of the series. Like the rest of his “family”, he’s trapped in this town that might be real, might be an illusion, might be something else. In this issue we get to see his origin and uncover a big part of him that’s been hidden from the reader (that I won’t spoil here). As Mark tries to find something new in his stagnant life, he’s brought back to all the memories that got him here and gets closer to making what could possibly be a very big mistake for his well being.

“Black Hammer” is damn good. That’s this review in a nutshell. I haven’t been this impressed with a series this quickly in a very long time. Lemire’s writing is tight and it carries a lot of dread and melancholic reflection. The first 2 issues of “Black Hammer” did something similar but there’s something more nuanced to someone like Mark who feels like an alien out of place in two different worlds. While a master shape shifter, he’s still not able to completely conform to the forced upon social constraints of any world. It gives him a personal tragedy just like the rest of the characters but his has a lot more weight because it’s deeply relatable for so many people who might be reading this.

Tragedy is at the center of this comic book but Lemire doesn’t tread on it with just big moments. There’s subtle things happening under the surface that completely rely on Dean Ormstrom’s fantastic artwork. It may sound very enthusiastic or exaggerated on my part but I don’t think I’d be as into this book if it didn’t look like this. “Black Hammer” relies very much on it’s mood and imagery. The feelings of longing, loneliness, and sadness all come through because of what Ormstom does with these characters. There are frequent, beautiful shots of actual inner pain in the detailed expressions and it allows the book to be an exercise in showing, not telling. There are gorgeous, wide shots of this desolate little town that looks like manifested loneliness.

On top of this, there are gorgeous, wide shots of this desolate little town that looks like manifested loneliness. “Black Hammer” is like a bizarro Smallville that’s lost all it’s hope and wonder. It’s the darkest sides of Americana and this is only something Ormstom could convey with large empty space and smaller scaled characters. Stewart’s colors bring this feeling all together in a gorgeous package through the use of muted browns and subtle greens. The flashbacks have a wonderful pulp vibe that suits Mark’s story very well and continues to make “Black Hammer” visually unlike any of it’s contemporaries.

“Black Hammer” #3 is rooted in superhero mythology but it’s really the story of a man who wants to not lie about who he is anymore. Lemire, Ormstom and Stewart are crafting something incredibly special here that cannot be missed.

Final Verdict: 9.0 – “Black Hammer” is a book that deserves all the hype it can possibly get. This is great work.