Rucka and Scott’s sinister and cerebral magical mystery thriller is unfolding at a slow but sure pace. As a new set of shady characters are revealed Rowan’s world begins to expand even as the net around her starts to contract. 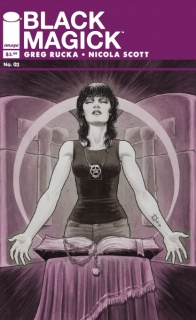 Book One: The Awakening. The threat begins to reveal itself. Rowan casts twice.

Greg Rucka is a busy man. What with his prolific work for Marvel and DC and, more recently, his numerous contributions to the Star Wars universe including the newly released “Before The Awakening” tie-in (for movie some of you may have heard of called The Force Awakens) he could be forgiven for being a little less active on the non-franchise front.

And yet, consistent as clockwork, December marks the release of the third issue of Rucka and Scott’s Creator owned comic, and, while its unlikely to garner quite as much press as the adventures of Poe, Finn, and Rey, its definitely a book that deserves your attention.

Rowan Black has managed to keep her two identities, detective and magic practitioner, comfortably separate for years, but now a string of murders seems to be threatening to twist her private and professional lives together in a dangerous and unforseen way. Someone seems to be targeting her, taunting her from the shadows, and as the body count begins to rise in Portsmouth Rowan’s forced to fight magic with magic.

As might be considered pretty standard for a police procedural, the first two issues each contained a death that motivated the plot, pushing along the narrative through investigative means. This latest issue bucks the trend, slowing the pace slightly and focussing on the more frustratingly bureaucratic side of police work. While this might not sound as riveting as self-immolation and dismemberment, Rucka’s skilfully woven narrative and believable, nuanced dialogue turns in on itself nicely. The result is more beguiling than boring, and this chance to see the characters breathe and interact with each other on a more human level definitely builds bridges beyond those you usually see in a comic book.

Of course, this is a magic-infused crime book, so it’d be pretty odd if it defected completely to the realms of kitschy psycho-drama. Rucka balances the lighter, more believable side of the narrative with the introduction of a shadowy organisation who might represent the book’s biggest departure from reality get. While their motives and operating procedure are still purposefully vague, Rucka manages to draw out a sense of otherness that makes them feel instantly ominous.

The lack of a true focal point for the issue in terms of narrative does make it a little less gripping initially, but Rucka’s smooth and focussed dialogue soon manages to pull you into the world of Rowan Black in a deeper, more relatable way

The slower, more human angle of this issue also allows us to focus on what Scott does best: nuance. Her panelling opens up even more than the first two issues, with big, expressive pages that feel as though they zero in on the emotion of every single scene. This issue is basically a series of conversations, and yet, rather than reduce the art to a number of talking heads, Scott makes subtle use of slightly skewed perspective, unusual angles, and a breathtaking range of facial emotions to keep each exchange feeling fresh.

Considering this is a book with ‘magick’ in the title, there’s a distinct lack of spellcasting to be seen in the first three issues. Rucka and Scott’s willingness to hold off on using magic in this book not only swings the focus to the characters themselves, but really amps up the tension when the lid is finally lifted and a spell is seen in action. The splash of ephemeral colour that springs from the page lifts the action from the profane to the sacred. The restraint of these earlier issues feels as though it’s setting up for a truly epic release further down the line.

“Black Magick” might not be a book for every reader. It doesn’t rattle along with the frantic pace of a Marvel book, and doesn’t have the earnest bombast of a DC title. But Rucka’s introspective writing and Scott’s truly accolade-worthy art combine to create a very special kind of magic. Three issues in and they’ve already managed to create an atmosphere that dances between the real and the fantastic, and offer up a collection of characters who seem at once engaging and enigmatic.

The success of this series is its emotion. It’s been subtle, and self-reflective, focussed on development of three dimensional characters. There’s a confidence to Scott’s nuanced art that so far has handled understatement well but, with Rucka’s introduction of a new, dangerous element in this issue, I can’t help but feel we’re on the brink of something grander.

Final Verdict: 8.0 – There’s magic in every moment of this issue.