After a “Wonder Woman” hiatus, “Black Magick” is finally back! The last issue of the series showed readers the origin story of protagonist Rowan Black but also opened up a few more mysteries surrounding the main story. For the first time since the hiatus, the full creative team is now zipping back to the present to resume Black’s ongoing quest to figure out who is trying to kill her and why while she tries to keep her head above water at her day job. The book mixing the occult and detective noir genres is finally back but with such a long break is the quality of “Black Magic” high enough for readers to keep up with the comic? 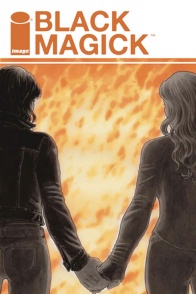 “AWAKENINGS II,” Part One The Holy has been desecrated, the Hammer is closing in, and the Dunridge case hits a snag…one that only reinforces Morgan’s growing suspicion that the killer he and Rowan are seeking may be none other than Rowan herself.

“Black Magick” #7 jumps right back into where issue #5 left off as if a hiatus never happened with the series. The title finds one of the bleakest ways to kick off the story with an exploration into some of the mysterious villains of the piece. Rucka has been building up the antagonists of the story for several issues and opening up the comic with a mysterious cold open keeping the reader at arm’s length is a wonderfully cryptic way to try and pick the story back up from square one. Rucka continually adds some slick characterization to the title and makes the detective office Black works out feel like more than a convenient place for a small dash of narrative to unfold before Black goes on her next big Wiccan adventure.

As Black’s investigation continues, she continually see’s new aspects of her coworkers that keep her on her toes. Black is hiding a lot of big secrets and watching her trying to hide from them from the police and the supporting cast makes for a fascinating read. While this single issue is a strong installment to the larger story, the comic doesn’t bring something as unique or novel as the past couple installments of the book. This series has had some fantastic cliffhangers and this one is a just a little weaker than the others. However, when the comic finally gets to the end of Black and Alex’s journey there’s a nice culmination of events melded with the art delivering an emotionally charged final scene with the duo.

There’s a novelty to seeing Nicola Scott’s beautiful work in black-and-white that has not worn off even after half-a-dozen issues into the comic. Scott continues to draw hyper-detailed and expressive work adding a hefty amount of variety to the medium. The big facial expressions always let readers know what characters are thinking and add a large portion of subtext other writers would explain away with endless boring dialogue. “Black Magick” is not a particularly wordy comic and it’s all the better for it at the end of the day. The montage sequence showing Black and her partner working their day job is a beautifully artistic way to illustrate time passing. The ritual scene where the cast is huddled around the fire at the end of issue hits a high emotional beat.

Now that readers are more familiar with the direction of the plot and story, it would be great if Rucka could start moving the narrative together faster in the next few issues. If Rucka is not interested in squaring Black off against the main villains of the series, raising the immediate stakes or placing an antagonist at the police station would be a welcomed addition to the plot. In the next couple of issues, this criticism will likely be void and the creative team has hinted at some supernatural antagonists posing a direct threat at the protagonist and her supporting cast.

If “Black Magick” #7 tells readers anything it’s that this series is definitely is going to take time getting to the final destination but will do so with an exorbitant amount of grace. The full creative team wisely connects the occult and Police drama genres to produce a comic which feels so unique. Even though the installment is light on plot, all of the atmosphere in the story hits just the right beats from the cryptic opening sequence to Black’s extra-curricular Wiccan activities. The tail end of the issue just before the cliffhanger seems to be a promise from Rucka that the series is going to move forward and attempt to find the killer with a renewed focus.

Final Verdict: 8.0 – “Black Magick” #7 is a back-to-basics issue of the series catching readers up to the series’ supporting cast while promising some big moments in the near future.