MacArthur Genius Ta-Nehisi Coates and legend Brian Stelfreeze mark a milestone in Marvel history with the return of the king. 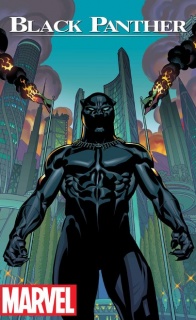 A new era for the Black Panther starts here!

Written by MacArthur Genius and National Book Award winner TA-NEHISI COATES (Between the World and Me) and illustrated by living legend BRIAN STELFREEZE, “A Nation Under Our Feet” is a story about dramatic upheaval in Wakanda and the Black Panther’s struggle to do right by his people as their ruler. The indomitable will of Wakanda — the famed African nation known for its vast wealth, advanced technology and warrior traditions — has long been reflected in the will of its monarchs, the Black Panthers. But now the current Black Panther, T’Challa, finds that will tested by a superhuman terrorist group called The People that has sparked a violent uprising among the citizens of Wakanda. T’Challa knows the country must change to survive — the question is, will the Black Panther survive the change?

It’s hard to believe that it’s been fifty years since Stan Lee and Jack Kirby, two Jewish Americans, created one of the most enduring  symbols of African royalty in western popular culture. Since then Black Panther has gone on to become a mainstay in both the comic book world and the cultural consciousness at large. An indomitable warrior-king, emissary of the enigmatic nation of Wakanda, and one of the smartest people alive, Black Panther has been both friend and foe of the Avengers, but rarely have we had the chance to see any lengthy interaction between the king and his kingdom. That is, until now.

Coates and Stelfreeze’s all new arc roots T’Challa, the most iconic of all the Black Panthers, in a Wakanda on the verge of tearing itself apart. Since T’Challa’s sister’s brief but tumultuous reign as Black Panther and subsequent sacrifice during Hickman’s run on “Avengers”, the nation has been shaken by threats of civil war, and the question on many Wakandan lips seems to be ‘Do we need a monarch at all?’ This is where “Black Panther” #1 picks up, with Black Panther and his guard quelling a miniature uprising at a vibranium mine, where T’Challa first notices the touch of an outside influence on his people. From there we enter The Golden City, Wakanda’s capital, and discover that the schism within the country’s people rises as high as the Dora Milaje, Black Panther’s personal guard. Then we meet Aneka, a rogue Milaje sentenced to death by the King’s mother for taking the law into her own hands and saving a group of young girls from the lechery of a outlying chieftain. Finally, we get our first look at the rebel forces at the gates of a culture that has stood strong against invaders for longer than almost any other in Marvel’s history.

“Black Panther” #1 is a first in a lot of ways. While Coates may be well known as a writer and lover of comics, this is his first foray into the world of comic creation, and he shows a strong grasp of the medium from the very first page. Coates wastes no time setting up a number of thematic concerns that are clearly going to characterise his initial 11-issue run. The most obvious of these is the representation of Wakanda’s external struggle through their sovereign’s internal conflict. As this arc begins, the characteristically collected king is unsure of himself and his position. Disconnected from the previous Panthers and his people, T’Challa fumbles through this issue, trying desperately to piece together clues that might lead him to the root of his nation’s problems. The sense of instability and impending chaos in this book feel rooted in the real world, and Coates has managed to give believable and empathetic voices to the multiple factions he’s pitted against one another. This run promises to be the first extended look into Wakanda that we’ve ever had, and it’s a bold move to bring us in so close to boiling point. This issue feels pregnant with possibility, beyond the traditional good/bad dynamic that many mainstream comics stick with, steering closer to the politically ambiguous angle offered by Game of Thrones.

And speaking of our first look at Wakanda, Stelfreeze’s translation of the mysterious nation from brain to page packs a powerful punch. Aiming to mesh heritage with futurism, Stelfreeze is ‘pulling from cultures all over the continent’ to establish a pan-African aesthetic that is both recognisable and unique. From the clean, towering lines of the Golden City to the earthy mines of the border regions, there’s certainly a duality to the ancient city that helps build the sense of a grinding, tectonic shift between eras. While we don’t get a huge introduction to the city at large, there are enough teasing panels of the intersections between high-tech Wakanda and historically poignant Wakanda to ensure you’re ready to get fully immersed in this culture.

Stelfreeze and Coates never seem more in tune with one another than in their interpretation of Wakanda’s truly unique tech. Stelfreeze has created a vibrant, kinetic style of flexible metal that mimics tribal markings for T’Challa’s iconic cowl and the Dora Milaje’s tattoos. But rather than just offering up a multitude of flashy adornments, he’s already started building a history around the technology that makes Wakanda feel more lived-in and thought-through than it ever has before. The most notable addition to Wakandan culture is probably the Kimoyo, a simple beaded bracelet that utilises the power absorption of vibranium to act as natural wearable tech. This subtle introduction to the wider world of Wakanda is our first look at the intricacy with which “Black Panther” #1’s creators have approached their new world and promises a richness of vision still to come in later issues.

With Captain America: Civil War looming large on the cinematic horizon, and Chadwick Boseman’s fully-suited appearance in the trailers promising a real-world T’Challa that will shake the MCU, it’s great to see that his comic book counterpart has been given a reinvigoration worthy of his regal standing. While there’s a lot of initial world-building going on in this issue, Coates’s slick style means that we never feel overwhelmed by exposition. With references to previous goings-on in the Marvel universe, there’s more than enough in this first issue to excite even the most hardcore comic book fan. Coates and Stelfreeze still also manage to keep it accessible enough for it to be the first book you ever pick up.

Final Verdict: 8.4 – A fitting return to form for a character who deserves a more in depth look into his wonderful world. Long live the king.