In this issue, T’Challa calls home. Imagine what the roaming and long distance charges are going to be like! 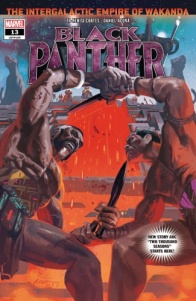 A NEW ARC – AND FIRST CONTACT WITH WAKANDA PRIME! “TWO THOUSAND SEASONS” STARTS HERE! Weeks ago, the Black Panther disappeared on a mission into deep space, leaving behind his country, his family and the woman he loves. Find out at last what Wakanda Prime has done without its king. As the race against N’Jadaka’s expansion continues, the goddess Bast makes a dramatic move and T’Challa reaches out for the life he left behind!

After several issues away artist Daniel Acuna returns with the start of the third book in the Intergalactic Empire of Wakanda ‘Two Thousand Seasons.’ While previous artists on the series were fine, there is something to Acuna’s painterly style that does a better job at uniting the terrestrial and the interstellar drama aboard the Mackandal as everyone waits for T’Challa and are effected by his absence.

For an issue that primarily takes place aboard the Mackandal, a large interstellar spaceship, Coates and Acuna do an excellent job of making it feel uncomfortably small and confined. As T’Challa experiments with the ships crystal power supply to contact Earth, the man who would be Emperor is turning the ship into a powder keg. After the credits page, Coates and Acuan build up that uncomfortable tension in a pair of pages with a little help from Princess Zenzi-Bast. It’s here that Acuna’s return to the book is immediately felt, in the way he uses the various light sources aboard the Mackandal as mood lighting to embellish and reflect what the crew is feeling. If there was one thing that was lost when Acuna wasn’t around it was how his process created a both a lived in feeling with an expressionistic lean.

As Zenzi-Bast sits in the Captain’s chair her front is washed in calming blues while her back catches an ominous glowing red that only seems to grow as she teases M’Baku about the equality aboard the ship and who is primus inter pares (first among equals.) Through the use of mood lighting you don’t really need Coates script or Joe Sabino’s purple lettering to understand what she is doing to the captain of the ship. All you need to see his the transition from a calm blue to a growing red in M’Baku’s figure. Coates scripting and Sabino’s lettering are incredibly useful in setting the tone for Zenzi-Bast as cat like, in the way we anthropomorphize them, and how that represents their differing perspective to everyone around them. The way Acuna draws her yawning and the transition to a sharp close up of their eyes is wonderfully effective.

Dwindling power supplies and the jabs from a child god isn’t what is eating away at M’Baku. Coates after a year of buildup, and laying plenty of ground work in the previous “Black Panther” series, calls his lead character out on his stuff. The best thing Coates and Acuna do in this issue is create the feeling of T’Challa’s absence. Even though he is present in just about half of the pages in this issue, the T’Challa readers knew from Coates is prior run and those previously hasn’t really been around in this present volume. Even with his memories restored, he still acts as he did previously with all the arrogance of a man with no responsibility and all the latitude in the universe. Princess Zenzi-Bast and M’Baku are clearly operating at different levels, but there is still a shared acknowledgment of responsibility to other people. As M’Baku asks T’Challa to reconsider and slow down turning the ship into a Space Hulk, he brushes his friend and commanding officer aside without a second thought. That is something M’Baku no longer has patience for.

The Intergalactic Empire of Wakanda has been a worthwhile exercise in space opera. The action sequences however have left me slightly wanting, I wouldn’t call any of them bad but they tended to operate in the way comics represents shootouts or dogfights. The flow to these pages are understandably patterned around action and reaction. That isn’t the case as M’Baku and T’Challa brawl about, their frustrations boiling over, Daniel Acuna gives us a plainly great fight sequence. By removing lasers and space ships, scale, from the equation Acuna isn’t bound by the patterned response. Instead we follow their choreography as M’Baku parries a strike and goes in for a chokeslam or T’Challa hitting a Pele kick and M’Baku recovering from it. The choreography of this sequence is good, but what makes it excellent is how Acuna uses the choreography to form the reading line through the page to tie everything together into a seamless flow of action. That Pele kick into recover sequence is three panels, but the way Acuna uses the arc of the kick and differing perspectives of that action uses these three panels to form a semi-circle or ‘2’ like line that flows together as if it were one image. With the addition of some thudding sound effects and some action lines and you have an excellent sequence.

Meanwhile back on Wakanda Prime, Storm and the rest of the royal family continue on with their lives and search for ways to contact T’Challa. This is an effective B-plot for the issue, one the series hasn’t really gone to that much. While it sets up the fact that this arc promises to bring T’Challa home, it forms this nice counterweight to the tension aboard the Mackandal. Functionally the two plot threads are similar in their scenario, groups of people sit around and talk about the return of Gods and a missing friend, but aesthetically an emotionally they are vastly different. There isn’t a mounting sense of tension, more the slowly creeping acceptance that T’Challa may be lost to them. Acuna also uses natural lighting in an early sequence between Storm and Councilman Hodari that feels like it’s out of a coffee commercial. Compared to the moody heavy lighting aboard the Mackandal. This B-plot becomes something of a dramatic release valve that allows the creative team to cut away and slowly build it back up.

While Ta-Nehisi Coates tends towards a more novelistic and controlled pace, “Black Panther” #13 is a strong issue by itself. As the creative team slowly build tension on top of the dramatic tension that has been building in the previous twelve issues. It’s here that the novelistic approach pays off, on its face M’Baku’s frustrations are derived from T’Challa’s action in this issue they are also supported by all that has come previously.

Final Verdict: 8.0 – With the return of Daniel Acuna, “Black Panther” begins its third arc in strong fashion as all signs point to a meeting with Wakanda Prime and reckoning with T’Challa’s actions.