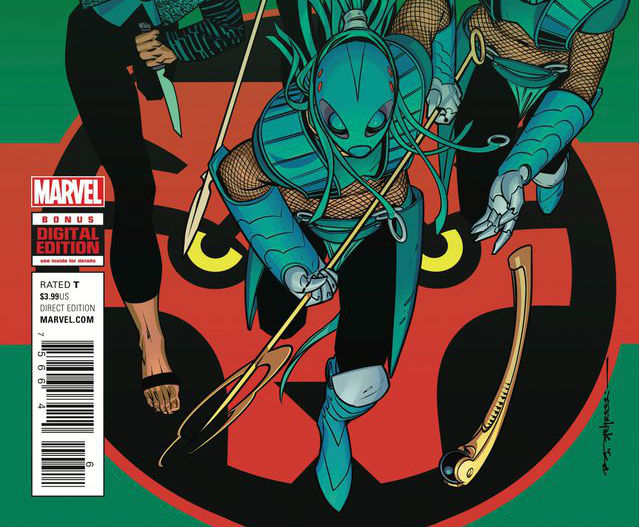 The tensions in Wakanda threaten to tear the nation apart. Coates’ mammoth, multi-stranded narrative pulls tighter and tighter; something’s got to give. 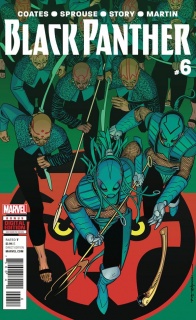 RISE OF THE DORA MILAJE! T’Challa’s failures as king are revealed to the UNITED NATIONS! Ayo and Aneka, the Midnight Angels, are courted by Tetu and The People to raise Wakanda to glory, but at what price? The storyline that has critics raving and retailers selling out continues!

Coates’ first stab at the world of comic-book publishing has been… pretty damn successful. The MacArthur Genius has managed to reinvigorate and reinvent a character who’s been an integral part of Marvel’s cultural footprint since his inception, but has struggled to hold down a solo series for any great length of time. The idea of a fictional African warrior king with cat powers and control of a mythical mine of mysterious minerals is quite a complex collections of concepts, even by comic-book standards, but Coates’ run on the character has thrived by embracing the many idiosyncrasies of the king of Wakanda and his people, and expanding on it to create a whole new world.

Issue #6 of “Black Panther” sees a lot of the individual story strands Coates has created begin to meet one another. The Midnight Angels, bolstered by Tetu (and secretly by Zeke Stane) come into conflict with the king’s personal guard. Meanwhile T’Challa finds himself moved to action against the philosophical musings of retired zealot Changamire, mounting a covert and clinical assault on his enemies in a move that shows the 8th smartest man in the Marvel Universe is still playing chess while a lot of his opponents play chequers.

It’s a complicated plot, is convoluted, and it contains a lot of moving parts that only start to make sense once they touch one another. It’s very ambitious, especially for a writer who’s still relatively new to the medium, and I still feel like it stumbles in places. But the main complaints I’d have with “Black Panther” are only that it errs on the wordy side of philosophical from time to time, a creative choice that makes sense considering Coates’ background in prose.

He’s dealt with some heavy themes throughout this run, discussing ruling styles and the nebulous relationships between a government and their people, but one of the most interesting motifs for me has been his constant return to the fallibility of leaders. T’Challa’s internal monologue has been awash with conflict every bit as engaging as the violence erupting within Wakanda from the first few pages of issue 1, and the way Coates has kept him oscillating between professional fortitude and personal weakness has been both believable and emblematic. No-where is this dichotomy more present than in this issue, which had me questioning the king’s choices while wholeheartedly supporting the difficult position the man found himself in.

But, while I’m finding T’Challa’s internal conflict infinitely engaging, I’m not sure I’d say the same for every character. Perhaps it’s just the format of 20 pages a week, or maybe it’s because Coates has quite so many sub-stories going to flesh out the world of Wakanda, but I can’t help but feel some of the satellite characters are a little underwritten. Both the stories involving the Midnight Angels and Tetu started off with real promise, but seem to have thinned out somewhat. The Angels had a touching reunion in issue 1 that seemed to offer an illicit and tender love story, and Tetu’s zealousness with rooted in a genuine love for the Earth that could have raised him above the traditional ‘dangerous terrorist’ role. However both plots seem to have settled into problems for T’Challa to solve, rather than legitimate alternatives to that Panther’s leadership. It’s a small gripe, but considering the purposeful pacing of this arc so far, it might have been nice to flesh out these secondary characters some more.

Sprouse has fully embraced the character designs of Stelfreeze, and perhaps it’s just down to repetition, but I found myself not even questioning the tactical advantage of bright white cat-suits (complete with ears) for T’Challa’s vanguard. Seriously though, Stelfreeze’s meticulous artistic knitting has created a tapestry of believably Afro-futuristic tech, clothing, and concepts that feels rooted in place and time much more solidly than most white-and-chrome future-city designs you see in media. There’s a fluidity and effortlessness to the little Wakanda flourishes (like T’Challa’s helmet as it engulfs his head) that makes this entirely fictional world feel lived in and real.

One thing that hasn’t really been touched on too much beyond subtle references in this arc has been the more mystical side of Wakanda. The past couple of issues has seen Shuri’s spirit, guided by a mysterious force disguised as her mother, as she trips back through the history of her nation in a way that feels equal parts like Aesop’s fables and Bran’s travels with the Three Eyed Raven. It’s great to hear more about the past of Wakanda, and Coates’ skill as a storyteller definitely lies in the layers of detail he brushes past to strengthen the world he’s created. I’d gladly read an Afro-centric fantasy novel based around the same political and social concepts he’s working with in this book.

On the other hand, one thing that the first five issues have been lacking is any kind of connection to the rest of the Marvel universe. There’s a real sense of the isolation of Wakanda, which helped bring the audience into the world without feeling the need to compare or contrast with existing heroes. That looks set to change, as the end of this book brings with it some very familiar faces. It’ll be interesting to see how comfortable Coates is translating more well-known voices into his own book, and I can’t wait to see what the resulting culture clash brings.