The Marvel universe is full of spies and assassins. Anybody can throw on a wig and go undercover but only a few are actually noteworthy. Black Widow is one of those few, one of the best. Trained since childhood in assassination and espionage. Taught by Wolverine and the Winter Soldier. She’s so good, she fights alongside Earth’s Mightiest Heroes. Natasha Romanoff has more than earned her title, as deadly as her namesake. Let’s see if this new mini-series is as noteworthy as Natasha. 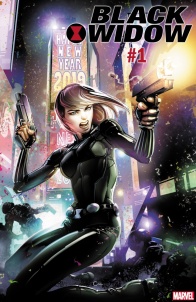 Written by Jen & Sylvia Soska
Illustrated by Flaviano
Lettered by VC’s Joe Caramagna
Colored by Veronica Gandini
…AND HELL FOLLOWED WITH HER. Natasha Romanoff was trained to kill. For years now she’s tried to overcome that programming, to side with the angels…to be a hero. And where’d that get her? Killed. By one of the few true friends she allowed herself to have. Now she’s back from the dead, angry as hell and finding those better angels harder and harder to hear. Jen and Sylvia Soska — the Twisted Twins of horror — join rising artist Flaviano to weave a web of vice, violence and vengeance that will net Natasha the biggest bad men she’s ever faced…or put her back in the ground for good.

For those who didn’t know, in “Secret Empire”, Black Widow was killed by the false Captain America. Now, to the surprise of no one, she’s been brought back to life. Seriously, is it just me or is rebirth in comics becoming the standard instead of the exception? If comic book death is a revolving door, how can we be expected to take it seriously? Just a thought. Either way, Natasha is right back in the heart of the action.

The issue opens on New Years Eve in New York. Instead of partying, Black Widow rings in the New Year by taking on a Chernayan terrorist cell with Captain America (one of the few people to know she’s alive). The terrorists are led by an imposter Captain America and have a killer robot that Natasha and Steve make short work of. Natasha has chosen to operate from the shadows as a ghost, so she’s gone after all the ‘fun’.

Black Widow’s inner monologue reveals she’s in a different state of mind. Apparently Nat’s death and comeback has left her feeling angry and violent. She decides to head to Madripoor, a notoriously criminal nation, to take her violent urges out on someone deserving. The spy asks too many questions of the local women and runs afoul of some Madripoor thugs. Romanoff handles them with ease before seeking out Tyger Tiger. The important figure gives Black Widow a target. Many Madripoor girls (literally children as young as six) have been abducted and victims of ‘No Restraint Play’. The victims all meet very violent fates. Natasha is determined to intervene when the Madripoor thugs from earlier, seemingly involved in ‘No Restraints Play’, find her.

It was pretty hard to take the bad guys in “Black Widow” #1 seriously. The implications of human trafficking and this ‘No Restraints Play’ are horrifying, but that’s undercut by the appearance of the Madripoor thugs. Comic books are a visual medium after all. Neon mohawks and questionable fashion choices don’t inspire fear, they just remind me of Bebop and Rocksteady from Teenage Mutant Ninja Turtles.

Flaviano’s art overall might not be the best fit for this book. “Black Widow” has been a grittier title in the past, firmly rooted in the whole spy-thriller genre. Flaviano’s expressions, faces and action sequences are all slightly exaggerated. It would be a fine fit on Deadpool, Spider-Man or more conventional superheroics. Black Widow’s all about espionage though. It’s definitely a change of pace from the more realistic styles of artists over the past three volumes, specifically Chris Samnee, Phil Noto and Daniel Acuña.

The opening villain is similarly underwhelming. It’s unclear (to me, at least) why the terrorists needed a Cap impersonator when they had a killer robot army to enforce their will. He’s not even a good Cap impersonator, acting nothing like Steve. After a little pressure from the genuine article, he immediately drops the act. He’s also over the top when he starts monologuing, more a caricature than an engaging enemy.

Speaking of Captain America, there’s a lot of him in this book. The first half of the issue is as much about Steve as it is about Natasha. In another comic, that’d be no problem but in “Black Widow”, it takes the focus away from the titular heroine. Steve’s hard stance against killing seemed slightly out of character too. Superman and Batman hold that position, but the Marvel universe is a little more loose with that rule. Off the top of my head, I recall Thor throwing his hammer clean through an alien’s torso during “Infinity” (it was awesome) on Cap’s orders. Steve definitely killed a couple of people back in WWII…it was just noticeably odd, enough to distract from the story.

Black Widow’s characterization was a bit odd too. Her disgust and involvement with bringing down the ‘No Restraints Play’ makes perfect sense, Natasha always has a soft spot for women and children after what she’s been through. Her anger, embracing her violent urges and speaking of the animal within, that’s different though. It reads more like Wolverine or the Punisher. It was my understanding that Nat was at odds with her Red Room programming, only embracing it reluctantly.

This comic also makes me doubt her effectiveness as a spy. If she doesn’t want anyone to see her face, common sense says wear a mask. That eye patch disguise seems like a bad idea too, she could at least throw on a wig. She wasn’t in Madripoor for more than a few hours before she was picked up on security cameras and getting into street fights. Natasha isn’t the least bit stealthy throughout the whole book. Overall, this particular issue felt a bit dull. Maybe things will improve next issue when Natasha gets deeper in this Madripoor conflict.