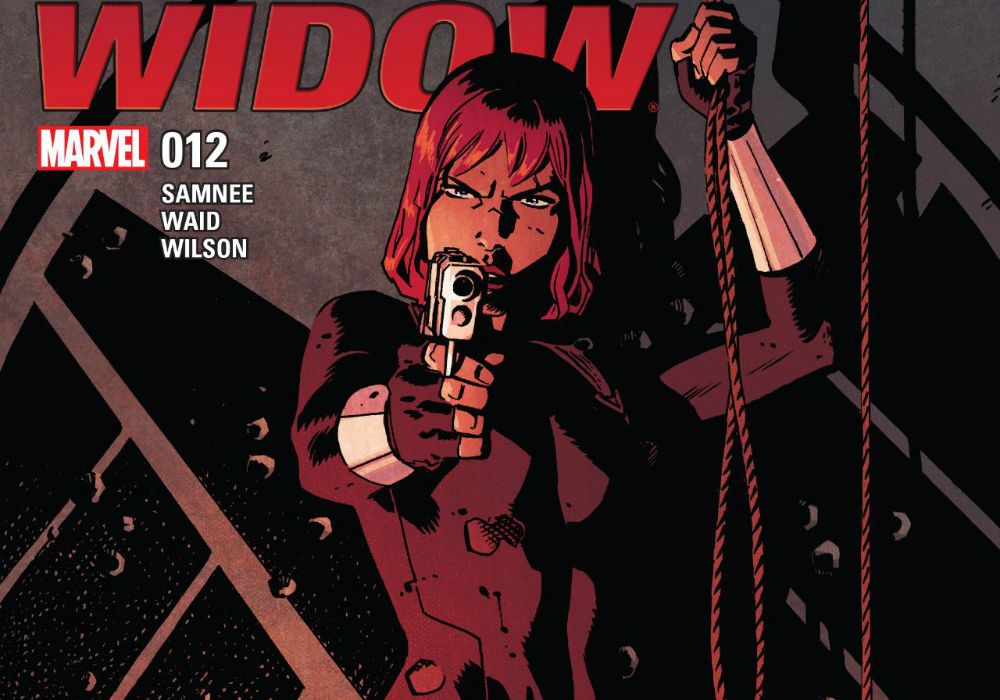 Mark Waid and Chris Samnee are best known for their Daredevil run, which Waid had stuck with for around five years. With that in mind, having their Black Widow run finish after a mere twelve months is bittersweet. However, they’ve managed to give her a genuinely character defining run in this short amount of time. But can they stick the landing? 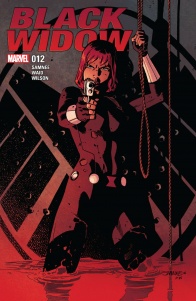 IT ALL LEADS TO THIS! All the secrets… All the lies… All the vengeance… It all ends here.

Waid and Samnee doesn’t waste time thrusting the reader into the thick of things from panel one, with Natasha already in a suffocation struggle. We get a sense from this that right to the end, this is gonna remain a high-paced comic, and they deliver on all counts here. Luckily it’s not disorienting for the reader, although how we got Recluse as the main antagonist here and not Weeping Lion (my personal star of the run) remains a mystery to me.

One of my favourite sequences in this book is right on the second page, showing Samnee’s great use of lots of small panels to create tension. We have the camera flip between the ticking clock and Natasha’s bloodied face in a scene that left me exhilarated in the best possible way. The rest of the issue continues to prove Waid and Samnee’s experience in the field as they deliver a tight-as-nails issue without managing to lose the reader’s interest. The waterfall scene at the climax of the book executes this idea – pulling the reigns on further dialogue that might convolute the scene, choosing rightly to rely on Samnee’s visual storytelling skills here.

I have to say that I find Recluse to be a little underwhelming as a villain for such a titanic arc. Waid and Samnee have built her up over the past few issues well, inserting her into Natasha’s backstory and ensuring the two characters work well off each other. However, her dialogue and overall motivation doesn’t elevate her above generic bond villain status beyond the backstory. Her monologue in the first few pages is campy enough to work with the overall tension, but she mostly feels pathetic the rest of the story as Waid and Samnee hves Natasha pretty much outrank her at every turn. Specifically, whenever Recluse tries to sway the brainwashed girls back to her cause, you can’t help but feel like it’s a lost battle, and while it’s satisfying to watch Natasha win, it seems a little too neatly wrapped up here.

Despite all this, Samnee never ceases to amaze me with his artistic talents. His characters are so lithe and deftly penned, especially in the water-top fight scene between Natasha and Recluse. It’s a credit to the artist when they don’t need to use overdrawn, bulky action figurine characters to make a fight scene impactful, and this fight scene is a great example of that. It honestly reminded me of the Obi-Wan/Anakin fight scene in Revenge of the Sith in terms of silky smooth sequential action.

Following this, Samnee pens a grounded scene in Natasha recovering from her previous ordeal. It’s a very human scene which I feel gives us a great insight into Natasha’s never-give-up attitude, despite how flawed and human she may be. These types of scenes make up much of the book, continuing the more stripped back look at the Black Widow character that Waid and Samnee have been exploring their entire run. It’s a refreshing take on the femme fatale archetype, and feels like the most interesting and believable we’ve seen Natasha portrayed in a while.

A technique of Samnee’s that I’ve loved throughout this series has been his thick, expressive ink work, which is notable particularly in this underground settings. We get an almost Mike Mignola level of shadows here, which set a very spy-noir type tone. One of subtler scenes has Natasha use Recluse’s scythe-like blade as a method of staying afloat in the waterfall. Yet in the first panel, heavy inking is used to infer that she could be stabbing Recluse with the blade, implying that Natasha may have given in to her base instincts.

To me, Matthew Wilson’s colors have been just as important a contribution as Waid and Samnee’s work on the book. His work here is some of his best yet, fitting as a conclusion to his work. The waterfall scene is dynamically colored in the limited panel that Wilson abides by, highlighting Natasha’s vibrant red hair in a literal sea of greys and dark blues. It’s a great use of juxtaposition to highlight the subject of the art, and Wilson uses it to great effect.

This use of highlighting reds in restrictive palettes continues throughout the book without bloating it. Wilson switches from dark blues to oranges throughout the book, successfully using them to convey the mood. During the water-top fight scene, the background color lights up a bright orange to highlight the ferocity of the clash. It’s a subtle way to represent each hit or struggle during the fight, and makes for some very pleasant reading.

Overall, Samnee and Waid have delivered a satisfying conclusion to one of Natasha’s best solo outgoings. Both storytellers deliver an invigoratingly human take on the Black Widow. The villain may fall a little flat in terms of originality, but has a strong rapport with Natasha and adds to the tone of the book as well. Samnee delivers some of the best work of his career, and Wilson uses restrictive palette to great effect. “Black Widow” #12 caps off an arc that although was only here briefly, left a great impression on readers.

Final Verdict: 8.0 – Samnee and Waid bring Natasha’s latest adventure to a close with incredible panache. This “Black Widow” series will assuredly be remembered fondly for years.