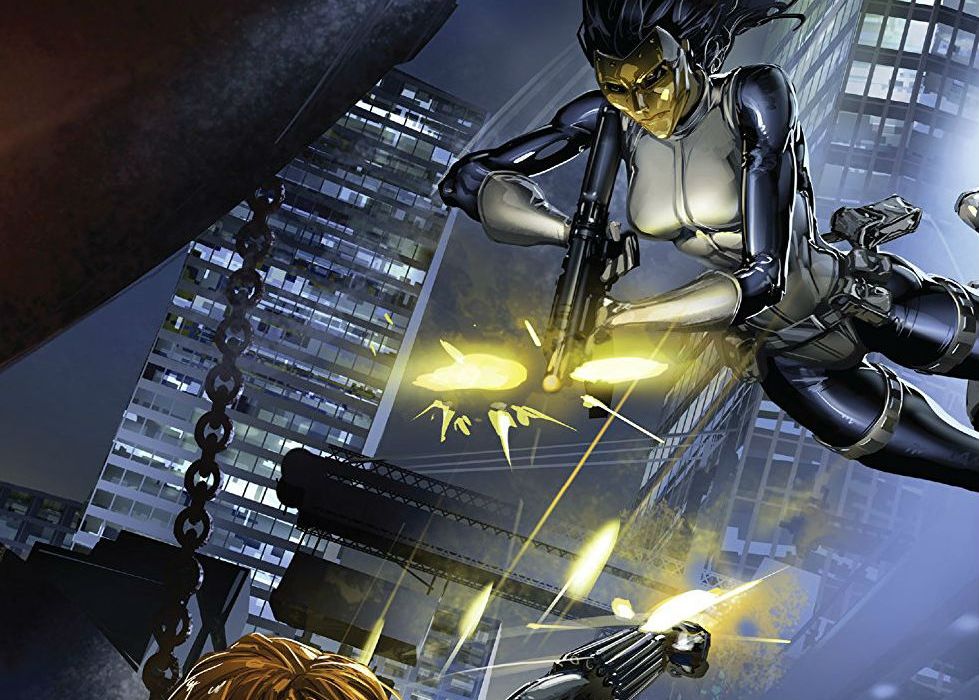 This latest volume of “Black Widow” may not be for everyone, but the disturbing story from Jen and Sylvia Soska certainly picks up some steam in this issue. 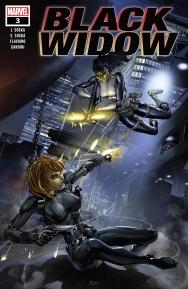 VILLAINS, VILLAINS EVERYWHERE… The mysterious, self-proclaimed Prince of Madripoor is throwing a party, and the guest list is filled with a who’s who of villains! Black Widow is looking to crash that party. HARD. That is, if she can escape the deadly clutches of Madame Masque!

There are times when it’s difficult to believe this series made it to publication. That isn’t to say it’s bad, but merely that it is a very dark yarn to spin for a character with a forefront position in the Disney empire. For the uninitiated, Natasha Romanoff’s latest mission concerns taking down a website titled No Restraints Play, which allows its users to direct barbaric live streamed torture sessions. It’s an unpleasant premise fitting of a writing duo nicknamed The Twisted Twins, and while Marvel editorial has rightly prevented any Saw-esque panels from being illustrated, the implied suffering has been troubling enough. The Soska Sisters have essentially wrapped a Marvel skin around their usual B-movie horror sensibilities, meaning the result may not be palatable to those who aren’t a fan of their previous directing efforts or at least the genre at large.

That said, “Black Widow” #3 does make a more compelling bid for mainstream attention than the previous installment. While the second issue was preoccupied with excessively violent fight scenes in a seemingly desperate attempt to appear edgy, this latest offering goes back to the character’s roots in espionage, as she infiltrates an exclusive party populated by a number of Marvel’s famous villainous faces. Baron Zemo, Sabretooth and Taskmaster are three of the main players and the writing for each is pretty much spot-on. Their interactions with a disguised Widow are all highly engaging, with Taskmaster also providing some much-appreciated moments of brevity. The fan-favorite character is depicted as somewhat gormless, without being reduced to a complete joke. Indeed, there is a sense throughout that the guests at this particular gathering are genuinely dangerous, rather than just being set dressing.

There’s an effective building of tension as she gets closer to the party’s enigmatic organizer, but it’s a shame that the ending it culminates with is so easily predictable from the very first page. As a spy with decades of experience and strategic cunning, it’s outright unbelievable that Black Widow couldn’t see this twist coming when it was staring readers in the face. However, what this finale lacks in shock factor it does make up for in visual execution. Comprised of six wide-angle panels, the penultimate page of the issue depicts a scene from Natasha’s perspective and does so in a way that is genuinely unnerving. The Soska’s roots in horror are a clear influence here, but of course praise must be given to illustrator Flaviano and colorist Veronica Gandini.

Their work is at its strongest in this closing sequence, but also shines in a fun confrontation featuring Madame Masque in the opening pages. The moonlit rooftop battle is narratively underwhelming, not least for how it shrugs off the ending to the previous issue, but the artwork is a real treat. Bookended with a “BOOM!” and a “BWOK!”, it’s a delightful face-off with added pizzazz from letterer Joe Caramagna. When the action moves to the supposedly opulent party of Madripoor elite, there is ironically less flair to the proceedings. Characters are rendered well but many panels feel bare, with little in the way of background detail. The overuse of blue and purple makes it hard to judge whether every scene is in the same room or whether characters have moved to an identically decorated corridor, with this general lack of style proving to be a disappointment.

It’s a shortcoming which isn’t distractingly noticeable thanks in large part to the entertaining dialogue. With a background in B-movies, it shouldn’t be surprising to hear that the Soska’s are prone to a cheesy line here and there, but they are kept to a minimum in this instance. There’s a sense of meaningfulness to the conversations here which was sorely missing in the last issue, an outing comprised mostly of throwaway run-ins with bog-standard thugs. The spiel delivered by the self-proclaimed prince of Madripoor is perhaps the only real stumble, feeling a tad too bloated and expository.

Certainly, the execution of this miniseries is far from flawless. That said, there is fun to be had in seeing the seedy underbelly of the Marvel Universe explored by a character other than Frank Castle, especially in such a way that feels distinctly off-kilter to typical fare from the House of Ideas. The scripting of the Soska Sisters may not be perfect, but it certainly has a personality which will likely resonate with fans of horror and exploitation cinema. In that sense, the elements that will have some readers fawning over “Black Widow” will have others rolling their eyes, but those are the kinds of polar opposite reactions that often result in cult fanbases. With this in mind, it’s difficult to give this book a resounding judgement in either direction, but it’s safe to say that those who find their interest piqued by the phrase “Black Widow splatter movie” are likely to get the most out of it.

Final Verdict: 7.0 – While it’s unlikely to be remembered as one of Romanoff’s greatest stories, “Black Widow” will definitely strike a chord with a niche fanbase.