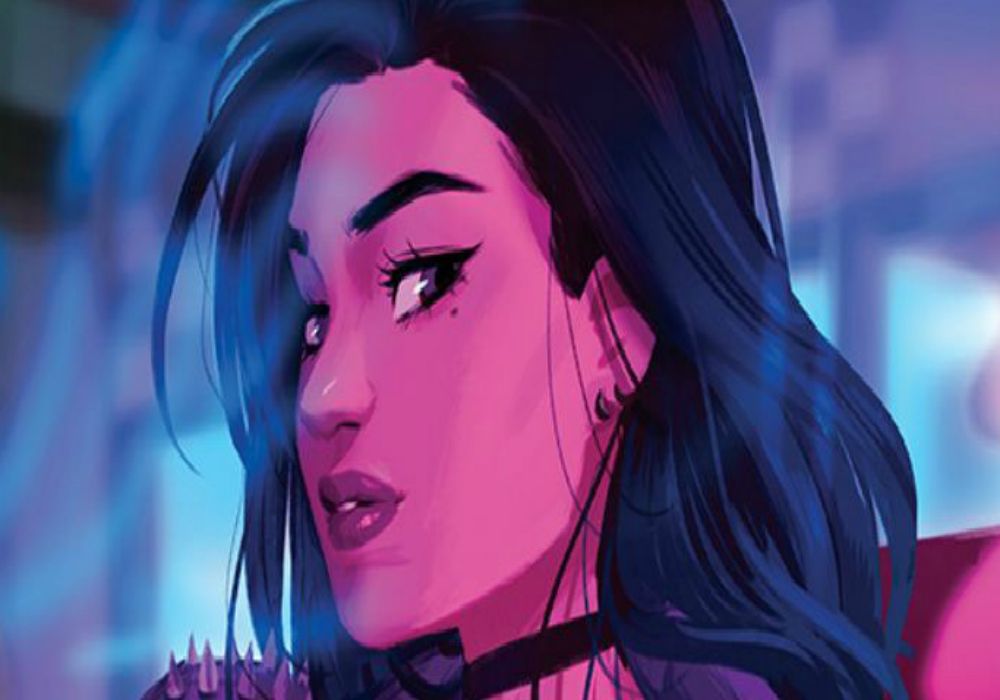 With the second issue of “Blackbird” we continue to learn about the magical realm of the Paragons and get more information on Nina’s family life. Some Spoilers Ahead. 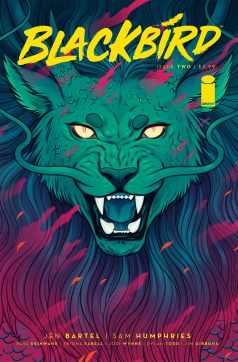 Cover by Jen Bartel
Written by Sam Humphries
Illustrated by Jen Bartel
Layout Designed by Paul Reinward
Colored by Triona Farrell
Lettered by Jodi Wynne
With her older sister Marisa kidnapped by the mysterious magical beast, Nina takes on the role of detective as she attempts to find out who that Paragon was, find a way into their world, and get help from her deadbeat dad.

After Marisa is taken, Nina tries to play hero by rescuing her sister and must battle her own demons along the way. She rushes home to speak with her father, Enrique, who, of course, doesn’t believe her. Her teenage obsession with magic and fantasy stories, along with her continuous mess-ups from her alcohol and pill abuse, leads to an immediate blow-up between them.

We start to learn that the two of them have the most in common out of the entire family as we see flashbacks of home life of years passed. A drinking problem and anger streak run through both Enrique and Nina. While attempting to stay sober during her hunt for Marisa, she considers washing down pills with whiskey, triggering a string of memories. Nina is still treated like the kid she always was. Her stroll down memory lane becomes equally frustrating to her quarrel with dear old dad. Though it was pretty clear from the start, she realizes she must take matters into her own hands if she is to save Marisa. Her combination of fear, anger, and sadness drives her on her mission; as well as some help(?) from her cat Sharpie, who should be dead by now and talks in odd riddle-like statements.

Sam Humphries begins to tackle quite a few story elements, that were briefly mentioned in the premiere issue. We get more of the big picture when it comes to Nina’s home life. Her mother was kind, but flawed, especially when it came to handling her relationship with Enrique. Her older sisters did not give her much support and picked apart her interests, as some older siblings tend to do, and her maternal grandmother was tough and judgmental. Nina never really fit in with them and her magical beliefs, and later drug use only estranged them further. Which makes her vindication that much more painful. Her path to drug use was partially the result of not being able to let go that magical beings existed. She began to believe she was crazy and turned to drugs to dull the pain. Upon finding that she was right all along, her world comes crashing down around her all at once. Being unable to process the truth in her own time, she now also has to find a way of rescuing Marisa.

We get some more glimpses of the other side where fantastic creatures exist and magical humans, “Paragons,” (they are not called wizards in this universe) rule. So far, it looks like they hang at bourgeois lounges all day, keep their hair and outfits perfect, and mess with mortals. So far, not impressive or likable in any way. Not one magical being has been kind or helpful to Nina. Though to be fair, she has not exactly stated clearly why she is trying to break into their realm. Towards the end of the issue we start to get into some more action oriented scenes and a mention of the book’s title “Blackbird.” Humphries is doing his best to give us some world building, continue the human narrative and keep some answers to himself. While he is doing a decent job of it, some of his pacing flounders as at times it feels like we are getting too much and not enough all at once; or we are getting answers to questions we didn’t even know to ask. There is evidence to suggest that the storytelling will become stronger and clearer as the series progresses, but right now it is still finding itself.

Jen Bartel continues to excel at creating a gorgeous world for Humphries to play in. Her clean, sharp line work is so beautiful that it feels like it just popped into existence rather than having gone through stages of creation. Her work is an interesting blend of smooth cartoon-like faces and page-popping detail. It give the whole book an other-worldly feel, which works wonderfully with the subject matter, but her detail work is so nice that anything else falls flat. Seeing the two styles next to each other makes me yearn for more of that sweet, sweet detailed line work.

Triona Farrell’s colors are outstanding and really go hand-in-hand with the illustrations. Having seen Bartel’s own talent for color in other works also proves that Farrell is a perfect choice for this book. Her work is so close to Bartel’s that if her name was not on the book I would have assumed it was all done by Bartel. Like a Lisa Frank for adults, everything has a beautiful neon look that leaps from the page and makes you wish more books were as brightly realized.

“Blackbird” #2 is still coming into its own and readers should look forward to what’s to come. The stellar art throughout makes for yet another issue that any fantasy fan won’t regret adding to their collection.

Final Verdict: 7.0, Continuing its strong premiere, the gorgeous “Blackbird” #2 plays a narrative tug-of-war with itself with how much the reader should know.