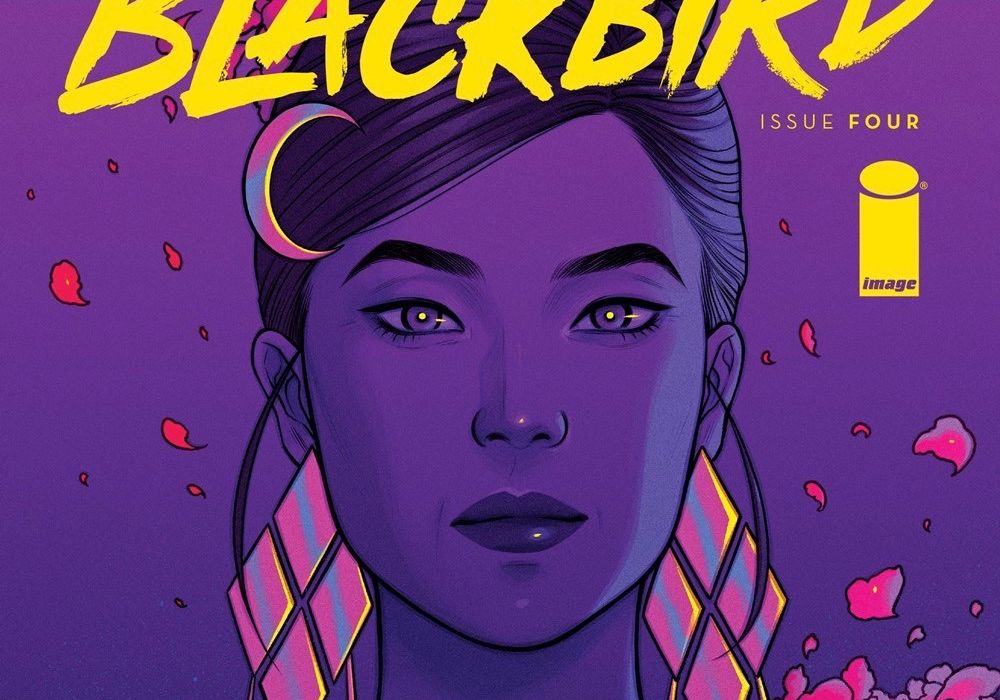 “Blackbird” #4 ups the ante, combining spectacular artwork with a story that suddenly feels more vital, giving the series major momentum as it heads toward the conclusion of its first arc. (Warning: contains minor spoilers.) 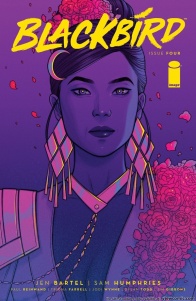 Between pulling back the veil on the magic underground and learning shocking secrets from the past, Nina can’t even right now. Also, she’s terrible at flirting, and that’s getting in the way of making out with Clint.

Frankly, up until “Blackbird” #4 I’ve been intrigued by the series, but not exactly blown away. Don’t get me wrong, from the very beginning illustrator Jen Bartel’s inks and colorist Triona Farrell’s colors have been nothing short of amazing. The story, on the other hand, has often felt a bit rote and more than a tad derivative. Happily, with issue number four, the story suddenly feels more vital, raising the book to new heights and creating a more complete, satisfying experience. Without question, the artwork is still the book’s major strength, but now the story feels more worthy.

Narratively, co-creators Bartel and writer Sam Humphries up the ante right away, delivering an emotional gut punch on page two. Structurally, it’s a clinic. After a moody and raw four-panel dream sequence on the first page, the wordless second page cuts to the present, revealing an incredible full-page spread that tells us more in one simple image than pages of exposition and heartfelt dialogue ever could. From that moment forward, the book takes off. There’s a palpable sense of change and somehow it’s crystal clear that for the protagonist Nina there is no more looking back. She’s been dwelling in the past, trying to piece things together and make sense of it all, but that dynamic is finished. From here on out the past doesn’t matter. There is only the present and future.

To be clear, there’s not a lot of overt drama. Despite the book’s fixation of territories and factions – as well as resources, in the form of gems – there are no physical battle scenes that pit one incredibly good looking, statuesque wizard against another in pyrotechnic combat. I imagine that’s likely coming in future installments, but so far it’s a battle of wills. At this point, the conflict is purely psychological, full of emotional fireworks. It feels like a wise choice, since we will be more emotionally invested in the characters before the sparks actually fly.

Bartel’s illustrations, pages and paneling are outstanding, but Farrel’s colors are next level. Her use and control of light, in particular, is remarkable. In the graveyard, for example, the distant sky glows an eerie blood red, faint yet formidable, like an unseen smoldering fire that burns incessantly just over the horizon. Throughout much of the rest of the book, yellows in the key characters’ wardrobe literally glow, blooming with a soft golden light that feels like simmering cauldron of untold magic power bubbling just under the surface. In fact, near the end of the issue, a swirling vortex of yellow and black that emanates from Nina’s hand catalyzes the final sequence in which Nina declares, “I’m here to claim my birthright,” and demands to speak to her mother.

Given the book’s glitzy look and feel, it’s certainly no coincidence that the story is set in L.A. Much like the gods and goddesses in “The Wicked + The Divine,” the paragons (sorcerers) in “Blackbird” would definitely look more at home sipping Fiji water on the red carpet in front of the Beverly Hilton than they would riding Shadowfax through the rolling hills of the Shire. I don’t think any of them literally have Instagram accounts, but they definitely should. Just look at the stunning selfies that are each of the series’ first four covers.

Bringing it all back home, “Blackbird” #4 is a tightly structured visual feast that perfectly sets up the first arc’s conclusion. Yes, there’s still a bit of an over-reliance on traditional urban fantasy tropes – specifically, the unseen world of magic that surrounds us and slowly becomes visible to the book’s protagonist as she pieces together her legacy – but Nina’s characterization supercedes this weakness. At this point, we’re fully invested. Finally, we really care. We’re rooting for the heroine and want to watch her kick some ass. For whatever reason, she’s been dealt a crappy hand, but she’s done feeling sorry about that and ready to take matters into her own hands. Nina has arrived. This is her coming out party and everyone else had better get ready.

Final Verdict: 8.7 In “Blackbird” #4, rock solid structure, outstanding characterization of the book’s protagonist and consistently incredible artwork combine to deliver an issue worthy of the series’ potential, perfectly setting up the climax of the first arc in the process.