‘The Death of Sleep’ remains interesting for Bloodborne players and non-players alike. 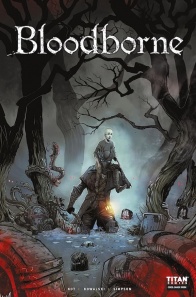 Awakening in an ancient city plagued by a twisted endemic – where horrific beasts stalk the shadows and the streets run slick with the blood of the damned – a nameless hunter embarks on a dangerous quest in search of paleblood.

“Bloodborne” is, as with the prior issue, an anomaly amongst video game tie-in properties. Rare indeed is it a tie-in comic book can be so steeped in references to the source media, yet accessible enough for newcomers. The fact both can coexist is a testament to Aleš Kot’s writing.

Following up from the previous issue, Kot continues to show his wealth of knowledge concerning the goings on around Yharnam. From Iosefka to Eileen (the Crow), from the paleblood to consumable items, to even the entity that guards the Hunter’s Dream, few stones are left unturned, and there are likely more cameos to come. However, rather than just be a tour of the world for fan service’s sake (no, not that kind), every cameo has a defined purpose and acts to move the story forward in its own way.

On the side of the subtle, we have certain parts of images alone, bereft of dialogue. Fans of the game are likely to pick up on the subtle nods to pieces of the nameless, androgynous Hunter’s history, such as the Caryll Rune of the “Hunter” Covenant (run by the aforementioned Eileen the Crow) on the first page, perhaps indicating the overall role of this Hunter in the society around them in Yharnam.

On the more overt side of things, we have the use of Beasts and men, and the implications of an underlying eldritch horror that wouldn’t be out of place in the likes of H.P. Lovecraft’s Innsmouth. Kot uses the paleblood child to demonstrate the connection between Beast and Kin, with the small nods to the child’s power emphasized by how calm and quiet this child usually remains, especially in contrast to the kindness and pragmatism of Iosefka and the internal conflicts and overall stoicism of the Hunter. This look in on the eldritch elements continues into the Hunter’s Dream, especially with regards to the two-pronged dialogue between Gehrman and the Hunter as the former tried to keep knowledge hidden from a more or less unknowable entity up above.

Most interesting of all is the way in which Kot creates a characterization for this nameless, androgynous Hunter. The narrative slips in and out of focus on the Hunter’s part, with internal monologue drifting into muttered speech and back again, as if trying to rationalize what it going on between the unknown number of dream cycles this Hunter has gone through. The continued cycles and differences in knowledge is also continued with the Hunter’s familiarity with Iosefka, whereas the reverse is not true at all, making this macabre take on a Groundhog Day loop all the more intriguing.

Most unusual is the way in which Kot uses the venom during one attack to muddle the Hunter’s thoughts to the point of two distinct, interlocked speeches, showing how the nightmares of Yharnam can make the common mind go progressively mad. After all, the game itself delves deeply into the idea of insanity compared to both intellect and feral behaviors, so why not bring in more of the crazed behaviors and thoughts?

Piotr Kowalski, a Titan Comics veteran, continues to show how well he can handle horrific scenes with his artwork. Much like his work on “Wolfenstein: The Deep,” the use of light and darkness plays a big part in showcasing a foreboding atmosphere. From the Beasts to the emerging Kin, from the mortal to the possibly ageless, his use of visceral artwork, with copious use of blood where necessary, allows for an unending sense of underlying dread. Furthermore, the liberal use of blank black panels gives an impression of something lurking just under the shadows, reminding readers to “fear the old blood” even as the words are not outright stated.

Kowalski’s work on faces is particularly notable in this issue. With the completely emotionless face of the paleblood child, a sense of the inhuman is definitely given off. On the other hand, the varied facial expressions of Gehrman, from a calm smile to a barely restrained face of fear, help to showcase his personality and conflicts perhaps even more than the source game. Most important, however, is the structure of the Hunter’s head. With short hair, a body type that makes any bulging or differences in muscles difficult to discern, and basic facial structure, Kowalski is able to emphasize this Hunter’s androgyny, making Iosefka’s confusion over gender be all the more relevant, and reducing any question over the gender of our protagonist to a nonissue.

Brad Simpson’s coloring is definitely something to praise as well. Splashes of red contrast against ones that are simply stained on clothes, dark blues and browns color a dismal landscape, contrasting severely against the fires of a burning city. The pale skin and white hair of Gehrman shows a sense of comfort in the elderly, while the same paleness in the paleblood child gives a grim reminder of how inhuman the child potentially is (after all, the Hunter even calls the child an “it”). Most notably, the interior of Iosefka’s clinic, especially when the Blood-Starved Beast comes in, uses browns, dark purples, and other red shades to give the impression of rot and disease, definitely giving a sense of the Victorian medicine already implied for Yharnam itself, and contrasted against the warmer orange lights in other areas of the same clinic where Iosefka is able to provide reprieve from the violence.

The workings of the story, from the art to the writing to the colors and much more, make for an interesting story that works for players and non-players alike.

Final Verdict: 8.0– Creepy artwork and a fast-paced story help the tour of the world of Bloodborne feel fun, rather than daunting or excluding non-players.