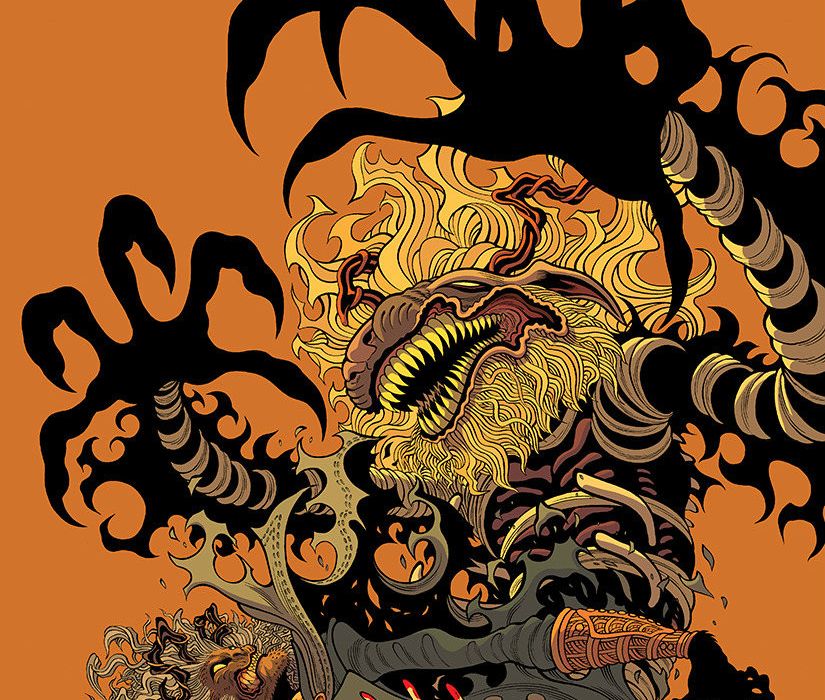 Aleš Kot and Piotr Kowalski’s first “Bloodborne” series was one of the rare few video game adaptations that felt genuinely thrilling. After taking a few months to break, the team is back for round two in their new story. Does this series continue to shine with this arc? 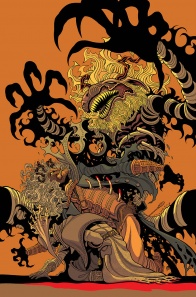 The horror and mystery continue in Bloodborne, the comic based on FromSoftware’s critically acclaimed video game hit! Now an ongoing series, by popular demand! The Hunter delves into the dark underbelly of the Healing Church, as writer Aleš Kot (Zero, Wolf, Generation Gone, Days of Hate) returns to the blood-soaked streets of Yharnam with artist Piotr Kowalski (Dark Tower, Sex, Robocop)!

As with every good Souls-inspired property, there’s lack of a true moral compass within these characters. Kot introduces us to the healer, Alfredius, in the begin of the story, and he does seem to be the most altruistic of anyone we’ve seen so far. Indeed, we do see him as the main driving force of the story, being the focus of attention for most of the content throughout. However, Kot ensures there’s always a nagging doubt in these characters. With Alfredius, it’s within the dialogue. Whenever the character talks about his “dearest” Mathilde, we get a sense that this desire is a little abstract and that Alfredius may be driven mad by a loss. Similarly, when we’re shown the Priest Clement, our first reaction to his character is a negative one, as he participates in a blood ritual, and this thought lingers on throughout the rest of our time with him. It’s clever characterization through implication, and Kot handles it well.

What I’m a little more mixed on is the choice to divide this story between script and dialogue, and these album-like journal entries. For the first half of the book, we get introductions to Alfredius and Clement well, with a fairly quickly paced plot to keep the ball rolling and evoke a tone similar to the game. However, once we get to the first of these on roughly the twelfth page of the story, the way that it is set out forces the reader to slow right down. It can be a little immersion breaking, considering its such a contrast in pace change, and it doesn’t help that it does this for the next eight or so pages, having this take up nearly half the story. However, Kot does at least use the space to really get inside the heads of his characters, to voice his insecurities and fears. In a way, it’s reminiscent of when you found a journal in the original game or read a passage of a loading screen, allowing you to delve deeper into a certain aspect of the world and take a break from the non-stop fast pace of the game. The intent is there, and it serves a purpose, I just wish it wasn’t executed in such a jarring manner.

Kowalski proves he’s still more than capable of holding up the art department with this issue. From the start, we’re reminded of his mixture of a Victorian painting with modern comic sensibilities, with Kowalski’s art using cross-hatching tastefully enough in certain scenes to evoke this. However, this type of shading also mixes with a looser, more ink heavy line shading, which looks more akin to an impressionistic painting than anything else, making the comic feel stylized graphically like the video game. Kowalski also gets a lot of opportunities to play with cinematic camera angles and powerful scenery here. The very first scene is one of the best examples of this, with the camera opening through a giant, ornate metal gate to behold the world of Yharnam from a crouching angle, in order to best show it’s towering spires and troubled skies. Later on, the scene depicting Alfredius standing at the bridge at his place, with the camera sweeping through a landscape look at the scene, showing the intricacies like weeping statues atop the bridge’s edges. The next page is a fantastic, menacing look at the Cathedral gate below the bridge, with all the architecture and scenery pointing towards the focal at the center, creating a scene of terrifying symmetry.

In terms of having the journal entries, although it does slow down the pace, it does give Kowalski an interesting opportunity to convey feelings and moods without having the dialogue directly connected to his art. The sequence seems to work as a nice growing crescendo of tension, with both Alfredius and Priest Clement both looking suspiciously at the environment around them, both tossing and turning in their sleep and both becoming more at odds with their situation and the state of the world. It works best for me when we see Clement staring rather blankly at the beast-mutilated corpse lying in front of him. Kowalski gives Clement not a revulsed look, but more of an annoyed look, which shows more his worry and concern at why the world is presenting him situations like this.

The sequence in which we are first introduced to Clement is visually intuitive and satisfying to watch unfold and reread. Kowalski uses the already highly significant moon as a metaphor for the swinging blade in the Healing Church before a doomed man. The next page, we see Clement watching the scene before he’s splattered with blood. We’re later shown an image of the blade embedded in the doomed man, implying that it was his blood that splattered off-screen onto Clement. It’s a clever scene that works well with Kot’s dialogue to create a tense mood.

Brad Simpson’s colors here are vibrant and moody, yet never feel out of place. It’s a great exercise in showing that a grim and dark tone can be conveyed without resorting to monochromatic or desaturated palettes. Simpson uses great overlays of deep, sea turquoise throughout scenes to give the sense of etherealism and an unpleasantness with the air. Simpson also bathes Alfredius’ place of power in a calming, blue moonlight, which somehow manages to feel offputting and sinister merely because it’s used in a comic of such menacing tone. Opposing this side of the spectrum, Simpson uses a set of aggressive reds and yellows in the journal entry of Clement facing the mutilated corpse. It gives off a very primal and violent mood, which matches the scene perfectly and stands out amongst the other scenes.

“Bloodborne” #5 comes back with a new set of characters and setting to keep readers invested in the larger world. Kot establishes the two characters Alfredius and Priest Clement well, but the pacing can feel a little jarring at times. Kowalski, however, brings his A-game, delivering cinematic setting work and clever multiple-page sequences. It doesn’t quite hit the heights of the first story arc, but it still remains ahead of the pack.

Final Score: 7.0 – A solid return to form, “Bloodborne” #5 can be a little jarring with pacing, but introduces complex new characters and delivers beautiful, Victorian-influenced artwork.