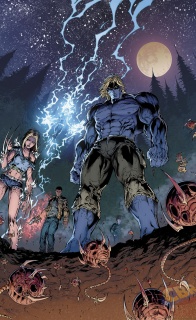 When a meteor crashes to Earth, bringing with it an unspeakable alien presence that terrorizes a nearby small town, the lucky ones die first. As for the rest, they find themselves locked in a hellish struggle for control of their bodies and their minds. This isn’t just an invasion. It’s an infestation. What would you do if the greatest threat to humanity was hidden away inside you?
Award-winning writer J.T. Krul (Teen Titans, Green Arrow, Jirni) and superstar-in-the-making V. Ken Marion (All New Soulfire, Jirni) bring you their dark and horrifying science-fiction epic about tortured souls who are cursed to a fate worse than death…much worse.

The history of comic books is a history filled with happy accidents. One of the happiest accidents was the early 90s crossover, “Bloodlines” from DC. “Bloodlines” was an attempt to bring some new characters into the DC Universe by introducing a species of alien that attacked peoples’ blood and gave them super powers. These powers were often the most 90s thing possible, like Gunfire for example. Gunfire was a guy who could turn anything into a gun. That staple he picked up? It’s a gun now. That Beanie Baby? Gun. His own ass? He turned it into a hand grenade and that’s how the DC One Million version of him died (not a joke). The only character to really have a series that endured was Hitman, an assassin from Gotham’s Irish neighborhood who did not give a crap that he had telepathy and X-Ray vision. The only successful character from DC’s first attempt at “Bloodlines” was a character who did not care that he had powers because he was too busy shooting people. Did I mention Hitman was from a Garth Ennis comic?

So, it’s surprising that DC would greenlight another “Bloodlines” series, especially after its first series barely accomplished its goal of creating new characters. This 2016 version of “Bloodlines” from JT Krul and V. Ken Marion isn’t as anachronistically abrasive as its 90s counterpart, but turns out to be senseless in its own modern way.

“Bloodlines” #1 is structured in a way to introduce you to everyone who is going to get superpowers during this series without making you care about any of them. Most of the screen time is dedicated to Eddie, a disabled high school student who mopes his way through life. One of the early scenes in the book is his mother rushing to work, asking him to eat something healthy for breakfast and reminding her son she loves him as she heads out the door. Eddie tragically says “Love you too” alone to himself and solidifies his role as my favorite and least favorite character at the same time.

Eddie’s unceasing sense of misery hovers over the rest of the comic as we encounter other potential Bloodheroes or whatever they’re going to be called though his eyes. Eddie spots the young smart kid and but overshadows his debut by talking about how much he hates himself. Aside from the one small smart kid, anyone else in Eddie’s high school who might be one of Eddie’s future teammates acts less like a real character and more like window dressing to Eddie’s ongoing Morrissey tribute act, like the football jocks talking about the girls who talk about their classmates posting “pics” of themselves prom dress shopping. “We’re talking before, after, and during!” one Jock says, implying that high school girls took pictures of themselves going to the mall, in their new prom dresses, and in the process of trying clothes on in the dressing room and that he masturbated to all the stages of this process.

If that doesn’t sound like something actual teenagers do, wait until one student asks how “C.F.A” these girls can get. “What’s C.F.A.?”, a jock asks. “Cry For Attention”, the student replies, proud of her impractical and poorly placed acronym. Cry for attention may be what C.F.A. stands for in the DC Universe, but in the real world C.F.A. doesn’t stand for a fucking thing. I can’t tell what’s less likely, that a student would say a tedious acronym like that in real life or that they would spell it with periods. What I’m getting at is, “Bloodlines” doesn’t do a great job of sounding like a book with authentic characters. Especially DANA who is always walking around taking videos of herself for her “Senior Year Blogapalooza.” First of all, and I cannot believe I am this petty, it wouldn’t be a Blogapalooza, a web series would be a Vlogpalooza. Second of all, she keeps complaining about how the Jane Austen novel she’s reading in class doesn’t have bows and arrows, so I hope her character arc ends with her uploading her Vlogapalooza to YouTube, watching the trailer for Pride & Prejudice & Zombies, and fading out of existence.

“Bloodlines” #1 also has a couple of other characters outside of the school who have inexplicable one page introductions. There’s a female mechanic fixing up a car and a cop who begins his interactions with everyone by threatening to break their teeth. They aren’t really tied into anything else going on in the comic, they’re just there to remind you they’ll show up in another issue. There’s also a mother going to the mall with her daughter when she stops at a gas station. While she’s fueling her car, a creepy man leers at her bending over from the shop window. The one page doesn’t make it clear who is going to get blood powers, but a sick side of me hopes it’s the guy at the window and that he somehow becomes the book’s protagonist. Maybe “Bloodlines” is just Bueno Excellente’s secret origin.

Aside from that, there’s not much else to say. Eddie’s bro, Graham, takes him to one of those high school parties in the woods from Charles Burns’s Black Hole until deer, infected with the Bloodlines parasite, slaughter a bunch of people. Eddie turns into a blue Hulk (???) and at this point I don’t have enough energy to get into the sociopolitical implications of another disabled character who gets super powers that “fix” them. Graham dies in Eddie’s arms, and we’re left with one miserable bastard who has only gotten more miserable for our team, along with a few miscellaneous characters whose backgrounds we still have to get to.

In case you haven’t been able to tell, I’m not a huge fan of “Bloodlines” #1. The narrative structure is way off for a #1 issue that’s meant to get us new readers interested in this new batch of characters. Instead of showing what makes them likable, there’s just a few one-page vignettes that either make the characters come off as annoying, corrupt, or nothing. And Eddie, the hero witht the most screen time, spends most of this issue complaining about people who are, by all accounts, pretty nice to him. There’s no reason to care about any of the characters in this book, save for that dude who might be Bueno Excellente from Hitman.

Granted, there’s a lot of places this comic could go, but I’m not totally convinced it will live up to its potential. The idea of alien parasites invading sounds like a cool perspective to frame a new “Bloodlines” story from, but I could also just go read or watch Parasyte again. If you take one thing away from this review, it’s that Parasyte is super worth your time.

Final Verdict: 3.5 – The first issue of “Bloodlines” really doesn’t offer anything that makes you want to hold on for issues. Anything novel I can say about “Bloodlines” has also been done elsewhere and better. If you want any further thoughts from me on this comic, I’ll be uploading another review to my Vlogapalooza.