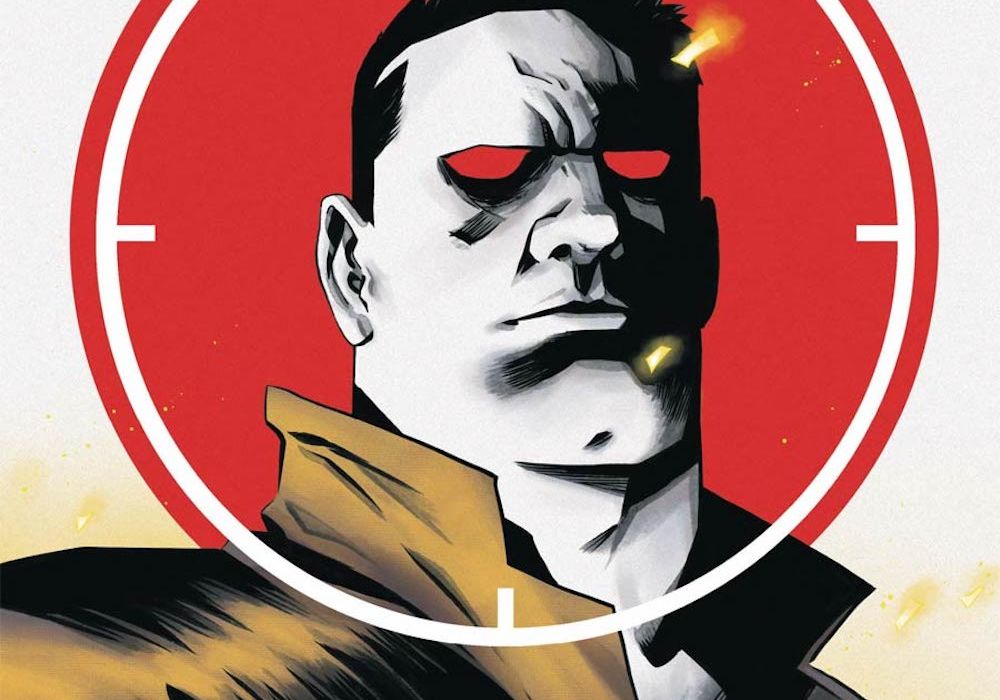 The BLACK BAR may be present, but there is no censoring this newest installment to the “Bloodshot” side of the Valiant universe. 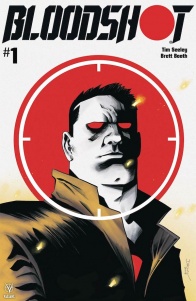 Bloodshot is back with a few new thrilling tricks up his sleeve!

No amount of high-octane explosions can keep Bloodshot from completing his new mission.

Who is the mysterious BLACK BAR, and what do they want with Bloodshot?

When it comes to Bloodshot, the concept itself feels steeped in the Dark Age of Comic Books. A nanotechnology-enhanced gunslinger with pale skin and red eyes doesn’t appear to have a lot going for it beyond rampant violence, and a gore-infused name like “Bloodshot” doesn’t help much either. However, as has been seen before for both this franchise and its latest writer, Tim Seeley’s second foray into the character’s tale proves that one should not judge a book by its cover, nor by its title.

Seeley is no stranger to Bloodshot, having written the character in the Free Comic Book Day 2019 Special. As a seasoned writer in a multitude of rather violent genres, he puts an interesting spin on the concept for the new volume. Rather than rely solely on action, Seeley takes a slower, more thoughtful route for “Bloodshot” #1, not dissimilar from his work on “Revival” at Image Comics. The introduction of BLACK BAR and its apparent leader each have an air of intrigue common to thrillers, especially in political and military frameworks, wrapped into the straightforward action elsewhere in the book. The behavior of global leaders and the presentation by the aforementioned apparent head of the latest anti-Bloodshot organization form a compelling framing device around which the actions of the series’s eponymous character can be examined from the perspective of those less knowledgeable.

That said, the meat of “Bloodshot” #1 is used showing off the protagonist’s abilities and personality. Plenty of space is used showing off the various nanite-based skills against a group of military style assailants, from his strength, speed, and durability, and healing to his more subtle skills like disguise, all of which, and more, are explained from BLACK BAR’s admittedly biased perspective toward the end for newcomers.

In terms of personality, Seeley illustrates both Bloodshot’s compassion to those less fortunate than himself and the sheer terror he instills in those he hunts. The fact that Bloodshot is introduced saving a caravan of poor people demonstrates his humanity under his not insignificant skill and ability to cause massive damage. On the other had, some elements of the introduction feel like something out of the likes of the horror classic of a victim’s perspective on deaths, particularly Predator or Terminator film franchises, only with the unstoppable killer being the hero instead. The effect is most prominent around the one assailant who has a significant lisp on account of a facial injury, where his actions, as monstrous as they may be, are balanced against the relatively humorous way of speaking, which is best understood by reading the words aloud.

Between the heroic (though very violent) actions of Bloodshot and the presentation provided to various leaders of the world’s governments, Seeley’s script for this “Bloodshot” series seems to be split between two perspectives: the villains, specifically BLACK BAR and the governments they convinced; and Bloodshot himself. The governments have some reasons to trust the new group, considering the potential dangers of a rogue element like Bloodshot as demonstrated in 2017’s “Bloodshot U.S.A.” and elsewhere, but our hero’s apparent nobility rises above any of that, leading to an interesting dichotomy between the calm and the violent, between the subtle and the brash.

Brett Booth provides excellently visceral artwork for “Bloodshot” #1, both in combat and out. The raw emotion helps to show the realities of life around Bloodshot as much as it makes clear how borderline alien those without any outward demonstration of an emotional connection to violence can seem. Every hit, whether to the physical body or the emotional heart, is thereby all the more tangible.

In the framing scenes, the emphasis on detailed facial expressions draws special focus on the Prime Minister’s indignation at being left out, then abject terror and confusion throughout the proceedings of the briefing by BLACK BAR. At the same time, the shadowed eyes and calm face by our apparent primary antagonist show his dispassion and mysterious, likely villainous aims.

In the more violent scenes revolving around Bloodshot himself, the detail serves a different purpose. The terror on the faces of the woman and child shows how monstrous the assailants are, especially considering their “just business” attitude toward everything, and Bloodshot’s kindness and compassion in how he would help them and admit they have troubles far worse than him. By contrast, the anguish on one soldier’s face demonstrates rare humanity in the antagonists.

Andrew Dalhouse is no stranger to “Bloodshot,” not to rather violent comics by Tim Seeley, having done work on “Bloodshot” comics for years as far back as 2015, and “Hack/Slash” as far back as 2006. As such, he is a master of coloring the work, giving an extremely heightened emotional response in dark shadows or bright, almost hostile lights. The most effective use of color comes in BLACK BAR’s presentation, where the harsh red lights give an added distressing sense of violence, especially when paired with the Prime Minister’s horrified facial expressions in the assumed background.

Final Verdict: 7.5– A very solid debut that has a lot of potential.