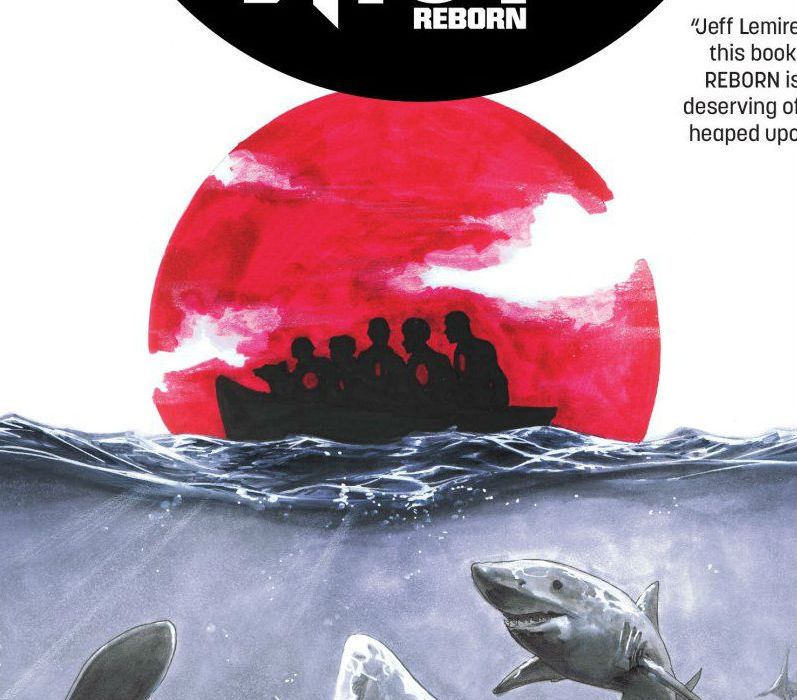 Project Rising Spirit is beginning the next phase of their plan and Ray Garrison is stuck on a raft in the middle of the Pacific thousands of miles away with several other former Bloodshots. One last issue before “Bloodshot U.S.A.” hits. How is it? Let’s find out. 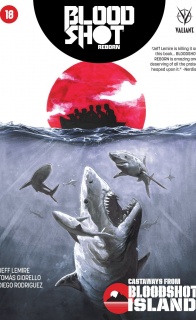 BLOODSHOT ISLAND sails into the sunset with a sanguine-stained epilogue! Ray Garrison and a battered team of survivors have made their escape from BLOODSHOT ISLAND…only to drift straight into shark-infested waters! Marooned in the middle of the Pacific Ocean with no defenses except the relentless will to survive, will the highly trained team of killers aboard this life raft band together…or throw each other to the prehistoric predators below? And, if they don’t kill each other first, will mother nature finish the job?” With “BLOODSHOT USA” on the horizon, it’s time to sink or swim as New York Times best-selling writer Jeff Lemire (Moon Knight) and rising star Tomas Giorello (Batman & Robin) toss Valiant’s band of nanite-fueled soldiers into the deep end!

For eighteen issues, Jeff Lemire (and artists Suayan, Guice & Larosa) have crafted a tale of identity and violence all with the backdrop of an action-sci-fi thriller. While the story will fully culminate with the upcoming “Bloodshot U.S.A.” mini-series, Lemire and artist Tomas Giorello get to slow down a bit with an epilogue to the harrowing events of “Bloodshot Island” by delving into the minds of the other Bloodshots that were discovered as test subjects on the island, all the while Ray is trying to muster his resolve in order to stop Project Rising Spirit from unleashing a catastrophe on Manhattan, try and bring Deathmate to an end and save Magic.

Let’s get the good out of the way first: I am really glad that Tomas Giorello seems to be staying around Valiant for the time being. His art here (with colorists Diego Rodriguez and Andrew Dalhouse) provide a nice somber atmosphere, fitting for being stranded on a raft in the middle of the Pacific, as well as some of the very depressing backgrounds the other Bloodshot characters have. It’s one shade less photorealistic art than someone like Mico Suayan, so it also allows for a more graceful movement when it comes to the blood-soaked action that radiates throughout each of the Bloodshots’ sordid pasts.

And of course, the pencil work is nothing without the tone that colorists bring. I talked about the art being somber, and that’s in big part to Rodriguez and Dalhouse managing to maintain that emotion while also having to depict some more scenic and vibrant places like the oceans or the jungles. There’s a lot of “magic hour” going on, something that is present in the variety of places in the past and does help set up a kind of thematic visual, almost hinting at the upcoming fate of our dear Ray. I don’t know if that was intentional, but it’s still a nice effect.

So if I liked the art, why am I just giving it an “okay”? Well, through process of elimination, it’s the writing.

To put simply, this is just basic attempts to create character histories. Now, part of that may be a matter of space. Lemire is trying to tell the stories of (at minimal) three different Bloodshots on this raft, the WWII one, the Vietnam one, and the Soviet one, while also trying to tie in thematically with each of the historical eras. In 20 pages. To put it simply, there’s no way you really can’t to do all of that while also bringing it back around to our protagonist and it all be a filling read. I can appreciate Lemire’s attempt, but these backgrounds, with the kinda exception of the Soviet Bloodshot, feel very “been there, done that” because we get such minimal information.

Each of the Bloodshots feel like they have potential for further depth, but there’s very minimal exploration here. You have the WWII Bloodshot who volunteered for the procedure and hold a soldier’s honor in high regard. You have the black Vietnam Bloodshot who was basically used by the U.S. Government with the dangling carrot of being turned back to normal, and bringing up the seriously screwed up things that the government and military has done to black people (even directly referencing the Tuskegee Experiments. Go look it up. It’s very fucked up.). Then you have the Soviet Bloodshot who also volunteered for the procedure, but there is a bit of a twist that I will not spoil, but there is some slight to it.

There’s nothing wrong with any of these backgrounds. They all bring up some very important and very relevant topics. But the big problem is that’s all they do: bring up. There’s very little in terms of exploration due to overcrowding. It’s bare bones character work and that’s a good start, but this is the last issue of the series as of now (even if “Bloodshot U.S.A. #1” should really just be “Bloodshot Reborn #19” but that’s an argument for another day) and I can’t eat bones!

Now, let me talk about something that has bugged for a while and it finally culminates with this issue: Ray and Magic.

Back in the second arc, I talked about how Ray and Magic’s relationship and how much Ray “loves” Magic felt out of nowhere and more shallow than a thimble of scotch. Now that we are at issue #18… yeah that really hasn’t changed much. To put it simply: I do not believe for one single moment that these two are in love or whatnot. Honestly, “rescuing Magic” being a major part of Ray’s motivation feels like the beginning of a really crappy video game. The video game begins with “This is your wife (because 99% of the time it’s a woman). She has been kidnapped/killed. You must now rescue/avenge here because you love because we say you do.” LIke the above with the Bloodshot stories it’s kinda shallow and maybe if there had been some depth to their relationship built over this series, I could dig it a bit.

Final Verdict: 5.3 – Some nice art doesn’t save from a simultaneously cramped and shallow narrative.