“Bloodshot: Rising Spirit” #1 spurs plenty of questions, but not about the series. 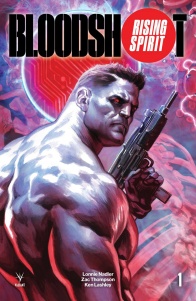 Story by Zac Thompson and Lonnie Nadler
Script by Kevin Grevioux
Laid out by Ken Lashley
Finished by Ryan Winn with Brian Thies and Oliver Borges
Colored by Diego Rodriguez
Lettered by Simon Bowland
NEW ONGOING SERIES! DISCOVER THE TRUE ORIGIN OF VALIANT’S MOST UNRELENTING HERO!
Before a weapon is deployed in battle, it must be designed, refined, field-tested. Bloodshot was no exception.
In the early days of the private military contractor Project Rising Spirit, the nanite-infused super-soldier who would one day become their most violent and valuable asset was a resource to be mined – and it was up to one enterprising employee, the Memory Weaver, to ensure he did what he was told. But memory is a tricky thing…and the man Bloodshot used to be won’t let go of his past so easily…
Critically acclaimed writing duo Lonnie Nadler and Zac Thompson (Cable) team up with distinguished artist Ken Lashley (Black Panther) to open a door once closed and reveal answers to questions that Bloodshot himself would never think to ask!

Valiant has kept its overall publishing line small, about 10 or so books a month, and annually churns through that line. A rare constant through this latest incarnation of Valiant has been the “Bloodshot” franchise, which Jeff Lemire recently finished a years long run on in August. Cape comics are a never ending battle that thrive on reinvention to stay fresh, but sometimes for these properties and readers, a break could be more meaningful than another run on the treadmill as “Bloodshot: Rising Spirt” #1 shows. The credits for this book look like a mess, partly due to Underworld creator Kevin Grevioux coming onto the book late in the process, but the first issue is too consistent to be “bad.” Conversely, it is never good enough to be “good” either as it tells a story very similar to one the franchise already has. Lacking in quality to be either truly good or bad, “Bloodshot: Rising Spirit” #1 finds itself in the worst of liminal positions: boring. Nothing about this first issue, despite some novelty, inspired great feelings or intrigue to continue with the series. Lemire’s excellent run ended three months ago, maybe giving this property a rest instead of getting on that treadmill again would’ve been a better idea.

The concept of “Rising Spirit” is that it will tell the secret true history of the shadowy weapons contractor Project Rising Spirit. Now comics retelling or finding the secret history of a thing is a staple, but the manner in which this first issue does this is an uninspired copy of ground and ideas covered in “Bloodshot” #0 from 2013 written by Matt Kindt with art by Chris Cross. Ray Garrison wasn’t the first person turned into the pale killing machine known as Bloodshot, both “Rising Spirit” #1 and “Bloodshot” #0 follow earlier test subject in the program from differing perspectives and to differing degrees of success.

There is some novelty to “Rising Spirit” #1 as it introduces an updated version of mafia hitman Angelo Mortalli, who was the original Bloodshot during Valiant’s 90s incarnation and the name used in the upcoming Bloodshot movie. However, the writing doesn’t turn Mortalli into a multi-dimensional character and instead renders him an Italian American stereotype. Grevioux is credited with script, and his dialog for Mortalli reads like a parody of dialog from Goodfellas. I’m half surprised there wasn’t any “fuhgeddaboudit” business. With Mortalli being our way into the series, this surface level view of his inner thoughts through internal monologue is a missed opportunity. The art in this book doesn’t add much dimension to the character as it rushes through everything. It is worth noting that the transformation process doesn’t magically turn Mortalli into pale Arnold Schwarzenegger like Ray Garrison, he’s leaner and more like a welterweight MMA fighter.

At the heart of the “Bloodshot” franchise is the sanctity of self, and the ruthless, inhuman, acts Project Rising Spirit goes through to achieve its goals. “Bloodshot” #0 understood this by shifting perspective to one of the lead scientists on the project as they worked over their latest anonymous victim-subject, an African American solider serving in the Middle East. It highlighted the moral and ethical lapses that allowed this to happen as the doctor grappled with his faith. That level of craft doesn’t exist in “Rising Spirit” #1.

The use of that perspective also gave the hyperviolence in the issue purpose. “Rising Spirit” plays everything oddly straight, which the franchise hasn’t really done before. The first “Bloodshot” series was an action heavy book, but the creative teams understood the “Deadpool” like body humor-horror the property allowed and leaned into it at times. One beat in “Rising Spirit” that would’ve made a good punchline, Mortalli spitting up all the literal bullets he just ate isn’t played up at all. His bullet vomit is a tiny pair of vertical panels that give no comedic or excessive emphasis to this act only showing 5 of the hundred he just consumed. The two panels are merely used as transition points to get to the final panel and next page.

That understated quality is born from the fact that the art is blandly competent. “Bloodshot” #0 used mixed media and differences in lettering to create this history and perspective and tell a story. “Rising Spirit” has bland page design that is not technically wrong but isn’t an interesting read or effective storytelling mechanism either. It likely isn’t a good thing that the very first page is probably the best overall one in the issue, it’s also one of maybe three that it looks like Ken Lashely did all the way. The first page deals with Mortalli’s setup before a mob hit that’ll make him a made man. The reading line for the page make a nice decline, foreshadowing Mortalli’s prospects, it’s one of two pages where some lively craft comes through. The rest of the book, aesthetically, reads like this minimalist idea of the nineties. Figures cut good profiles and environmental designs look of the era, they just lack all the excessive little line work and over the top detail that made that art style. Everything about it is artistically hemmed in and safe. There aren’t any real storytelling chances taken in this issue. When things eventually turn into something of a Frankenstein’s Monster spree it sort of gestures at horror, but the sequence is both too short and not really horrifying despite the use of blood and “gritty detail.”

“Rising Spirit” #1 isn’t a “bad” comic, technically there isn’t major narrative or artistic failures it just reads as underdeveloped and safe. The shift in art styles at a couple moments makes me wish Ken Lashley had done everything, but that’s true of pretty much any book Lashely does where he has others filling in. My determination is more of a philosophical one that bad takes effort and commitment to trying something and failing. “Rising Spirit” #1 lacks that spirit, and becomes the Justice League of “Bloodshot” comics in the process. If this is what they’re replacing the Lemire run with, instead of letting the property sit until the Bloodshot movie gets closer to reality, I don’t see how old readers or new ones will be drawn to it.