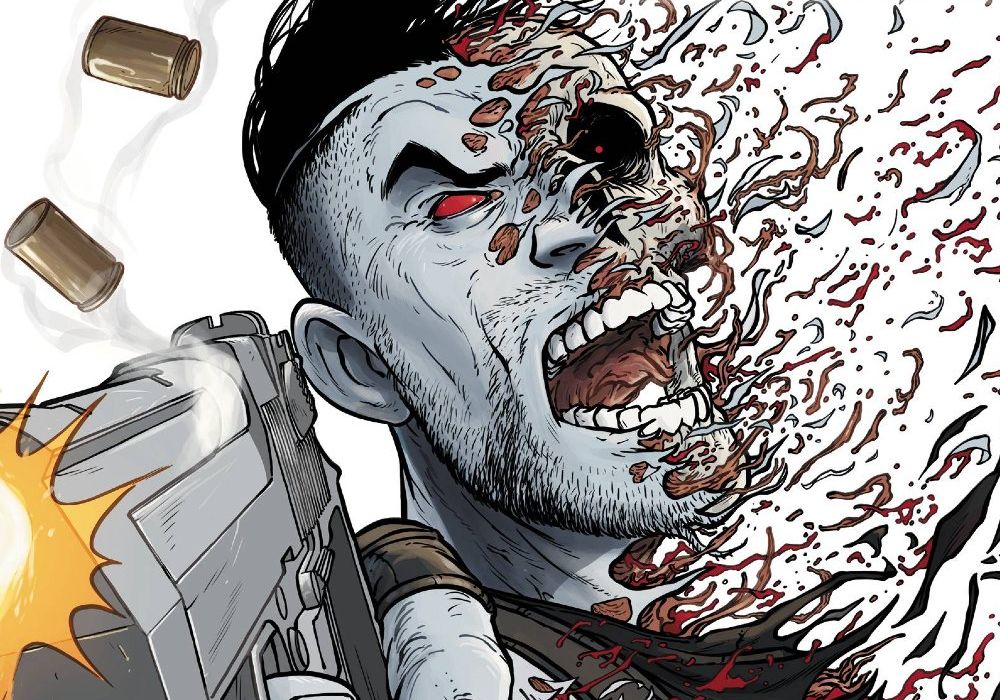 It seems that every stable of superheroes has some sort of augmented human soldier in their collection. It certainly makes sense, any fight between good and evil with the fate of the world at stake is bound to attract government attention and unless a country’s military is already made up of superhumans, said soldiers are probably going to need some sort augmentation if they want to go toe to toe with gods and monsters.

But there’s a deeper and more personal logic for adding normal soldiers to a superhero story. It allows the creators to discuss themes such as duty, honor, and humanity in epic stories in a way that readers can relate to and understand. Today, let’s take a look at Valiant’s latest story about their superhuman soldier, and one of their most popular characters, Bloodshot. 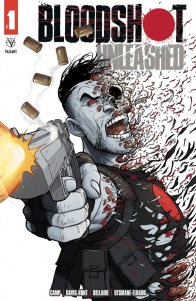 Dangerous super soldiers and bloodthirsty living weapons have mysteriously escaped into the world to wreak havoc across the dying towns and forgotten farms of America. Now, Bloodshot must take up arms again to travel across the country hunting down these violent monsters, battling his own demons, and defending the most defenseless. Deniz Camp (Agent of W.O.R.L.D.E.) and Jon Davis-Hunt (SHADOWMAN) join forces to unleash Valiant Entertainment’s first Mature Readers title that puts the BLOOD in BLOODSHOT.

“Bloodshot Unleashed” #1 opens with the titular hero at one of the lowest points in his life. He’s all alone in the ruins of a destroyed house with nothing but his memories and a bottle of booze that doesn’t do anything for him. What’s even worse is that his only escape is to shoot himself in the head, but the nanites in his blood prevent him from dying, no matter how many times he blows his brains out.

However, some small relief comes in the form of a mission offered to him by a desperate and angry government official who is willing to commit treason in order to save the lives of millions of Americans. It turns out that the program that created Bloodshot wasn’t the only super soldier program the American government was running, and in order to hide what they did, the United States military locked their experiments up in an abandoned missile silo and threw away the key. Unfortunately, twenty seven of them escaped and are now on the loose and seeking vengeance against a government and people that wronged them. Now, Bloodshot has to face off against a small army of pissed off super soldiers without any help or backup, starting with one Lieutenant Robert Chambers who possesses a small arsenal of interdimensional weapons.

From a writer’s viewpoint Bloodshot is a great vehicle to discuss themes like duty, humanity, and the struggle to balance the two while living a life of service. This is something that writer Deniz Camp does brilliantly in “Bloodshot Unleashed” #1 all while setting the stakes for the series and crafting a very well laid out action scene. Camp keeps the story tight and contained with a cast of just three characters, two locations, and one relatively drawn out action scene. With these kinds of limits there’s nowhere for the story to hide if the characters are poorly written or the comic is badly paced, but Camp manages it beautifully by understanding how Bloodshot works as a character and how to build an effective story around him. In this book Bloodshot is tired, jaded, and not in the mood the help anyone, but while the story could have offered the hero a chance to learn more about his past, Camp makes the interesting choice to get Bloodshot involved due to a combination of morbid curiosity, a desperate plea for help, and maybe a tinge of sorrow for the destruction that people like him will cause. Meanwhile, the government official and psychopath super soldier that Bloodshot meets are fascinating reflections of Bloodshot’s character, respectively personifying a sense of loyalty to something greater than country and blind anger at being stripped of one’s humanity to be used as a weapon only to be cast aside. It’s a great story that has a lot of great subtext and kicks off what promises to be one of the best Bloodshot comics in a while.

From an artist’s point of view, Bloodshot is a great vehicle to craft some stellar action scenes that do not have to hold back on the gory details or make excuses for how a regular human can avoid a hail of bullets and weapon fire and not be torn to shreds, and just like the writing Jon Davis-Hunt’s artwork on “Bloodshot Unleashed” #1 is perfect for the job. On a grand scale, the first thing that stands out is Hunt’s use of tiny panels scattered across the page. While it would be very easy for the reader to get lost on a page with fifteen panels, Hunt’s layouts are clear, well designed, and communicate the narrative flow to the reader very clearly, no matter how hectic the action gets.

In terms of artistic style Hunt tends to err on drawing characters with more realistic features, which really drives the violence and gore home to the point where it’s almost shocking. Bloodshot is the kind of hero who can be beaten, shot, and have his body abused in the most horrific ways and Hunt makes full use of his abilities by not shying away from showing the hero getting ripped apart and put back together. Hunt’s artwork, combined with Jordie Bellaire’s colors, create a desolate and terrifyingly violent tableau that is strangely pretty to look at.

“Bloodshot Unleashed” #1 is an awesome book that showcases everything great about Bloodshot as a character and as an idea. It mixes incredibly violent action with lots of blood and a heartbreaking story about the price of duty and being left behind by a world that has no more need for you.

Final Verdict: 9.5- If you like jaded super soldiers duking it out with crazy weapons and abilities all while lamenting how their government screwed them over, this is the book for you.