The latest piece of Jeff Lemire’s “Bloodshot” saga is picking up pace, and establishing the event as one of the most violent in Valiant’s history. 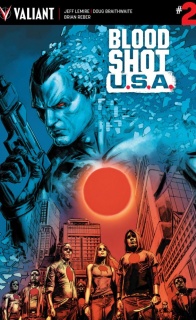 There are more than eight million people in New York City. And every single one of them just became Bloodshot.

With the flip of a switch, Project Rising Spirit has just infected every man, woman, and child in New York City with a designer “nanite virus,” instantly transforming them into hard-coded killing machines. Now, block by block, the citizens of America’s greatest metropolis are falling prey to their own destructive urges…and Bloodshot is the only soldier tough enough to go head-to-head with the entire Big Apple gone bad! With the humanity of an entire city on the line, Bloodshot is waging a one-man assault on Manhattan to root out the source of this machine-made infection before it hits the heartland… but will bullets and brute force be enough to stop the spread of a pandemic deadlier than anything in human history?

The city that never sleeps is about to get a wake-up call! Lock and load with New York Times best-selling writer Jeff Lemire (Old Man Logan, Moon Knight) and blockbuster artist Doug Braithwaite (NINJAK, ARMOR HUNTERS) as the most hostile comics event of the year heads into the heart of the concrete jungle!

One of the ideas that is touched on a lot in superhero comics is the tragedy of civilian collateral damage. In DC’s “Justice League” book, the current storyline is about how the team is dealing with the fact that one civilian was killed when their goddamned satellite base fell out of the sky. Sure, that one death is sad, but deaths like that (well, not exactly like that) happen all the time.

At the end of “Bloodshot USA” #1, phase two of Project Rising Spirit’s plan went into effect, which meant that anyone who had been to New York City in the past few months would be infected with the Bloodshot virus. In this issue, we see dozens, if not hundreds, of civilians infected by the virus and, in my cases, killed by the government in the name of being hostile, infected or not. It was jarring to read, and gave Lemire a nice shortcut to making sure the audience didn’t expect the government to swoop in and save the day at any point.

While Bloodshot is a notoriously violent character, I could see this being a truly shocking read to someone who isn’t a longtime fan. A lot was made in the Valiant press about this series being a standalone event, in an effort to bring in new, or lapsed, readers. And while all you need to truly know can be found on the recap page in the front of the book, that recap page is incredibly dense, and only really makes sense if you’ve been reading Bloodshot, or at least a few Valiant books in general, over the past year or so.

This issue, in particular, features Ninjak, Deathmate, and the Unity team as core characters, and while the short descriptions the recap page offers are a help, there’s a ton of context that is missing if a new reader were starting on this miniseries instead of, say, with “Bloodshot Reborn” #1. What makes this a tricky line to walk for Valiant is the fact that the average comics fan is probably less familiar with Geomancers and the like as they are mutants or the Bat family. I could give almost any comics fan “Court Of Owls,” and they have enough Batman knowledge to fill in the blanks with relative ease. That’s not necessarily the case with these characters, and while the first issue was a much easier read – due in large part to its flashback sequence – this one is a little thorny for a new reader.

The issue is full of action, and jumps between the battle on a few fronts, but the one that both works the best on both a plotting and a scripting level is the actions of the Bloodshot Squad. While this issue doesn’t give each individual member the space they’ve gotten elsewhere, there’s a real sense for the overall tenor of the team, and it is through their interactions that Lemire is able to inject some humor into the book. The image of the team squeezing into a minivan is probably the funniest bit in a Bloodshot book this year, and really helps cut the tension after a very rough issue and a half.

Doug Braithwaite is one of my favorite artists that Valiant employs, and his work here only reaffirms my enjoyment. He has to draw some pretty fucked up shit in this issue – like Bloodshot sucking the nanites out of a few folks – and I don’t mean it is fucked up just because it is a weird visual, but it is something that isn’t necessarily easy to imagine. Braithwaite does a great job translating tough concepts from the script to the page.

In addition, he does a great job giving each Bloodshot – from Ray to Viet Man to the random folks on the street – a bit of a unique look, while still dealing with the same blank slate of a white face. Braithwaite does what Lemire has so effectively done since joining the book, which is to humanize the character without taking away any of his edge. Braithwaite draws each ‘shot in such a way that they appear to be heartless fighting machines, and yet there’s no doubt that they are doing the right thing. It’s cool to see the balance between a man transformed into a trained assassin and someone who retains some level of morality.

It is morality that is the heart of this issue, as we constantly see the ‘shots, Ninjak, Magic, and others decide when or when not to play God, and what they consider to be the ‘right’ course of action. That is coupled with both the PRS, the US troops, and the brainwashed civilians, who do whatever will help them in that exact moment, damn the consequences.

If you weren’t on board with this event before this issue, I don’t know if anything will really tip the scales in its favor for you. But if you’ve been a fan of Lemire’s work on the character, and if you dug the first issue, you’ll really enjoy this issue. This is a nicely paced event (a lot hs happened in two issues), and seems poised to really do some fun stuff in the back half.